Book in a jar

'Book in a Jar' (NAL Pressmark: X900248), by Colin Hall, was acquired by the Museum in 1984. The object (height 15 x 19cm diameter) consists of a Kilner jar containing 'sour milk, German sketchbook/diary and fermenting rice' (typed description on the label signed and dated by the artist). The online Museum description explains that:

'Hall noticed the jar containing a small quantity of rice on his kitchen shelf one day and decided to place his German sketchbook inside it, cutting it up to make it fit. He then poured in a bottle of milk and sealed the jar. These curious contents are slowly decomposing in their air-tight container, the glass becoming murkier, the grains of rice resembling maggots. Gradually, this bookwork is undergoing a total physical change and turning into something new. It is one in a series of works in jars that Hall produced during the same period that focussed on the concept of containment and imprisonment'. 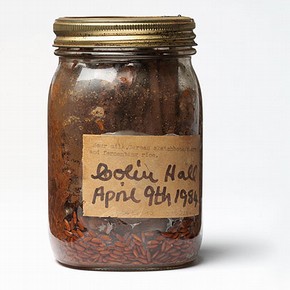 The moisture is causing high humidity resulting in decomposition and destruction of the contents.

In 2007, Book Conservation and the Science Section were contacted as National Art Library (NAL) staff had noticed that there was a strong smell in one of the display cases in the 20th Century Galleries.

On opening the case it was not possible to determine whether the smell was coming from the Book in a Jar or another book with bitumen covered cork boards, as the odour appeared to have migrated everywhere. The two objects were removed and isolated in containers in the Book Conservation Studio.

After a period of some weeks it became evident that the culprit was the 'Book in a Jar' - the cork of the second object had merely absorbed the smell. The gases being emitted through the corroded lid of the jar had left a strong odour within the container . 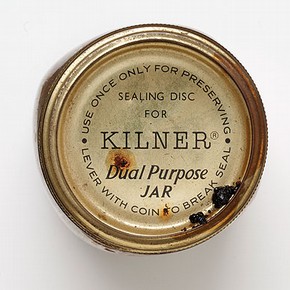 Brenda Keneghan of the Science Section arranged for analysis of the gases to be undertaken by Dr Lorraine Gibson of the Chemistry Department at Strathclyde University. Samples of the gases emitted were collected by leaving passive sampling tubes near the object for several weeks. The samples were analysed using gas chromatography/mass spectrometry. The components of the gases were identified as ethyl acetate, butanoic acid and phenol - corrosive compounds that could cause damage to other objects. It was therefore advised that the object should not be returned to its display case or storage in the NAL.

The expectation that 'Book in a Jar' might at some point 'require conservation' is noted on the NAL catalogue entry, hinting at the dilemma of acquiring objects that decompose. As conservators and custodians of our collections it is natural to wish to preserve objects for future generations but, as 'Book in a Jar' demonstrates, this is not always feasible. From a purely health and safety view, phenol is classed as toxic (a skin irritant and corrosive)1  and there is no suitable place to store an object emitting these vapours. This has therefore prompted the suggestion, by the Stock Control Manager in the NAL, to put the case forward for de-accessioning it. A report to this end has been submitted and is awaiting a response. The road from decomposition to de-accessioning may not be quite as predicted by either us or the artist.

My special thanks to Brenda Keneghan and Dr Lorraine Gibson for arranging and undertaking the analysis.