From Cloister to Museum

The conservation of stained glass takes you as close to the original designer/maker as it is possible to be, simply because one has to reverse completely the making process by taking the panel apart and handling every single piece to clean and repair it. Then the panel has to be put back together using the same basic tools and techniques used up to 900 years ago, although we now have electric soldering irons and tungsten or diamond glass cutters. Every activity after the assessment and conservation decision-making process leads you along the path followed not only by the maker but also by anyone else who has previously worked on the panel. Such intimacy means that the conservator's relationship with a panel goes beyond an academic or scientific appreciation or a purely visual understanding.

The V&A collections include a series of 38 panels from the cloister of the Premonstration Abbey of Steinfeld, in the Eifel region between Cologne and Trier. Some of these panels will be displayed in the new Medieval and Renaissance galleries, due to open in late 2009. The journey made from Steinfeld to the V&A is a dramatic and difficult one and it helps to explain how much change stained glass can undergo during its lifetime. The Steinfeld panels were made between 1522 and 1577, those produced up to 1537/8 having been attributed to the master glass painter Gerhard Remisch, whose monogram appears on one of the panels held by the Museum. As documented by Abbot Norbert of Horichem, these panels were removed from the cloisters in 1632, hidden to protect them at the beginning of the Thirty Years War and put back 12 years later. Between 1654 and 1785 the windows were removed and reinstated four more times. It is likely that they would have sustained damage and been subjected to some repair each time. The windows were finally removed in 1785 and eventually found their way to England by a well-documented route. 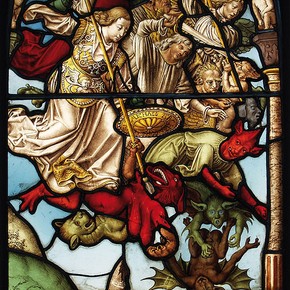 In the nineteenth century, after the 1798 French Revolution and during the Napoleonic Wars that followed, huge quantities of stained glass were removed from churches and monasteries in France and Germany. England became the primary market for this glass. John Christopher Hampp (1750-1825), a German cloth merchant who had settled in Norwich in 1782, and his partner William Stevenson were responsible for bringing to England much of the continental glass now to be found throughout the country. Much of this continental glass was used in churches to replace the glass destroyed during the sixteenth-century Reformation. Quantities of it were also set in the windows of private residences and chapels of the newly rich industrialists and by the mid-nineteenth century there was a well-established tradition of stained glass collecting in England. Lord Brownlow (MP for North Shropshire 1866/7) purchased many of the Steinfeld windows along with others from Mariawald Abbey, also near Cologne, and he had them installed in his new chapel at Ashridge Park between 1811 and 1831. It is at this point that the windows would have undergone their most radical changes. In 1928 the contents of Ashridge Park were sold at auction to a private collector who then donated the stained glass panels to the V&A in that same year. 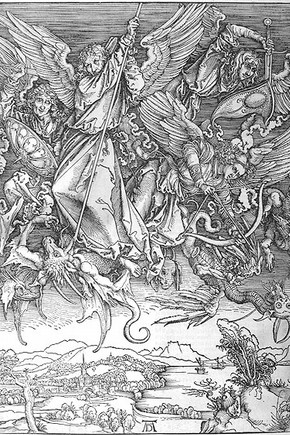 Stained glass is a monumental architectural medium designed for a specific location, light and purpose, either religious or secular. However, in order to install stained glass into another building it is necessary to alter its dimensions to fit the new setting. It is common to see borders added to make panels larger, and borders or columns removed to make panels smaller or more symmetrical for their new location. In the past, when dealing with areas of lost or damaged glass, it would have been common for either a new piece of glass to be cut and painted to match the imagery or for scrapped glass, bearing no relationship to the design, to be taken from redundant panels and cut to fit. At this stage it is highly likely that the intended installation order of the panels would have been completely lost.

In preparation for re-display, the panel depicting 'The Fall of the Rebel Angels' (C.307-1928) (Figure 1) required the removal of a large number of old repair leads to make the complicated, dramatic image easier to interpret. The design is based on one of a series of 15 Apocalypse woodcuts produced by Albrecht Dürer in 1497/8 entitled 'St Michael and his Angels fighting the Dragon' (25100:5) (Figure 2). It was immediately obvious that the panel had been significantly altered to fit a window opening in the Ashridge Park Chapel. The left-hand column had been removed and the arching canopy had been added to alter the shape of the top of the panel. The arched top of the panel would also have originally been separate from the lower rectangular section. It was apparent that several of the painted figures and devils were later replacements. When the glass was removed from the lead it was clear how complicated and difficult some of the cuts would have been even for a very experienced glazier. Moreover, the figure detail was painted right up to the edge of the glass resulting in lost detail that spoils the overall effect. This is often a mistake made by novice glass painters, as they forget that they need to allow for the lead flange to cover the edge of the glass. However, the quality of some of the painting indicates that the glass painter was very experienced and would not have made such a mistake. This would suggest that some of the original pieces may have been re-cut during later work to repair and alter the panel. This is illustrated by the head of St Michael: where the edge of the face is also the edge of the glass. 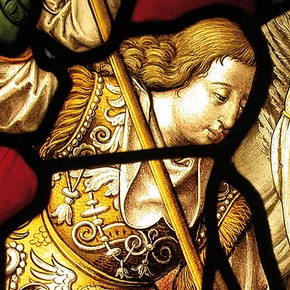 By the sixteenth century, glass production had advanced to enable glass to be produced in larger, thinner pieces, resulting in designs that included larger individual pieces when compared to earlier medieval panels. This thinner glass was more vulnerable and would crack or break more easily and fall out, resulting in permanent loss. The section of painted glass to the right of St Michael is a later replacement and it may be that the glazier reshaped St Michael to fit better with the replacement. The Angel immediately above and behind St Michael appears to have been changed to include robes of red and green glass. Not only is it more likely that this angel was originally painted and silver stained in its entirety, but also the glass used and the quality of painting on the robes indicate that these are probably later replacements. 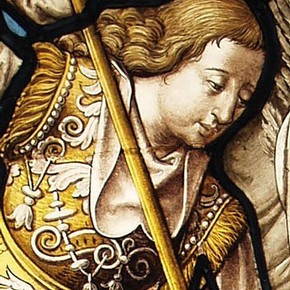 Following the removal of as many of the repair leads as possible and the bonding of the glass, decisions had to be taken regarding the width of the leads to be used when reglazing. It is usual to select leads that are as close to the size of the original leads as possible. However, in this case, the decision was taken to use 3 mm leads around the pieces where the detail was painted right up to the edge, instead of the more normal 6 mm leads (Figures 3 and 4). The overall result is a panel that is much easier to interpret than before, showing as much of the detail as should be seen, increasing the potential enjoyment of the viewer and displaying the panel to its best advantage.