The second half of the twentieth century saw extensive development of materials such as plastics, fibreglass and foam for use in furniture. The 'Globe Chair' (Circ. 12-1969), also known as the Ball chair, was designed by Finnish designer Eero Aarnio and exemplifies the use of these materials. It was acquired directly from the manufacturer, Asko Furniture Manufacturing Company, by the Victoria and Albert Museum in 1969. Now, several decades after manufacture, many of the modern materials used in the manufacture of the 'Globe Chair' have changed in their appearance and mechanical properties. The chair therefore required radical treatment to be included in the V&A exhibition, 'Cold War Modern: Design 1945-1970' (25 September 2008 to 11 January 2009). While the fibreglass reinforced polyester shell had remained stable with the external gel-coat suffering only minor abrasions, the appearance within the shell had changed dramatically. The interior had begun to hang limply rather than maintaining the crisp profile intended by Aarnio. The adhesive applied between the orange-red show cover textile and the foam under-upholstery had degraded and failed, leaving the textile unsupported, especially on the top interior of the shell where the textile hung down.

The upholstery within the shell is lined with five concave segments or wedges of pre-formed polyurethane foam with a show covering of an orange, plain weave wool textile. This is stitched to a self piping on the inner rim of the shell with the underside of the textile adhered to the foam. The edges of the fabric covering the five segments overlap onto the underside of the foam and were adhered in place. Based on visual and ultra-violet light examination before treatment, the foam appeared to be merely held in place by compression of the foam segments.

As the foam still maintains some flexibility when compressed and has not degraded into a powdery dust (which is the degradation typically seen in foams), it was decided that it should be retained and a treatment that might enhance its longevity be considered.1 Whilst being aware that the textile would outlive the foam indefinitely, we aimed to create an option enabling future re-treatment and the opportunity of removing degraded foam while retaining the show cover.

Besides reviewing current literature, we contacted: Dr Joelle Wickens, a former PhD student at the Textile Conservation Centre, University of Southampton, specialising in the fabric/foam interface on the Globe Chair;2  Tim Bechthold, Head of Conservation at Die Neue Sammlung in Munich, experienced in the conservation of twentieth-century materials; as well as scientists and textile conservators at the V&A.

Based on the gathered information, we conducted informal testing using several recommended adhesives and methods. We experimented with two types of adhesives for the interface between the fabric and foam:  the first was a 2:1 mixture of Lascaux 360 HV and 498 HV, thermoplastic acrylic adhesives, in test concentrations by volume of 50%, 25%, and 10% diluted in de-ionized water; the second was Beva 371 film, a thermoplastic elastomeric polymer mixture. Impranil® DLV, a polyurethane dispersion, was tested as a consolidant for the foam. Our results provided us with the following information: 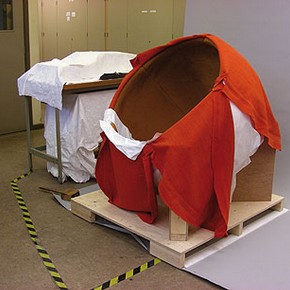 After these findings, as well as discussions with the colleagues mentioned above, Elizabeth-Anne Haldane, V&A Senior Textile Conservator, suggested that, in addition to coating the foam with Impranil, we should try conservation-grade nylon net as a carrier for the Beva. The addition of the net would aid removal of the Beva 371 film and thus help to reduce the adhesive residue left on the textile when it needs to be removed in future. This combination proved to be the most successful test we conducted.

To initiate treatment, the textile was peeled back to the inner rim of the shell exposing the foam. The manufacturer's adhesive between the textile and foam had degraded leaving the textile almost adhesive free. Fourier Transform Infrared Spectroscopy (FTIR) conducted on the original adhesive by V&A scientist Dr Brenda Keneghan indicated that this was a neoprene (rubber based) adhesive, which degrades in the presence of oxygen. Based on this information, it was not surprising the interface had failed. 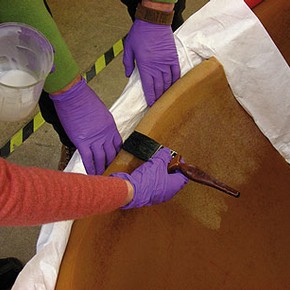 To facilitate the treatment, V&A Technical Services technicians built a cradle to support the shell and allow removal of the metal base plate, providing flexibility and accessibility to rotate the chair and attain the correct upholstered profile. It was decided to apply the adhesives in-situ so that the stitched edge of the textile around the inner rim of the chair would not need to be disturbed (Figure 1). Using this method, one foam wedge at a time could be worked on. To begin the multi-step process, the foam was coated with Impranil and allowed to dry (Figure 2).

A template, based on the size of the foam wedges, was made to prepare a net and Beva film. This was first adhered together on a work surface with a heated spatula and barriers of Melinex film and then laid onto the foam. Darts had to be cut in the Beva/net layer to enable it to lay flat on the concave surface of the foam. It was then adhered onto the surface of the foam with a heated spatula and barrier of Melinex. After this application, the textile was then laid onto the Beva/net and heated with the spatula, but due to poor adhesive penetration into the textile there was an insufficient bond to hold the textile in place. 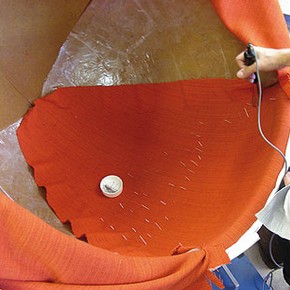 The original materials have been kept, the shell's interior profile has been restored and the treatment executed anticipates the eventuality of the foam's degradation and replacement while retaining the original show cover textile.

1. Van Oosten, T., Keune, P., 'Chemical Analysis of the Materials Used', Modern Art Who Cares?, The Foundation for the Conservation of Modern Art and the Netherlands Institute for Cultural Heritage, Amsterdam (1999)