The V&A has a renowned collection of Indian pictorial art; less well known are the substantial number of watercolours by British artists who visited India and faithfully recorded the landscape and the peoples they encountered. Artists were employed by the East India Company which controlled British interests in India from the time of the first diplomatic mission to India in the early seventeenth century until British Concessions in the subcontinent were taken over by the British Crown in 1858. The works produced by these artists were a vital source of documentary information in an era before the advent of photography. These pictures allowed the British public enticing glimpses of the exotic and diverse cultures of India. 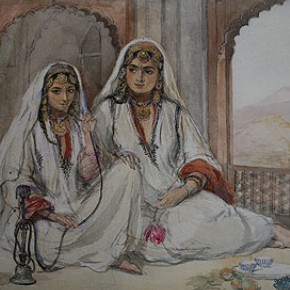 The idea to stage an exhibition about British artists working in India came to fruition during a visit by the author to Mumbai in 2002. Discussions with CSMVS (formerly the Prince of Wales Museum) revealed a desire to stage an exhibition featuring works on paper from the V&A. The Paper Conservation Section at the V&A had previously conserved a collection of almost 200 watercolours by William Carpenter, as well as a smaller number of works on paper by William Simpson - both British topographic artists and illustrators. This comprehensive collection of paintings included watercolours of all of the major sites in India - the Taj Mahal at Agra, the Golden Temple in Amritsar and a series of penetrating studies of Indian people, as well as numerous scenes depicting everyday life. As a result of both artists training as illustrators they took particular care to make their renderings of people and places accurate, an aspect which makes their work valuable as a source of  documentary reference.

As the themes of the exhibition developed, works by British artists representing other genres were included. Paintings by Thomas and William Daniell were a natural addition as they represent a more picturesque response to the Indian landscape and its monuments. The works of Lockwood Kipling depicting various craft activities were also an important asset to the selection as they provide valuable documentary evidence of the goods which helped put India on the world map. Gradually, a plan evolved of an exhibition which would encompass the works of a wide range of British artists who had worked in India and would make use of the current research on the subject as well as the comprehensive collections of the Word & Image Department and the Asian Department at the V&A. A generous grant, provided by the World Collections Programme, allowed a contract conservator to be employed and helped to fund the cost of packing, freighting and transporting the exhibition to India.

In its current form, Indian Life and Landscape comprises over one hundred watercolours and oil paintings of Indian subjects. The exhibition opened at CSMVS in Mumbai in December 2008 and is destined to tour other venues in the Subcontinent in early 2009. Although the V&A has always had very strong links to India in the past via its collections, this exhibition represents an important step in establishing stronger links with institutions in India which, it is hoped, will pave the way for future loans and co-operation. This process has been greatly assisted by the inauguration of a new purpose-built temporary exhibition gallery in Mumbai (the Premchand Roychand Gallery) and by the ongoing working relationship of the V&A and CSMVS, which has resulted in sharing of both conservation and curatorial expertise. 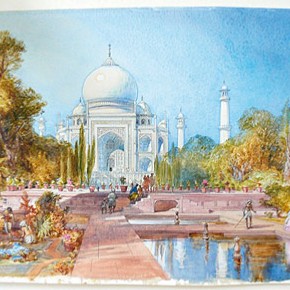 Packing and transport of this exhibition has presented some interesting challenges and dilemmas. In order to limit freight costs, it was decided to send the works out to Mumbai mounted - the framing would be done in Mumbai under the supervision of V&A Conservation staff. The Exhibition Gallery and new Conservation Studio at CSMVS greatly facilitate the unpacking and preparation of travelling exhibitions. The provision of this space was particularly pertinent to the Indian Life and Landscape project which required a climate controlled area in which mounted works on paper could be framed. The only exception to this rule was the inclusion in the show of a landscape watercolour entitled West View of Ramgiri by John Ritso on parchment (IS.169-2007) - this was transported framed and sealed into a frame incorporating Art Sorb® silica gel tiles to minimise the fluctuations in relative humidity occurring within the microclimate formed by the package.

Many of the watercolours in this exhibition have required extensive conservation treatment, including removal of old cardboard backings, washing to reduce staining and occasionally repair and infilling of damaged areas. Many of the original paintings by William Carpenter had already been previously conserved, but still required condition reports and careful re-assessment. Quite a few of the watercolours appeared to have been exhibited for prolonged periods and showed signs of overall discolouration of the paper as well as noticeable fading of pigments. In a few cases it has been possible to improve the appearance of these works slightly by float-washing to remove soluble orange-brown discolouration - this has helped to partially restore the watercolours to something of their former appearance. In all cases they have been mounted to show as much of the composition as possible, which in some cases clearly reveals the extent to which the original colour balance has been altered by fading. In a few cases the preparation of works of art on paper has lead to some interesting discoveries concerning the materials and techniques. Examination of a work by Robert Melville Grindlay, Young Konkani Woman in a Purple Sari (IS. 03539), previously thought to be an oil sketch, revealed that it was an aquatint that had been painted over with a layer of oil paint and then varnished. This was confirmed by using infrared photography that revealed the underlying printed outline.

Indian Life and Landscape is the first exhibition organised by the V&A to tour India and acknowledges the need for access to the Museum's collections by the culturally diverse audiences of the Subcontinent. It is believed that this will help to lay the foundation stones for future projects and the continued exchange of expertise and knowledge between the V&A and the many museums and cultural organisations in Asia.