Investigation of a Victorian ornithological adornment

The Victorians tend to be remembered for doing things with exuberance and flair, and their penchant for wearing entomological and ornithological specimens was no exception. In the mid- to late-nineteenth century: 'The proliferation of such adornment in middle-class life belied an increasing disengagement from nature brought about by the industrial revolution… [providing] an opportunity for women to reconnect with nature'.1  Ladies would embellish their dresses with beetle carcasses and colourful feathers; hats were fashionably arranged with entire birds stuffed and poised amidst their natural foliage, while goldsmiths tended to make use of smaller birds to add the finishing touches. With the opening of natural history museums on either side of the North Atlantic, women's journals of the day encouraged women to skin and mount their own creations, while established goldsmiths and jewellers manufactured bespoke items. 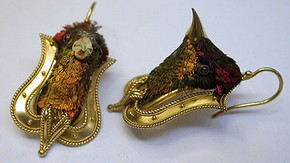 One such example from this period is the exquisite ruby-topaz humming bird earrings (M.11:1&2-2003) recently conserved for display in the new William and Judith Bollinger Jewellery Gallery (Figure 1). Just over 3 cm in height, the birds' heads are delicately mounted on gold with the back of the earrings stamped with the maker's mark for Harry Emanuel and Patent No. 1779 (Figure 2).

Harry Emanuel's Patent No. 1779 dated 5 July 1865 states:
'The object of my Invention is a new manufacture of or improvement in ornaments for personal wear... For this purpose I form a setting frame, back for mounting in gold, silver, or other metallic substance or rigid material, by casting, cutting or otherwise, and in any desired shape; to this I affix feathers or plumage of birds, preferring those which are celebrated for their varied effects of colour and light; I attach them by means of shell lac, or other mastic or cement, or adhesive substance, by which a firm adhesion is obtained... By these means a wholly novel article of manufacture is obtained'.2 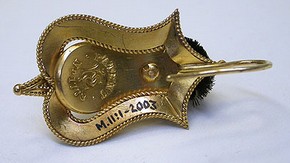 Analysis was carried out to understand Emanuel's manufacturing techniques and if they were different to traditional taxidermy techniques.

The earrings were tested for heavy metals by Dr Lucia Burgio, Senior Object Analysis Scientist, using X-ray fluorescence (XRF) to see if arsenic was present in the humming bird heads. This was suspected as arsenic powder or solution was widely used in taxidermy during the nineteenth century. An ArtTAX XRF spectrometer (50kV, 600 µA, livetime 100s) showed significant levels of arsenic. Appropriate labels and handling procedures were then provided for conservators, curators and technicians.

Four feathers had become detached and needed to be replaced. Although the head of one bird (M.11:2-2003) was missing more than four feathers, the size and colour of the loose feathers matched this area so they were replaced with careful spacing to fill in the gap as much as possible. Using a microscope, the attached feathers were gently lifted using a steel spatula and each of the loose feathers reattached to the head by dipping the tip of each feather into Mowilith® 50 (a poly(vinyl) acetate homopolymer) in acetone for adhesion.

The matt gold mounts, settings and red glass eyes were lightly degreased using Industrial Methylated Spirit (IMS) on a cotton swab. Small spots of dark oxidation were found on the borders of the gold mounts. These were most likely to have been caused by the use of a lower alloy solder. A matt surface texture can be easily damaged if an incorrect manual or abrasive treatment method is used. Therefore, Goddard's® Silver Dip was chosen as the most suitable material to remove the dark areas of oxidation and even up the original colour of the surface. Goddard's Silver Dip was diluted with de-ionised water and lightly applied with a cotton swab before repeated rinsing with IMS. 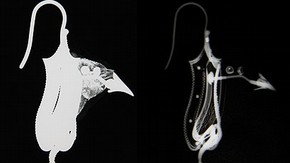 Figure 3. An X-ray showing the internal structure of the earring at 35KV and the metal wires at a higher KV. (X-ray taken by Paul Robins, Photography by Phil Sofer). (click image for larger version)

X-rays revealed more about the internal manufacture of the earrings. One X-ray, taken at 35KV, shows that the birds' skulls are present, which is consistent with traditional taxidermy techniques (Figure 3). A small amount of organic adhesive can be seen on one earring behind the feathers and on top of the gold mount. The organic residue is too small to test without damaging the bird. The X-ray confirmed that organic adhesion would have been the main attachment method between the bird and the mount as there were no tell-tale wires or pins connecting the two - this corresponds with Emanuel's patent. The X-ray also revealed that the eyes had been pinned directly into the heads' stuffing material, which can be seen behind the settings when viewed under a microscope. It is difficult to tell whether any part of the natural beak is still present due to the gold beak attached in its place. The X-ray reveals that the gold beak is connected to the backing mount with an internal wire. It is most likely that the natural beak was snipped short and the gold beak inserted over it before being riveted onto the back of the large gold mount, further strengthening the attachment of the bird to the mount.

The earrings are now on display in a drawer unit for the benefit of the feathers as their colours tend to fade over time in light higher than 50 lux. The conservation carried out has allowed the earrings to look more complete and as they were originally intended to look. From the XRF analysis, the presence of arsenic raises an important health and safety concern. The presence of arsenic and the skulls validate traditional taxidermy procedures inferring that Emanuel did not have to alter traditional methods to accommodate his new patent.

I am grateful to Marion Kite and Ann Eatwell at the V&A, and Katrina Cook and her colleagues at the Natural History Museum.