In August 2007, a post was created for a Condition Reporting Administrator (CRA) within the Conservation Department of the V&A. The job was initially set up as a trial with the aim of relieving conservators of some of the administrative burden and to see whether savings could be made by streamlining the condition reporting process. 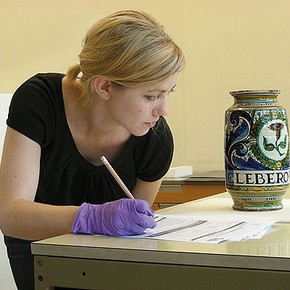 The preparation of objects for loans and touring exhibitions is one of the V&A conservators' many responsibilities. In order to qualify for Government Indemnity the condition of each object must be accurately recorded at key stages during a loan or exhibition when responsibility is transferred between the owner and the borrower. If there is a significant change in the condition of the object, the Government will pay appropriate compensation, based on the evidence recorded in the report. With over 3000 objects leaving the Museum last year, as loans or as part of touring exhibitions, the preparation of such condition statements can be time consuming. It is estimated that the completion of 3000 reports requires the equivalent of 1.25 full-time conservators.

The Conservation Department has become increasingly effective in delivering a wide-ranging programme of work which not only includes loans and touring exhibitions, but also involves the preparation of objects for gallery refurbishments and in-house exhibitions. In an endeavour to find more efficient ways of delivering a demanding work load, traditional attitudes and practices are frequently challenged. As part of this, a review of the loans process suggested that many aspects involved in the preparation of condition statements could be undertaken by a non-conservator with appropriate skills and training, enabling conservators to focus on more practical aspects of their role.

Centrally located in the Administration Section of the Conservation Department and directly accountable to the Head of Sculpture, Metals, Ceramics and Glass, the position of CRA was set up to support both the Conservation and Exhibitions Departments. The job description included:

Helen Nodding (Figure 1) was appointed to the post having had experience in several other Departments across the Museum and, consequently, possessing a good knowledge of the Museum and its systems as well other skills beneficial to her CRA role. She also received extra training from conservators, in-house photographers and exhibitions staff in order to develop the job. With no precedent, the role has very much pioneered a new approach, responding to the needs of conservators and exhibitions staff. Within four months, savings and efficiencies had been made to such a degree that a successful business case was made to make the post permanent. 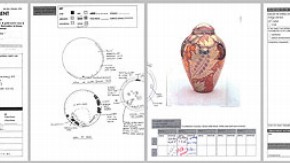 The position of CRA provides a unique opportunity to gain a thorough insight into how the condition reporting process works across the entire Conservation Department. Shortly before the post was created, the old condition statement form had been redesigned. Using this template as a starting point, Helen was able to work alongside conservators, reviewing practice and identifying where further improvements might be made.

Research investigating condition statements revealed that, historically, approaches to recording information relating to the condition of objects had been inconsistent across the Department; methods included combinations of a general statement accompanied by annotated images (hand-drawn or photographic with an acetate overlay). Photographs often only displayed one view of an object and were frequently small or unclear (Figure 2). In practice, these statements were often confusing, and problems would arise during long multi-venue exhibition tours where several different couriers were involved. When checking an object at de-installation, the couriers often had difficulty distinguishing between old and new damage, and so would mark any areas of uncertainty on the statement. Consequently, by the end of a tour the statements were often so heavily annotated that they became difficult to read, making it tricky to assess the final condition of an object. 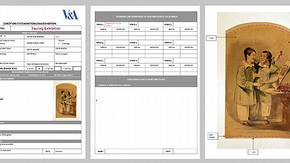 In order to reduce the need for annotation, a key aspect of improving the condition statements has been to include excellent photographic documentation, comprising images of each side of the object as well as detailed shots of any areas of damage. The CRA developed skills in digital photography, photo-editing software (Adobe Photoshop®) and Microsoft® Office. The improved format saves time during the assessment and condition-checking stages. Hard copies of statements are printed out to accompany the objects during the loan or exhibition. Files can also be saved electronically (allowing statements to be reused more quickly and efficiently than the older paper versions, to form the basis of future condition statements).

To encourage uniformity, a guidance document was created to help conservators by suggesting standardised fonts, colours, layout and the inclusion of a thumbnail image on the front of the report to act as a quick reference guide an idea instigated by the Furniture Conservation Studio.  In experimenting with ways to create an entirely digitised version of the condition statement, Microsoft® Word was found to offer the simplest option (Figure 3). The CRA has been working with individual conservators training them in the use of the appropriate software to create digital condition statements.

Apart from assisting conservators with the production of condition statements, the role has also expanded to accommodate courier trips, researching methods of condition reporting within and outside of the V&A, and contributing to the Condition Checking for Couriers workshop.

The introduction of the CRA post at the V&A has resulted in benefits that include saved time (and money) for conservators and exhibitions staff as well as improvements to existing Museum practice. The Museum is gradually paving the way towards creating a fully digitised system with the potential for a centralised digital archive for condition statements. Considering the progress made over the past year, this may not be a too distant goal. As a testament to the success of the post, the innovations established have attracted attention from other large cultural institutions hoping to move in a similar direction.