By the time of this Journal's publication, the V&A's major autumn exhibition Cold War Modern: Design 1945-1970 will have closed at South Kensington and embarked upon its international tour. Of the wide variety of material on display; including furniture, automobiles, ceramics and textiles, there were over 130 posters and other paper items, composed of both loans and V&A objects. Items as diverse as Raymond Loewy's designs from his time as habitability consultant for NASA (E.650-1981), Ken Adam's set drawings for Stanley Kubrick's Dr. Strangelove and a large cinema poster for Andrei Tarkovsky's Solaris , (E.537-2008) all required some form of mounting and framing for display and eventual touring. 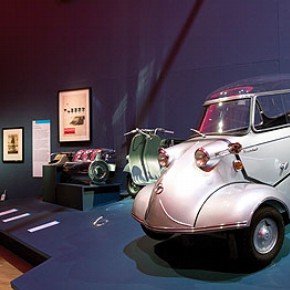 Early involvement was crucial to the successful staging of this exhibition. Communication between Conservation and the Exhibitions Team was, as ever, excellent, with lucid and extremely helpful information being shared. Also shared was an enthusiasm to make the objects look as fantastic as possible. It was settled that there should be a cohesive look and design to the mounting and display of the posters and other graphic material. For previous exhibitions, such as A Century of Olympic Posters (V&A Museum of Childhood, 17 May-7 Sept 2008), posters were lined with Japanese paper to give a margin which could then be wrapped around a support board.1  Alternatively, many had tabs of Japanese paper attached at intervals on all sides. These tabs were then slotted through slits in a support board and adhered at the back. Depending on the thickness of the poster, this had sometimes resulted in a slight bulging where the tabs had been attached with wheat starch paste. It was noted in some instances, particularly after a long tour, that parts of the posters which were not attached with tabs were free to cockle and undulate. 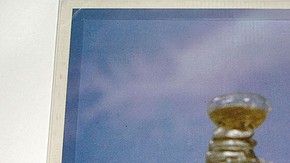 A number of the posters on the Cold War Modern: Design 1945-1970 tour are printed on very thin paper and, even if the thinnest Japanese paper was used as a tab, this would have been visible from the front. There is also the important issue that many are not Museum objects, and permission would have been needed from each and every lender in order to undertake any treatments. With consideration to staffing and time constraints, it was decided to try and implement a mounting technique which would require no intervention to the objects at all, except where absolutely necessary.

New techniques of mounting, object attachment and display are always welcome, and the Preservation Conservation Studio is well-placed to explore and develop new ideas. The aim was for a neat, unobtrusive method, which required no attachments to be made to the objects and could be relied upon to endure a multi-venue tour. 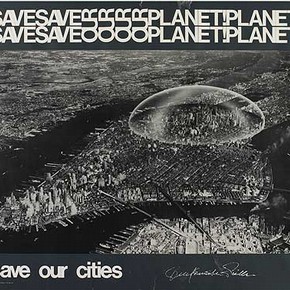 Figure 3. E.137-1972 'Save our Planet, Save our Cities' Dome above Manhattan by Buckminster-Fuller, 1962 (Poster produced by Olivetti) (Photography by V&A Photographic Studio) (click image for larger version)

The poster is placed between two sheets of Melinex® polyester film; the front piece having had a proportional aperture already cut out. Depending on the object's size, a border of 10-15mm is usually sufficient. Using an ultrasonic welder, the two sheets are joined together around the edges of the poster. The excess Melinex edges are then neatly trimmed off as close to the welded edge as possible. This package can then be attached to a support board by a variety of means. One method used was to place Tesa® double-sided tape on the verso and attach it to a support board. When positioning the package on the support board it is necessary to apply gentle pressure to ensure full adhesion. This can be done with a thumb and a protective piece of Bondina. Care must be taken however to apply the pressure as close to the welded edge as possible, otherwise there is a danger of the polyester edge making an impression on the object. If desired, tabs of Japanese paper could also be used to attach the Melinex package to the support board.

For very thin posters, where there may have been a danger of horizontal slippage, small hinges of Japanese paper were attached on the verso at the top with wheat starch paste, and passed through slots in the back sheet of Melinex and held in place with tape. The narrow Melinex border is not visually distracting as one might expect; particularly when it is displayed behind glass or Perspex® . In fact, it gives a clean, neat look and holds all edges and corners of the poster flush to the support board.

The technique was first used for China Design Now, the V&A's spring 2008 exhibition, where the posters were displayed in Perspex boxes. The exhibition is still touring and the mounting technique has proved very successful and dependable. As with A Century of Olympic Posters, the posters for China Design Now required customised frames of varying sizes. With Cold War Modern: Design 1945-1970 it was decided, where possible, to group the posters by size and display them using V&A standard frames. This simplified the packing requirements for the touring objects and was also more cost-effective as the frames can be re-used for future displays.

Conservators often have to respond to a wide range of demands, some possibly deemed unreasonable, during the staging of any major exhibition. It is always to be hoped that an approach of equanimity and commonsense can produce an equally uncomplicated and inexpensive method of display.

I am grateful to my colleagues in the Paper, Book and Preservation Conservation Studios.

1. Battisson, Gingell and Fleury, 'Conservation mounting at the V&A: an overview of techniques' , in Art on paper: mounting and housing, Rayner, Kosek and Christensen, eds. (Archetype Publications in association with The British Museum, 2005), pp. 131-137