'Virgin and Child with Two Saints' (766-1865) was painted by Bernadino Fungai around 1480 and is being treated in the Paintings Conservation Studio for inclusion in the Medieval and Renaissance Galleries. Fungai was born in 1460 to a family from Fungaia, near Siena, and by the age of 21 was working with Benvenuto di Giovanni, raising the possibility that the two were master and pupil. He was active at a point in Italian art when there was a change to a more naturalistic style, away from a 'flat', Byzantine depiction of form to the more three dimensional approach of the Renaissance: the Virgin's halo is a tooled gold circle, while the haloes of the saints and the Child are foreshortened. It was also a time when artists were moving from the use of tempera (egg yolk) to oil as a paint medium. These transitions were not straightforward, as artists and craftsmen experimented with their materials and the depiction of perspective, but this work provides a chance to observe some of the developments in practice.

The work is on a single poplar panel (62 x 42 cm) which has previously been thinned and a wooden cradle applied to prevent warping. Traditionally, fifteenth-century panels would be prepared with a layer of fabric stuck to the surface of the wood with animal glue prior to the application of gesso ground layers. In this panel, no continuous layer of fabric is present, possibly as it was not deemed necessary for such a small work on a single panel. However, X-radiography reveals that there is a patch of fabric covering a small split in the wood at the lower edge. This fabric lies underneath the ground layers, revealing that the workshop was aware of this defect in the wood and added the fabric in an attempt to protect the subsequent paint layers from cracking. 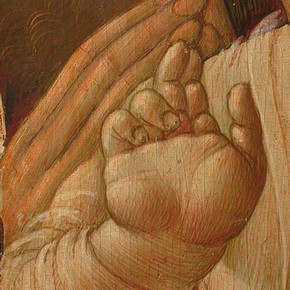 In 'Virgin and Child with Two Saints', the flesh paint is made in egg tempera, while the blue robe and red glazes applied on top of the gold are in oil. Later works by Fungai, such as 'The Virgin and Child with Cherubim' at the National Gallery, London, are entirely in oil1  and, while we cannot be sure of the exact reasons behind the use of different media in this work, we can be certain that it was a considered decision to achieve certain effects as the understanding of the possibilities afforded by oil paint increased.

While Fungai's understanding of oil paint was still developing, his mastery of the technique of painting in tempera was fully evolved. Individual, short brush strokes are visible in the flesh paint - a characteristic of quick drying tempera which does not allow blending like oil paint (Figure 1). The subtle pink tones are skilfully modulated with fine lines. Green earth underpaint, visible where the upper paint layers are worn in the saint on the left, was traditionally used to model facial features before the application of the pink tempera flesh tones, also helping to achieve the cool depth of colour that blood perceived under skin gives.

The Virgin's robe, painted with the natural mineral azurite ground in an oil medium, was originally bright blue but has discoloured considerably over time (Figure 2). In oil, azurite is prone to blackening at the surface in addition to the oil medium itself darkening - although the exact mechanism for this is not yet fully understood.2  It is likely that a previous restorer had seen tantalising glimpses of bright blue under the blackened surface of the paint and decided to scrape down the darkened upper layers to reveal the remaining blue pigment beneath. This rather drastic treatment meant the loss of any modelling in the folds of cloth and the mordant gilding border, leaving a coarse, uneven surface. 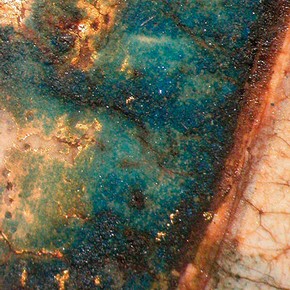 The once bright blue robe with delicate drapery is now a flat, mottled brown. This is the artist's original paint, even if not the original paint surface, and we can only guess the exact colour blue the robe may have been and how folds in the cloth may have been depicted. All paint layers go through visual changes as they age, some more drastic than others, and sometimes with help from well-meaning restorers. However, because we cannot know exactly what may have been lost, we cannot restore it; we feel we must accept the robe in its current state, as unfortunate as this is.

This is the first time that the panel has been cleaned since it arrived in the Museum in the mid-nineteenth century and the result was rather dramatic (Figure 3). Thick layers of natural resin varnish made yellow with age, layers of dirt and dark spotty retouchings obscured the original subtle colouring and delicate brushwork of the tempera flesh paint. Gilded areas had the same thick varnish layers, whilst some areas around the head of the Virgin had been over-gilded to disguise the slightly worn original. The punch-work on the gold appeared black, filled with dark varnish and dirt, which prevented it reflecting the light as it was meant to. After cleaning, the gold regained its lustre and it is now easier to imagine how this small devotional work would have looked, the haloes glittering as the tooled surface caught the candle light. 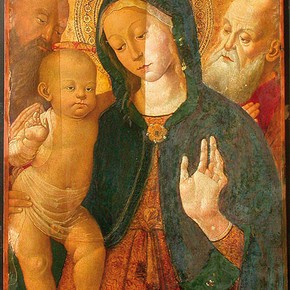 There are various documented copies and versions of this work, one of which is at the J. Paul Getty Museum in Los Angeles. The Conservation Department at the Getty have been kind enough to examine their version to allow comparison with our painting. It was common practice at the time for workshops to use patterns or cartoons to transfer popular images onto multiple panels. It is possible that a workshop might have made a single cartoon for a particularly popular composition, or that they may have had a stock set of cartoons that they could combine together in different ways. While no evidence of pouncing has been found on either work as yet, by overlaying the Getty and V&A versions we can deduce that they were made either from the same cartoon, moved around during transfer, or from individual cartoons for the Virgin and saints and for the Child, and that the separate forms were placed closer together within the confines of our slightly smaller panel.

I hope to have given insight into the complex techniques employed in this one small devotional panel - woodwork, gesso, gilding, oil paint, tempera paint, mordant gilding, punch work and glazed gold - and shown that it dates from a period of transition in Italian artists' technique. We continue to investigate the relationship with the Getty's Fungai and are anticipating that further understanding will be gained in the future.