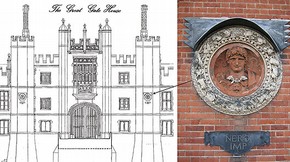 In the late 1510s, Cardinal Thomas Wolsey commissioned the Italian sculptor Giovanni da Majano to create eight painted and gilded terracotta roundels ('octo rotundas imagines, ex terra depictas et deauratas'), each representing the bust of a Roman emperor.1  The roundels were destined to decorate Wolsey's newly-refurbished palace at Hampton Court in Surrey. In the following years, further sets of similar terracotta roundels were also made for other residences, such as Whitehall Palace.

Remarkably, the set of roundels survives at Hampton Court Palace in its original context, nearly 500 years since its manufacture. Presently there are a total of 10 roundels mounted on the exterior of three gatehouses (Figure 1) and, in addition to these, a single roundel of a Roman empress is kept in store within the palace. The addition of three roundels to the original Wolsey set of eight is accounted for by historic repair and restoration programmes. 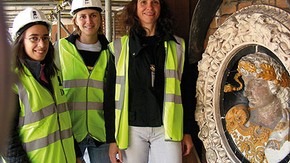 During the early 1840s, two or more roundels were taken to Hampton Court from other sites and an extensive programme of restoration was concurrently undertaken on the entire set

Historic Royal Palaces, the independent charity that looks after many famous London landmarks (including Hampton Court and the Tower of London), initiated a full investigation into the terracotta roundels in the hope of discovering more about their history, manufacture and condition. As part of this project, samples from the roundels at Hampton Court (Figure 2) were analysed at the Victoria and Albert Museum by optical microscopy and at University College London by Raman microscopy.

This analytical programme aimed to determine how the roundels were originally decorated or subsequently redecorated by identifying whether traces of the original polychromy, or of any later intervention, were present.No unequivocal evidence for the survival of the original polychromy was found. However, modern pigments (Prussian blue, chrome yellow and chrome orange) were detected in some of the samples taken.2,3 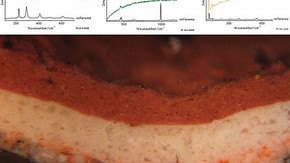 Eight of the roundels contain at least one modern pigment. Moreover, chrome yellow (first synthesised in the early nineteenth century) was detected in some of the layers applied directly onto the terracotta busts of Trajan and Hadrian.This shows that, at least for some areas of these roundels, there is no original polychromy left and that the layers which can be seen today were applied in the nineteenth century or later. Prussian blue (first year of manufacture 1704) was detected in many of the outer terracotta-coloured layers of the Tiberius, Augustus and other roundels.

Many other more traditional pigments were found on the roundels, including red lead, lead white, calcite, barite, vermilion, carbon black and haematite. These could have been part of the original polychromy, as one would expect to find them in the sixteenth-century artist's palette. However, the position of these traditional pigments in respect to the layers containing modern pigment indicates that they were applied during or after the nineteenth century. 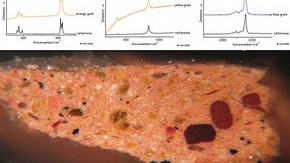 Figure 4. Cross-section from a maroon-coloured sample from Tiberius viewed under 400x and Raman spectra of lead chromate, chrome orange and Prussian blue obtained from various inclusions in the sample. (Photography by Lucia Burgio) (click image for larger version)

There is also evidence that at various stages in the roundels' history, probably to hide signs of weathering and degradation, they were repainted with a terracotta- or a maroon-coloured coat of paint to look more terracotta-like (Figures 3 and 4).