Christian Dior is believed to have said: 'Without foundations there can be no fashion.' This was in reference to the crafted underwear that had been designed to sculpt a woman's figure to best show off his creations. But his comment could just as easily apply to the costume display mount. In the display of costume and dress the mount must be the foundation that allows for accurate historical interpretation as well as offer an appropriate level of support to an often fragile garment.

In response to Museum's objectives to exhibit costume in ever more striking and elegant arrangements, which reflect the modern zeitgeist for sharp, clean lines, there has been an increasing trend for the 'concealed' or 'invisible' mount. This style of support gives the garment fullness of figure without any part of the foundation mannequin or dress stand being
on show. 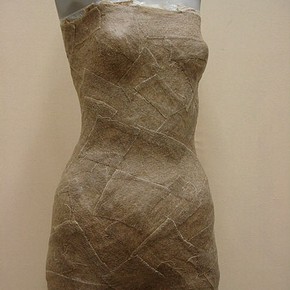 From a design point of view the invisible mount offers a tidy solution to a number of problems, such as choosing the figure best suited to compliment the garment and the overall look of an exhibition. But the practicalities of producing the ideal invisible support structure can be complex. At the V&A there are currently two techniques regularly employed as a means to achieve this kind of minimalist display using inert materials, such as buckram and Perspex® .

Buckram is a material traditionally used by milliners and can be purchased ready for use, however the V&A Textile Conservation Studio produces its own buckram to avoid unwanted additives used in the manufactured product. Short bandages of scoured linen textile are soaked in wheat starch paste and then overlapped in a succession of layers around a figure that has been padded to a suitable shape and size with polyester wadding (Figure 1). The wheat starch paste acts as an adhesive and stiffener. Once dry, the buckram can be cut from the figure mould as a hardened shell. The edges of the hollow form can then easily be cut away to match the edges of the garment, thereby forming the basic structure of the concealed mount.1

This technique has been employed to display two ballet tutus to be included in the V&A's new Theatre and Performance Galleries, due to open in the spring of 2009. The cut-away buckram mount was especially suited to the objects due to the fact that the tutu skirts were attached to tight knickers. It was therefore not possible to display them on a dressmaker's stand without extensive modification. It was essential that life-like figures with legs were used. The exceptionally small size of the tutus made it difficult to source a figure small enough to be used either as the support itself, or as a mould to produce directly a buckram form of the appropriate size. Therefore, the buckram cast of a larger figure was reduced to the correct shape and size by removing sections of the buckram shell and then rejoining the form with starched patches. In order to provide a smooth and unobtrusive interior for the mounts, cotton jersey was dyed to match the dominant colour of each tutu and was then secured by stitching it directly into the buckram. The lightness of the mounted tutus allows them to be easily suspended from the display case ceiling using monofilament line, thus removing the need for obtrusive stands (Figure 2). 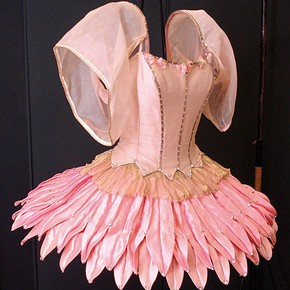 The V&A's 2007 winter exhibition, The Golden Age of Couture: Paris and London 1947-1957, featured a collection of early 1950s underwear. The design team had stipulated that the garments should appear to float within the display. This presented a challenge as two of the brassieres were constructed from a translucent nylon, a quality that the curators wanted to retain in the display as a significant feature of the period underwear. As a result, buckram could not be used to support the garments and a mount that was truly transparent was required. The solution was to use a shaped Perspex band to form the basic torso structure, although it could not be used to form well-fitting supports for the cup areas of the bras without vacuum forming the shapes. A paper pattern of the cups was taken from the original garments and then made up in a heavyweight Melinex® that could be stitched to holes drilled into the Perspex torso band. The sharp edges of the Melinex were softened with milliners crin, a nylon mesh that could be eased over the Melinex in a single piece. Traditionally, fabric-covered Rigilene® strips have been used to support garment straps but, due to the fact that the exhibition would be touring, a more rigid support was needed for travel. Lengths of brass were covered in fabric and screwed onto the Perspex thereby completing a robust and concealed form that the objects could travel upon (Figure 3). 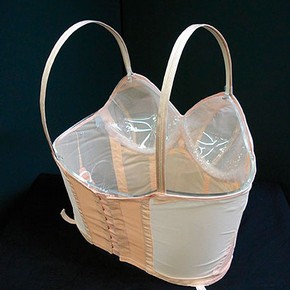 Whilst both of these methods can be successfully employed to prepare concealed mounts for the display of costume, each can be said to have their drawbacks. Whilst buckram is versatile, light, rigid and inexpensive, the production of the buckram support is a time-consuming process. The ideal Perspex mount would be vacuum formed in order to incorporate the complex curves so often a feature of fitted garments. However, to do this would necessitate the production of bespoke moulds that could withstand the heat of the vacuum forming process. At present this remains a lengthy and expensive option.

There are other materials that have been used to produce concealed mounts. The resin-impregnated cotton mesh X-lite® has been deemed unsuitable for long-term display of objects by the British Museum.2  However, it is thought that other thermoplastics currently used in medical or theatrical fields; such as Varaform™ and Rhinoflex™, warrant further investigation. The V&A plan to continue their research into materials and techniques used in the production of invisible mounts for costume.