Transforming the Ceramics galleries: an exercise in restraint

The V&A is undertaking a series of gallery developments as part of FuturePlan described on its website as a 'thrilling transformation of the 150-year-old Museum'. FuturePlan aims to present the collections in refurbished galleries with clearer and more engaging displays, providing better access and a greatly enhanced education programme. The Ceramics galleries, on the top floor of the Museum, have been included in this ambitious plan. 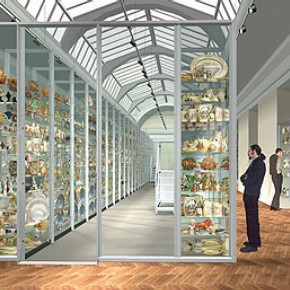 The aim is to revamp the galleries that have remained largely unchanged since 1909. The internationally acclaimed collections, encompassing the history of ceramics from the third millennium BC to the present day, will be redisplayed to inspire the enjoyment, understanding and study of ceramics. The galleries are being developed in two phases. The first phase opens in September 2009, with 3,000 objects displayed in seven rooms. An introductory display will introduce a 'world history' of ceramics, highlighting the masterpieces from the collection. Other rooms will focus on materials and techniques, architectural ceramics, changing displays of international contemporary ceramics and twentieth-century studio pottery. There will be a temporary exhibition space, a working studio and demonstration area. The second phase, due to open in 2010, will contrast with the first in appearance and intensity, with over twenty-six thousand objects in dense displays, evoking a 'behind-the-scenes'  experience with areas of 'visible storage' where curators can work (Figure 1). A new study centre alongside the galleries will offer researchers and students the opportunity to study and handle objects.

Ambitious plans demand detailed planning and careful management if they are to be delivered on time. The preparation of objects for the Ceramics galleries has had to run alongside several other major Museum projects with competing completion dates in 2009. To ensure that huge pressures are not placed on the small team of ceramics conservators, a dramatic rethink to our usual approach has been required. It was clear that limited resources would not allow for thousands of objects to be treated to the highest level, and so expectations had to be refocused to achieve realistic results. 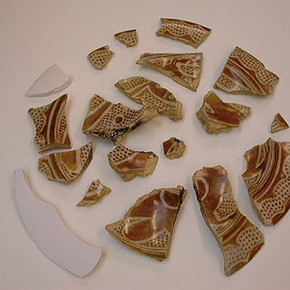 Recent gallery projects, such as the British Galleries and the Jameel Gallery of Islamic Art, have involved a detailed conservation assessment of each proposed object during the preliminary planning stage. The database compiled from the assessments provided not only an indication of the resources needed, but also invaluable detail about the current object's condition, technical and analytical requirements and environmental susceptibilities. However, gathering and processing the information in this way is time-consuming and for the Ceramics galleries project it was an unrealistic ideal. The decision was made to involve curators in checking the condition of the objects as they made their selection for the displays. Training sessions helped to guide the curators in recognising and understanding different types of damage, enabling them to make informed decisions about the need to involve a conservator. This saved valuable time for conservators by eliminating the majority of objects that were in acceptable displayable condition from further unnecessary assessment. A system was devised to flag up those objects that required further examination by conservators. 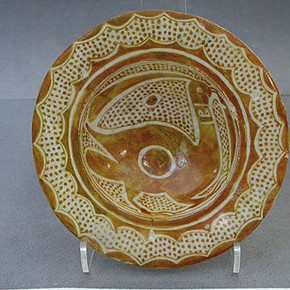 With limited resources, further time had to be saved during the treatment of the objects, and this was achieved by adopting an approach of minimal intervention. A hierarchy of treatment levels was agreed with curators. Priority was given to objects in an unstable condition. Their position within the displays was another important factor in deciding the level of treatment. Key objects in prominent positions merited a higher level of treatment than less visible objects. Parts of the object that could not be seen by the visitor, such as the rear or interior, were not treated at all. If a curator or conservator wished to intervene on aesthetic grounds, a good reason was needed. Improving or removing old repairs could only be justified when they were incorrect or misleading, but not if they were unsightly, yellowing or badly executed. It was not always obvious how to decide on the level of treatment and consultation between curators and conservators was often necessary. However, the rapidly diminishing time for the project had the effect of focussing the mind and making the decision-making process increasingly easy.

The closure of the galleries provided an ideal opportunity to select 120 iconic pieces for an international touring exhibition: 'World Ceramics: Masterpieces from the V&A', which traces the development of ceramics from ancient times to the present day. On their return, the objects will form a prominent part of the permanent display. These objects formed the exception to the ruthless decision-making process and were given full conservation where necessary.

The objects where exceptionally lengthy treatments could be justified included a mixture of interesting challenges. For example, a life-size Meissen porcelain sculpture of a goat (C.111-1932) modelled by J J Kändler will be placed on open display. As this had a number of repairs of unknown age and condition, it was felt that a partial treatment, concentrating on the main areas of structural weakness, should be undertaken to ensure stability. An Iraqi lustreware bowl (C.1309-1924), AD 900-1000, is another example of a candidate that warranted a 'full conservation' treatment. The bowl had been chosen for the touring exhibition and was not in a fit state to travel. Previously broken in approximately twenty pieces, the joins were in danger of giving way as the glue had deteriorated on ageing. The object was dismantled, cleaned and re-bonded. A large section of loss to the rim was reconstructed to provide further structural strength. It was decided to retouch the repetitive rim design to restore the aesthetic integrity of the object (Figures 2 and 3). Another exception to the approach of minimal intervention includes a large Egyptian vase (C.459-1927) for the Ancient Cultures display, which on close examination proved to be in a highly unstable state. The object had been restored before the Museum acquired it and the materials employed had contributed to the deterioration of the object. It was necessary for the conservator to remove old repairs, stabilise the object and partially reconstruct an area of the rim to provide structural support.

The new galleries will include a room devoted to large-scale architectural ceramics. Many of the tile panels have demanded a more interventive approach. A number of tiles required mounting on new backings. These included loose tiles to be displayed as a group and existing panels of tiles that needed to be rearranged. There were a number of panels mounted during the last century that had become unstable on their supports and required stabilising or, in some cases, dismantling and remounting. To help save conservation time, curators would try to find alternative tile panels as substitutes for those requiring potentially lengthy treatments.

From the conservator's perspective, adopting an approach of minimal intervention and making compromises has been a challenge. Having to perform basic treatments where so much more could have been done, was an exercise in self-restraint, as well as a battle of professional ideals. A very clear understanding of the expectations of the project was crucial to maintaining a balanced perspective. Viewed holistically, the galleries will be a vast improvement on what was there before in terms of the understanding and enjoyment of the displays.