Waking the Dead: scientific analysis of an Egyptian tunic

One of the textiles currently being conserved for the V&A's new Medieval and Renaissance galleries is a red woollen Egyptian tunic (291-1891) with tapestry-woven appliqué decoration. This tunic, which dates to around AD 600-799, is a rare survivor excavated from an Egyptian burial ground in the late nineteenth century. When the galleries open in the autumn of 2009 it will feature in the display 'Adorning the Dead 300-900'. The short length of the tunic, to about the knee, indicates that it belonged to a man. It is of particular interest because the word 'Allah' in Arabic script is woven into the tapestry decoration at the shoulder.

The Museum purchased the tunic from a dealer in 1891. The site where the tunic was found is unrecorded, but is believed to be Akhmim, in Upper Egypt. Excavation of burial grounds such as Akhmim revealed that from around the third century onwards, as Egypt became a Christian society, bodies were no longer mummified but were laid to rest dressed in clothes, then wrapped in shrouds. Unfortunately, many of these excavations were carried out in great haste and detailed information on the site was often not recorded.1  Due to such a lack of records the tunic has been dated on stylistic comparison with other textiles of known provenance, including some that have been radiocarbon dated.

There are various alterations to the construction of the tunic; some definitely made post-excavation, others still to be determined. In addition, the front of the tunic is a patchwork of repairs carried out over the years in a variety of fabrics and threads. The back of the tunic is structurally weak, with losses, and heavily stained from burial. The shape of a human figure can clearly be seen on both the outer and inner sides. Some of the stains on the inside are unusual as they form quite regular narrow stripes. There are examples of tunics with a 'lattice' pattern of staining caused by tight bandages wrapped around the body to keep the textiles in place; however the stripes on the V&A tunic are considerably smaller and seem most likely to have been caused by something between the body and the tunic, perhaps relating to the method of burial. 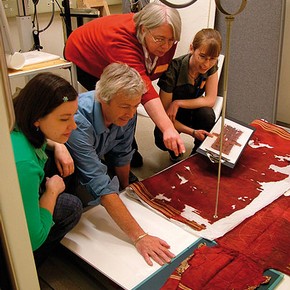 In order to carry out a comprehensive programme of scientific analysis of the tunic, the Conservation Department has formed a new collaborative partnership with Archaeological Sciences at the University of Bradford. At Bradford, natural and physical sciences are integrated in the study and understanding of the human past; the MSc in Scientific Methods in Archaeology particularly focuses on training students in scientific principles and practices as applied to archaeology. The tunic case study forms the basis of an MSc dissertation investigating the potential of several instrumental techniques to expand our understanding of an object's biography, while answering specific research questions.

The aim of the research is to identify and help to explain the unusual pattern of staining on the tunic, provide more specific information relating to the tunic's age and provenance and the chronology of alterations, and also inform the conservation decision-making process.

The analysis of the tunic was structured in two parts. First, the in-situ, non-destructive analysis of the tunic, which included X-radiography (Figure 1), and ultraviolet and infrared photography, was carried out at the V&A with the assistance of the Photographic Studio and Paintings Conservation Studio. Raman analysis was also trialed, however, a test study of several fibres revealed that they were too degraded to produce distinct spectra. Then, based on initial results from the in-situ analysis, small samples were taken from identified, and distinct, staining areas for minimally-destructive analysis in the Bradford laboratories by analytical scanning electron microscopy (SEM) and gas chromatography-mass spectrometry. Initial results suggest several distinct staining events. For example, X-radiography has highlighted a distinct 'tide-line' at the lower edge of the tunic, consistent with water staining and movement of debris to the edge of a wet region (Figure 2). SEM revealed extensive sodium chloride crystal deposition in this area (Figure 3). UV photography of the same area revealed a second staining pattern within the 'tide-line', also consistent with wetting but thought to have occurred prior to the larger stain. 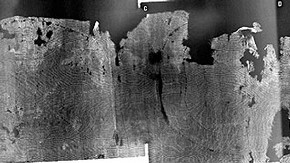 Figure 2. X-radiograph of the lower edge of the tunic (291-1891) with bright white (denser) 'tide-line' pattern, consistent with water staining and movement of debris to edge of wet region (Photography by Paul Robbins, mosaic by Sara Gillies) (click image for larger version)

Soil analysis was not feasible for identifying provenance; however, isotopic analysis was proposed as a potential alternative. It is a fairly new concept and there is only one study2  thus far that has looked at light isotopes in wool for provenance which will form a subsequent pilot study. It is based on the idea that the ratios of light isotopes (carbon, nitrogen and oxygen) in wool fibres vary between locations and could therefore be used as a signature for a place of origin. The isotopes are acquired from the sheep's diet, the vegetation being a reflection of the underlying geology. Samples from the main body of the tunic will be compared with the appliqué decoration as this may indicate whether or not the two parts come from the same location, and they will also be compared with modern and archaeological samples of known provenance. 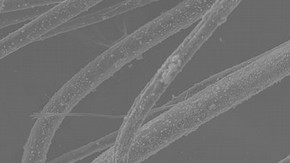 When the research has been completed the conservation treatment will begin in the autumn of 2008. The aim of the treatment is to stabilise the object for display, whilst preserving access to the reverse of the tunic for future study. Although the tunic is too fragile to be displayed on a life-like form, the Education Department is planning a replica tunic that visitors can try on. The tunic has already been featured on the V&A website and further information on the MSc project will be added which will hopefully inspire new interest in scientific research.

With thanks to Helen Persson, Marion Kite, Graham Martin, Ken Jackson, Paul Robbins, Rachel Turnbull and Nicola Costaras. Sara Gillies received funding from the University of Bradford and the Pasold Research Fund Inc to assist with the cost of the analytical work.

The conservation of the tunicis supported by The Mercers' Company.