What a Performance! The final curtain for the Theatre Museum 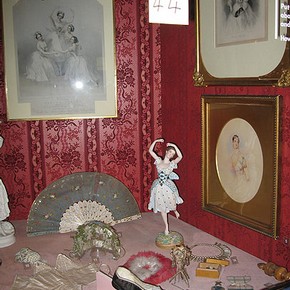 On the anniversary of Shakespeare's birthday, 23 April 1987, the Theatre Museum opened in London's Covent Garden and ran until 6 January 2007 when, following unsuccessful and protracted efforts to fund its refurbishment, the galleries were finally closed. Over the years the Theatre Museum maintained a schedule of enthusiastic exhibitions and displays together with educational programmes, live theatre events and a busy, frequently accessed archive housed primarily at Covent Garden and at Blythe House, West London.

Some of the objects on display had originally been made for the 'dramatic moment' and were not designed to last longer than the performances they had featured in. However, due to limited resources, many of the objects remained on display for longer than was originally intended and in display conditions and old cases unsuitable for long-term display resulting in many objects requiring surface cleaning and careful handling prior to their return to the Archive.

In March 2007, a project team was convened with a brief to empty the site by the end of the year. In August that deadline was revised to November accompanied by an increase in funding to allow for external packers and the retention of one member of the V&A's Packing and Transport Team to provide guidance and continuity of V&A standards and procedures.

Figure 2. Some of the many Theatre Museum costumes with complex and fragile surface decoration which required cleaning and packing. (Photography by Merryl Huxtable). (click image for larger version)

The instruction to empty the Theatre Museum came at a point when the V&A's Conservation resources were fully stretched dealing with major planned projects plus the work associated with the full and ongoing Public Programme. The only commitment Conservation could make was to provide a conservator from each discipline to carry out a one-day basic assessment of the objects in the Theatre Museum galleries with a view to any necessary work being carried out by contract staff.

For those objects which could clearly be handled, packed and stored using standard methods and materials routinely employed by both Museum technicians and Theatre Collections, a 'standard' treatment was allocated. Each conservator assessing the work also provided guidance notes on handling and suitable long term packing materials where it was known that the object was to remain wrapped in 'deep' store. Conservators also advised on the removal and packing of a few very large objects by specialist companies. These included a metal-based theatre lighting console which needed to be de-installed from a high level, two tiers of theatre box seating and three large glazed paintings.

The conservation assessors identified which objects required 'non-standard' treatment in the following categories: 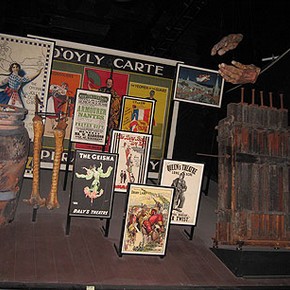 Figure 3. A Theatre Museum display before de-installation showing large, heavy and awkward objects such as a billboard poster, a wind machine and props including an Ali Baba pot, and ostrich legs (Photography by Merryl Huxtable) (click image for larger version)

This basic assessment indicated that 38% of the objects on display required a more individual, 'non-standard' treatment and the calculated hours provided the basis for applications for two contract conservators to be employed to help with this. Two five-week contracts were established at short notice with a textile and a paper conservator to carry out the more time consuming conservation work. Part of the paper conservator's brief was to develop a prototype design for bespoke Correx® storage boxes for set models.1  In addition, deframing and some essential remounting was carried out by two V&A paper conservators.

The conservators worked closely with the Packing and Transport Team and the Theatre Museum Archivist who was responsible for the overall schedule, managing the other external contracts, transport and the re-housing of the objects within the Archive. Four curatorial staff who routinely handled textile objects as part of their job, were given extra training in surface cleaning and handling. They packed most of the costumes and transferred many of the paper objects into primary housings.

The galleries, of just over one thousand square metres, contained approximately 2230 objects defined in the categories tabled below.

When communicating between two sites with conservators in one and the objects on display in another, the most useful management tool was a digital photographic record of nearly four hundred images showing the contents of each display case and the labels. The cases were sequentially numbered, with numbers appearing in each photograph relating to coded floor plans. The images had several uses e.g. copies were printed off and attached to display cases with instructions for the de-installers and were attached to the outside of packing cases to indicate the contents. The photographic record has been stored on VADAR (the Museum's digital asset repository) for future reference and is already being used in planning future displays of Theatre Collection objects.

By the end of November, all objects had been safely moved to other sites and the project concluded within budget. Whilst the Covent Garden building, display equipment and objects had presented many challenges to Conservation, these were balanced by the enthusiasm of the staff and a certain latent performance 'energy' in the objects. Thankfully this enthusiasm is currently being re-directed into the new Theatre and Performance Galleries at the V&A.  Doors open and the performance commences in spring 2009!