In late 2012, the Material and Techniques Furniture Galleries 133-135 will open. The galleries will be looking at the ways different techniques have been employed in furniture making and will include upholstery.

The diverse collection to be displayed includes an Indian chair (IS.57-1983), part of a group of furniture termed ‘Bombay Blackwood’, which was produced over a period of four decades from the mid-nineteenth century (Figure 1). This term refers to the place of origin and the timber used. The object was chosen to go in to the gallery under the section devoted to carving and is one of a set which includes a chair (IS.56 – 1983), and a sofa (IS.36 - 1975). 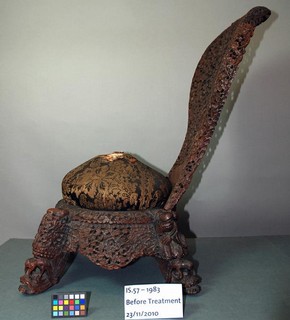 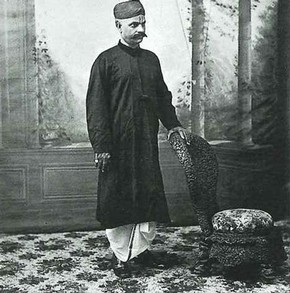 Figure 2 - Image of a 'Hindu gentleman with a prie-dieu chair' similar to the V&A’s Bombay Blackwood Chair, from the V&A Picture Library

Both the Indian chairs are highly-carved in low relief with a sprung seat which rests on top of the seat rails. The balloon backrest which is also densely-carved, is constructed with loose through tenons to the back rail - a style typically based on English furniture forms from this period. An original image of a ‘Hindu gentlemen with a prie–dieu chair’ similar to that in the V&A, was helpful in establishing the object’s upholstery profile (Figure 2). This image also indicated that the chair originally had a gallery surrounding the seat, a missing element from IS.57. It was fortunate that the companion chair (IS.56) had retained one section of the gallery, which enabled a mould to be taken and a resin replacement cast. 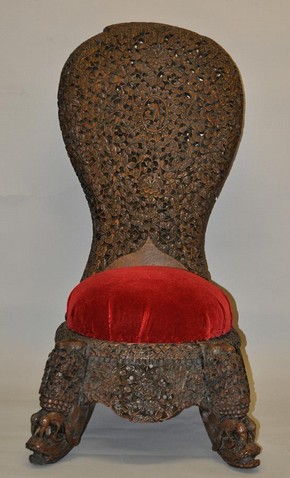 The seat was conserved due to the existing incorrect profile. The sole spring had expanded to its free height and in the process had stretched and torn the fabric as well as distorting the coconut fibre stuffing. Initially, all the material and fibre was detached from the wooden frame so that the spring was accessible from the top, the underside having a wooden base. To improve the profile the spring had to be vertically lashed back to its original height. The coconut fibre stuffing was extremely misshaped with an impression where the spring had been. Re-shaping the fibre made a dramatic change to the profile. Nylon net was place over the coconut fibre to hold it in place. The stuffing cover, damaged by tacks that had penetrated several layers of folded fabric, was conserved and stitched back in place.

As no firm decision was taken on whether the cover should be retained, it was decided to make one that could, if necessary, be removed and replaced without causing any damage to the conserved seat. Carbon fibre was chosen due to its high tensile strength and the thickness of each layer being not much more than a millimetre. Carbon fibre, which consists of 95% carbon filaments and can make a smooth, flat cloth, can be made rigid by casting with an epoxy resin.

Before experimenting with the twill weave, it was thought that a mould would have to be made from the seat and a casting taken, however, due to the property of the twill, it was possible to make a cast directly from the seat, which helped to achieve the correct shape. This process was speeded up to decrease the time the carbon fibre was on the seat.

Red velvet mohair was selected for the top cover and to secure it, a black fabric was attached to the bottom edge with Beva® film, leaving an area free of adhesive so the cover could be stitched on (Figure 3).