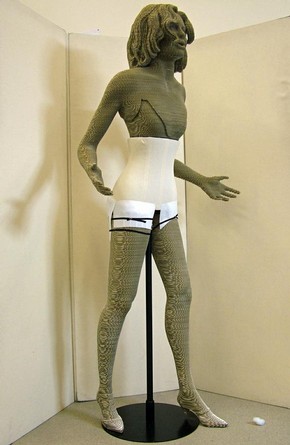 Autumn 2012 will see the opening of Hollywood Costume: The Good the Bad and the Beautiful. It will feature over 100 iconic Hollywood costumes and examine the role of the costume designer as an integral collaborator to creating character in film. As the exhibition will focus solely on costume it was decided early on in the design process that the display mannequins needed to convey the life and character that inhabited each costume without a ‘Madame Tussauds’ style celebrity likeness dominating the exhibition or its garments. Senior curator, Professor Deborah Landis, had long been of the opinion that the importance of costume design to the development of iconic Hollywood characters represented in the exhibition could not be communicated by displaying the costumes on conventional museum dress stands or shop front mannequins. There was a need for more verve in the mannequin dress supports than ever before.

In 2010 the Rapid Form Department at the Royal College of Art (RCA) produced two figures for the Science Museum’s ‘Who Am I?’ exhibition. The figures were of an average sized man and woman and had been made from laser cut layers of fluted corrugated card produced from body-scanned data of the subjects. On display the contoured layers of corrugated card gave a warm and organic look to the figures with the stepped edges creating a textured finish that managed to capture a surprising amount of detail. The sophisticated technique seduced curators and designers alike in both its subtlety and clarity. The V&A Textile Conservation team began to collaborate with the RCA to produce a prototype figure of Renee Zellweger as ‘Roxie Hart’ in the movie ‘Chicago’ to ascertain whether their technique could be adapted to produce museum standard display figures for our exhibition of Hollywood costume. This ambitious project presented many challenges for both the RCA Rapid Form team and the V&A Textile Conservation studio. 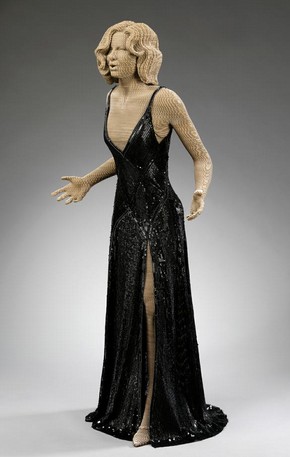 As opposed to the body scanned data used to produce the Science Museum’s figures, three-dimensional computer sculpts of Ms Zellweger’s character would have to be generated from film stills. The computer generated (CG) sculpted avatars would be made to convey the character likeness of Roxie Hart’s face and body. The aim was to pose and size the avatar likeness to produce the data for the resulting laser cut figure. This complex initial stage of production was largely the domain of the RCA working with CG artists. The V&A curatorial and conservation team provided direction for capturing the facial expression and body stance.

The first step for the V&A Conservation studio was to ascertain whether inert materials could be used in the production of the forms. The Science Museum’s figures had been produced from a traditional corrugated card. In order to move forward with the project it was essential to determine whether an acid free fluted board could be used instead since the costume would be in close proximity to the figures. The acid free board was found to be much stronger than the conventional card resulting in a more robust figure when stacked in layers, however acid free fluted board could not be sourced in the classic cardboard colour. This was of concern to the designers and curators as the acid free white and grey board produced a cooler statuesque appearance slightly reminiscent of a corpse.

Each individual layer of the card had to be adhered together therefore experimentation into appropriate conservation grade adhesives also had to be carried out. A solution of Paraloid B72 in Acetone was found to be most suitable for fixing the cut cardboard layers. A side effect of the laser cutting technique was that a carbon residue was produced along the cut edge of the cardboard. It was discovered that spraying the Paraloid solution onto the assembled layers of cardboard would seal the edges and protect the costume from any potential contact with the residue. Since spraying the adhesive was a necessary step in production there was an opportunity to look at also spraying the figures with a fine layer of acrylic paint in order to bring the acid free board back to a warmer traditional cardboard tone.

Having established that the body could be produced from conservation grade materials the next step was to decipher how the figure would work practically as a mannequin form. Where the Science Museum’s figures had been fully formed solid sculptures the Hollywood mannequins would need to be disassembled to allow for dressing. As the bulk of the figure would be unseen and covered with support padding beneath the costume it was decided to build the figure around a Proportion Ltd dress mannequin. For the prototype a toile of the black sequined dress worn by Ms Zellweger in ‘Chicago’ was fabricated in order to trial the fitting process and mannequin assembly.

The most challenging stage of the contoured mannequin production proved to be scaling the figures to fit the costume. A basic Proportion torso was identified that suited the dress measurements and also allowed room for the support padding. This torso was then cut away to the costume edge lines and Ms Zellweger’s computer sculpted head, limbs and décolletage  scaled up to exactly marry up with the cut edges of the mannequin. The RCA team had only the film still references and the costume measurements in toile form to create the exacting proportions of the body. The measurements provided limited information on the body shape needed to inhabit the garments and posing the figures significantly altered the vital statistics of the body. This added a level of complexity that had been underestimated and was extremely difficult to manage even when the mannequin was the correct size in a neutral pose.

The collaborative team managed to over come all material and production obstacles in order that Ms Zellweger’s character was successfully built. Both the RCA and V&A felt they had produced a display figure that was truly innovative that also managed to subtly capture the life and character of Roxie Hart. Unfortunately the sheer ambition and complexity of the project meant that it was impossible to produce the volume of contoured mannequins needed for the exhibition. The production process could not be made reliable or fast enough to commit to using these mannequins throughout the Hollywood display. With heavy hearts the decision was taken that movement and character in the costume supports would have to be created by more conventional means.

Although the rapid form mannequins were not a viable option for the Hollywood show both the RCA Rapid Form Department and V&A Textile Conservation Studio are keen to invest the time needed to develop the concept and iron out imperfections in the production process. We hope to have an opportunity to use the forms in a more modestly sized costume exhibition of the future.