The exhibition Object of Devotion: Medieval English Alabaster Sculpture from the Victoria & Albert Museum, which toured the United States from December 2010 to July 2012, featured sixty alabasters loaned by the Museum, representing the most extensive collection of these sculptures on international tour. The V&A Technical Services design and outsourcing workshops provided all the mounts and fixing solutions required for the exhibition, making over 400 separate pieces of bespoke steel brackets, ledges and clips.

In medieval times there was a thriving export trade in English alabasters and the majority have survived only as individual panels, having long since been separated from their intended groups and decorative framework surrounds. Five of these panels form a near complete set depicting chronological episodes from Christ’s Passion (A.171-1946, A152-1946, A172-1946, A153-1946, A154-1946) and, originally, would have been contained within a decorative triptych framework that stood on an altar (Figure 1). The Passion Altarpiece found its home in Palma de Mallorca, but in the 1920s, the group became separated in Dutch auctions. The panels were later reunited to become part of the Hildburgh collection and his bequest to the V&A.

The curatorial request to display this set of panels in a mount that resembled the basic form of a medieval altarpiece afforded an excellent opportunity for the mounts team to demonstrate their design and woodworking skills and the versatility of their mounts production. Fortunately, the V&A has the Swansea Altarpiece (A.89:1-15-1919), a splendid rare survival of an original wooden painted and gilded hinged surround (Figure 2). The new mount was based on the basic dimensions and design features of the Swansea framework. A series of detailed technical drawings were produced incorporating images of the stones reproduced to scale. Care was taken to ensure the new timber achieved similar proportions to the Swansea version, especially the height of the base planking and the distinctive triangular uprights.

This new altarpiece was never intended to be a replica, so medieval carving, surface painting and gilding were not reproduced. Our altarpiece had to step in the direction of its fifteenth-century counterpart while retaining entirely the look and function of a contemporary unobtrusive display solution. The colour for the new woodwork was crucial. Initially it was intended to paint it an overall dark oak colour matching the tone of the Swansea version, but a satin black proved the best solution. Although clearly not historically authentic, it was a striking contrast to the curiously waxy, almost tea-stained look of old alabaster stone.

The hinged wings of medieval triptych altarpieces could be folded shut like a cupboard, enclosing the stones from view, but here our new mount had to be different. The lengths of its wings are shorter because these particular Passion of Christ panels are lacking an additional pair of saints that may have stood sentinel at the far left and right as in the Swansea example. A mount that featured two empty compartments just to maintain the original length of its wings would have been too distracting. 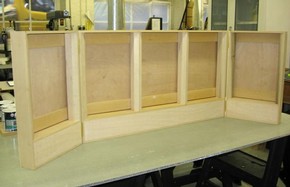 A pivotal decision about the transportation of the stones needed to be made at the design stage, as this would ultimately affect the way in which they were mounted within the framework and the provision for access and their removal. The ideal solution was for the stones to be transported within the framework so that the display mount would also act as a means of transport protection, simplifying the crate design. Moreover, this would alleviate the need for the removal of the stones, making the installation process at each venue as simple as possible, while critically minimising any potential risk to the stones during this process.

The framework had to be structurally stable to withstand the stresses of transportation, firmly supporting the stones without torsion or movement. Jelutong timber was selected for the frame construction, primarily for its conservation qualities but also because its close uniformed grain would not distract the eye. The jointing methods used for the frame were a combination of stopped housings and biscuit joints providing a rigid box frame assembly (Figure 3). Together with the plywood back panels, the triangular mullion sections became key structural elements. 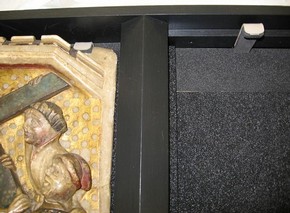 Each stone sits in its respective Plastazote® lined compartment, providing cushioning for transportation and display (Figure 4). The stones are anchored at the top with fixed custom-made steel retaining clips, while the lower clips function as the locking pins. These are neatly accessed and released from the lower back compartments, minimising the seen portion of the clips and facilitating the easy removal of the stones for condition checks and storage.

It was very satisfying to see these five panels, which were never intended to have separate identities, reunited and enclosed in a wooden casing for the first time in centuries. Though not a copy of what stood on a medieval altar, this mount reflects a carefully considered and effective display solution based on its original appearance. It seems both remarkable and appropriate that after nearly 600 years this group should still be travelling overseas, defiantly together, intact and now, at last, properly set within an altarpiece again.