REMAI: the European Network of Museums of Islamic Art 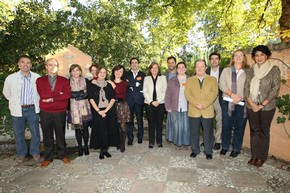 Funded by the EU Culture Programme, REMAI (Red Europea de Museos de Arte Islámica, in Spanish) is a European network of museums specialised in conserving cultural heritage of Islamic origin, particularly that of Islamic Spain. The project so far involves three partners: the Victoria and Albert Museum through its Sculpture Conservation Studio and the Middle Eastern Section, the Patronato de la Alhambra y del Generalife (PAG), and the Musée du Louvre. This network has been conceived to optimise the understanding of Hispano-Islamic collections through the multidisciplinary exchange of knowledge and expertise from conservation, curatorial and scientific perspectives focusing particularly on plasterwork, lustre and blue ceramics, and nineteenth-century photographs of the Alhambra. 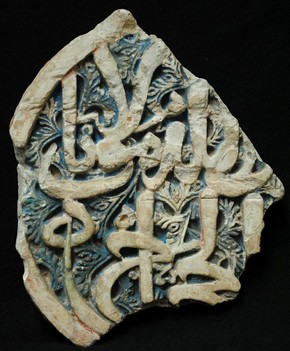 REMAI is the result of the natural progression of the collaboration within the V&A between the Sculpture Conservation Studio and the Middle Eastern Section, focusing on works from Islamic Spain. This collaboration started back in 2004, when, as part of V&A FuturePlan, the new Architecture Gallery was developed. To exemplify Islamic architectural elements in the display, four plasterwork panels said to be from the Alhambra Palace, were chosen. It was during the conservation work and in collaboration with the curator Mariam Rosser-Owen that we realised how little we knew about those objects and how much work was necessary in order to understand their materials and techniques which have long vanished from Western Europe. It was the starting point of a journey that made us focus on Hispano-Islamic art, particularly that from the Alhambra Palace, which has been reflected in several publications. (1) (2) (3) (4)

In 2008, a formal agreement of collaboration was signed between the V&A and the PAG. Due to the initiative of the PAG, a successful grant application to the EU Cultural Programme in 2010 marked the birth of REMAI and a two-year collaboration period between the V&A , the PAG, and a new third party, the Département des arts de l’Islam at the Musée du Louvre (Figure 1). The mobility of individuals between the different institutions has been of paramount importance to REMAI, improving communication and allowing learning from each other’s expertise and collections. 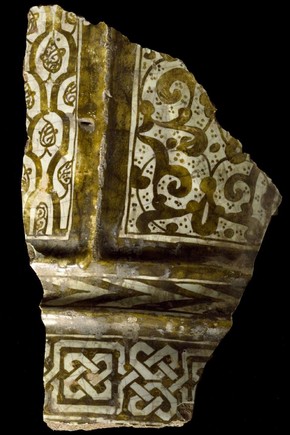 One of the first steps was to agree on a total of thirty objects to be studied in detail. Each institution selected five pieces of plasterwork and five pieces of ceramics for the research. Shortly after, samples were taken for analysis by two different main research centres, the ceramics by the Centre de Recherche et de Restauration des Musées de France in Paris and the plasterwork by the University of Jaén. The V&A Science Section also has had an important role supporting this research with specific analysis.

The V&A has a large collection of over a hundred fragments of Hispano-Islamic plasterwork from the Alhambra Palace; some which could date from the fourteenth century or even earlier, while others are 19th century copies. The relevance of this collection is that some panels are probably from areas of the Alhambra Palace destroyed in the past (Figure 2). For the study of these plasters, samples were taken from the gypsum plaster mixes and from the paint layer structure in order to understand fully the use of the materials and techniques and to group the panels chronologically.

Within the collection of Hispano-Islamic ceramics at the V&A, which includes the iconic Malaga Bowl (486-1864), is a group of ceramic shards (Figure 3) which, although originating from Islamic Spain, were found at the archaeological site of Fustat, Old Cairo, Egypt. For the study of these ceramic fragments, samples were taken from their clay bodies, glazes and pigments in order to help answer questions about their manufacturing provenance, the type of objects they were originally part of and, most importantly, the relevance of the export of these wares to North Africa and the Eastern Mediterranean. The scientific interpretation of the analysis, together with the conservation and curatorial research, will permit better understanding of these collections and will allow us to tailor the conservation treatment specifically to their needs. 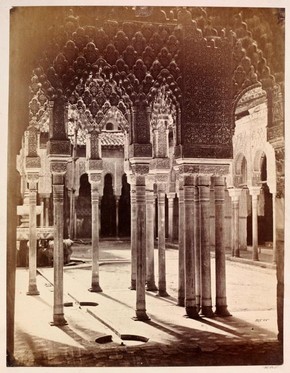 An over-arching theme for REMAI is the rediscovery of the Alhambra by European travellers in the eighteenth and nineteenth century, which made it one of the most photographed buildings in the world. The V&A archives contain a large collection of nineteenth-century photographs of the Alhambra (Figure 4). Experts from the PAG have helped to identify and interpret the importance of this collection as another tool to reconstruct the story of the restoration of the Alhambra Palace.

REMAI comes to its completion in April 2012, after two years of work. The outcomes will be diverse but will be of interest to both the international academic community and the wider public. A new database, focused on scholarly studies, will amalgamate all the results from the historical research, conservation reports and scientific analysis. A new web portal will be designed to create a virtual exhibition, where the objects and the conclusions of the research will be made available to the general public with high resolution photography, short films showing the different stages of the research and other contents. The icing on the cake will be an international seminar taking place in the Alhambra in April 2012. This event will be a unique opportunity for conservators, curators and scientists with an interest in Hispano-Islamic Art to gather and discuss the results of REMAI, together with any new discoveries in the field. From the point of view of Islamic plasterwork, this seminar will offer an unprecedented opportunity for professionals working in this field in North Africa and the Middle East to get together with their European counterparts, share their work and benefit from their respective expertise.

The legacy of REMAI will be the establishment of protocols to be followed during future conservation work, historical research, and scientific analysis of Hispano-Islamic plasterwork and ceramics. We hope that this initial two-year period will just be the beginning of REMAI and that in the future the work will progress with new institutions joining the network.