An Investigation into the History of a Damascened Iron Games Table

This damascened tripod games table (now displayed in the new Furniture Galleries 133-135), was first documented in the sale of the collection of Debruge-Duménil1 in 1847 (Figure 1). It was acquired by the Museum in the late nineteenth century, having passed through the hands of other eminent collectors such as Prince Soltykhoff. It was then dated 1550-1600, and thought to be a rare example of Milanese armourers’ work applied to furniture. Early on during treatment in 2011, it became evident that the object had, at the very least, undergone considerable change. It was therefore important to try and discover how and when the table had changed. This article describes part of this process of investigation. Selected elements have been chosen to show how close observation, curatorial expertise and scientific analysis can combine to form a picture of the history of an object. The investigation is ongoing and it is hoped eventually to publish the findings in a lengthier article. 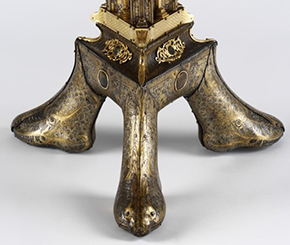 Figure 1. The table after conservation. © Victoria and Albert Museum, London 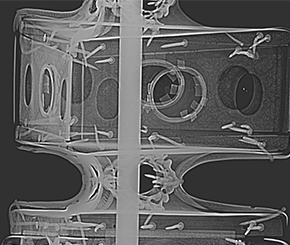 Figure 2. X –ray of the tripod stem, showing iron plaques attached with nails to the wooden core, and a substantial iron bolt running through the centre, Photography by Paul Robins © Victoria and Albert Museum, London

X-radiography of the table confirmed that it was constructed of damascened iron plates attached by nails to a wooden core, with a substantial iron rod passing through the centre of the tripod stem to hold the object together (Figure 2). Additional decorative elements are also secured to the surface using nails and various adhesives. The x-ray did not give any evidence of the history of the table but was helpful when it was decided to remove some elements from the object in the hope that they would provide clues, and also to look at the wooden core of the object.

The wood of the table top appears to be a softwood (Figure 3), and by its smoothness and fresh appearance, it seemed to furniture conservators and curators to be probably less than 200 years old. Every hole in the surface could be matched to a corresponding nail holding the plaques in place. By contrast, the wood of the stem looks like a hardwood (possibly walnut) (Figure 4). The stem shows signs of age (old woodworm holes) and also of modification, where a circular section had been carved out and the upper portion roughly hacked back, as well as many redundant nail holes. With some plaques removed from the table top, it was noticed that a blue-tinted composition seemed to have been used as a filler around some of the lapis lazuli plaques (Figure 3). A sample of this was subjected to Raman spectroscopy, which showed a spectrum denoting that the blue pigment was likely to be Prussian Blue. At present, the earliest known use of this pigment is at the beginning of the eighteenth century2, more than 100 years later than the accepted attribution date of the table. 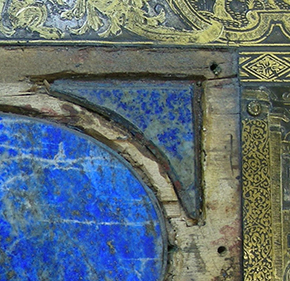 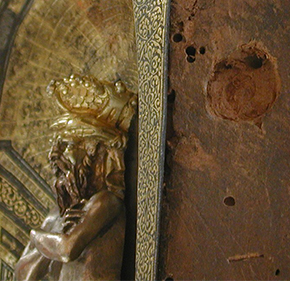 Examination of the reverse of the iron plaques removed from the table top reveals little, apart from locating numbers corresponding to numbers inked onto the wooden table top. These could not be used to assess the history of the object. Furthermore, although ED-XRF is useful in confirming the identification of the metals used, the damascening technique was developed before the supposed date for the table and continues to this day, employing the same materials and methods, so neither analysis of the metals nor microscopic examination of the technique can be used to date the plaques. Therefore, assessment of the damascened iron plaques focussed on the quality of the work, the decorative designs, and the forms of the plaques. 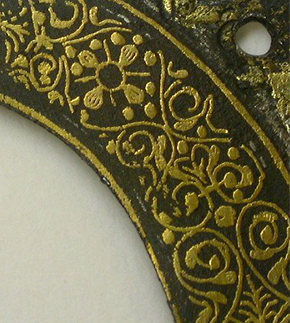 Figure 5. Detail of plaque showing that it has been cut down , Photography by Sophia Wills  © Victoria and Albert Museum, London

Close observation of the table top revealed that the smaller plaques with architectural scenes do not relate well to the large central plaque, which was composed of areas of ‘moresque’ decoration including the chess board, interspersed with scenes of landscapes and classical motifs. The feet, with their unusual depiction of a toothed mythical beast, were completely unlike the central or architectural plaques (Figure 1). Curators from the V&A and also Professor Silvio Leydi3, an expert in Milanese armourers work, believe that most of the plaques are convincing as sixteenth century work, based on their quality and decoration. However, an important observation was that, all over the object, but most noticeably on the table top, many plaques have been cut down or altered in some way and extra nail holes could be seen on most of the plaques (Figures 3 and 5). All these factors suggest alteration to the table and, possibly, that parts from more than one object have been combined.

In order to remove plaques and other decorative elements, it was necessary to remove many of the gilt copper alloy nails that are used all over the object to secure the metal elements to the wooden substrate. There are several different types of nail and screw but the most numerous group, which is present all over the table, has a broadly similar form, with a beaded head and tapering shank. Twenty of these nails, taken from all over the table, were examined under microscopy. It was found that they were manufactured in two parts (shank and head). There was no evidence of longitudinal striations on any of the shanks examined, but rather evidence of filing and hammer marks. These characteristics might suggest that the nail shanks were not drawn through a steel drawer plate, but rather cast, and then hammered and filed to a point. There is no sign of solder joining the beaded heads to the shank, so it may be that they were hammered together. This evidence, which hints at a non-industrial production method, points to a date before 1800 for these nails, but further examination is necessary to try and ascertain how the beaded heads were produced and exactly how the two parts were joined together.

The evidence presented above represents only a small proportion of the evidence found during the investigation. There has been no single discovery which instantly elucidates the object’s history. Rather, it is small, sometimes contradictory clues which help form a picture. In some instances, scientific analysis has been helpful in providing pointers; for example the Prussian blue pigment found around the lapis lazuli plaques which cannot be older than around 1710. In other cases, it is detailed observation, for example, the cutting down of plaques on the table top, pointing towards an alteration and also possibly to a combination of plaques from different objects. Although we have not drawn together all of the strands of evidence, we can now be confident that this object has been altered quite radically. Many queries still remain: for example; was the original top smaller, with the borders with lapis plaques being added later? How much of the alterations could be described as repairs? We hope that by the end of the investigation, at least some of these questions may be answered and that further review of the evidence does not throw up too many more.

I would like to thank V&A curatorial and scientist colleagues, Professor Silvio Leydi and John Griffiths for their help with this project.