In 2010, the V&A acquired a very important hanging scroll, which originally formed part of a set of religious images used in the Buddhist 'water and land' ritual. The scroll depicts a Tiger Taming Arhat (FE. 2-2010), or one who has gained insight into the true nature of existence and has achieved nirvana (spiritual enlightenment). The scroll painting is in good condition with vibrant colours. The silk support shows only minimal water damage and some old tears that had been poorly retouched. The Imperial mounting style, indigo blue and yellow phoenix silk (ling piao), had been truncated at the top and bottom, presumably to fit into a Western picture frame rather than maintaining its Eastern scroll format. The scroll top silk cover had been previously replaced with an unsympathetic patterned silk and the lower edge was pinned to the roller, causing rust stains to the yellow mounting silk when rolled. The inscription to the lower right corner suggests that the Manchu prince, Boggodo, whose grandfather was the founder of the Qing Dynasty, had commissioned it (Figure 1).

Due to the lack of staff with the necessary expertise to carry out treatment on this type of object within the V&A, it was arranged for the scroll to be sent to the Hirayama Studio at The British Museum to be worked on by Mrs Qiu Jin Xian (Expert Conservator of Chinese Paintings) and Valentina Marabini (Conservator of Chinese Paintings). In addition, Hongxing Zhang (Senior Curator, China) and Susan Catcher (Senior Paper Conservator), both from the V&A, also formed part of the decision-making team. In general, it is normal practice to remove all old scroll mountings and to replace them with new silk and linings that enhance the painting. This could take place several times in the life of a scroll painting, so it was unusual to find an original mounting in such good condition. Consequently, because of the importance of this scroll, it was decided to implement a partial conservation strategy in order to keep the integrity of the design and structure. The existing indigo silk would be extended to the usual 60/40 ratios: the tian or heaven having 60% of the depth and the di tou or earth being 40%. The silk cover and the roller ends would also be replaced. 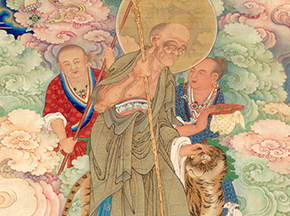 Figure 1. Tiger Taming Arhat hanging scroll before the extension of the tian and di tou © Victoria and Albert Museum, London 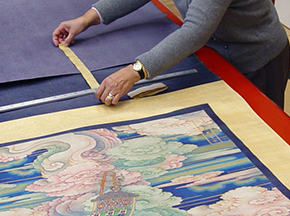 The damaged top and bottom areas were removed and a new patterned silk selected which was lined and then dyed to match the original. In order to achieve this, several organic Chinese pigments were mixed together and many samples created to produce the correct shade. The old gyingyen (the decorative elements) on the tian were peeled off temporarily and would be reused (Figure 2). All the old backings (which can be up to three layers on a Chinese scroll) were removed by humidification. The first lining was left intact as removal of this would leave the delicate silk and under painting vulnerable to further damage. Also at this stage, any torn edges were repaired using wheat starch paste and paper reinforcements applied to split areas. The new insertions of tian and di tou were attached, prior to the new linings, to the verso. Areas of lifting (from before the treatment) were consolidated with a methyl cellulose (3%) syringe application through recto and verso and then left to air dry on a felt. The scroll was then re-humidified and the re-attachment of gyingyen was carried out. The new structure, including a new backing paper, was put onto a wooden Chinese drying board to stretch out and left for a few weeks to dry. Retouching took place whilst the scroll was on the drying board (Figure 3) and new wooden fittings of the top and bottom stave were added to complete the structure. 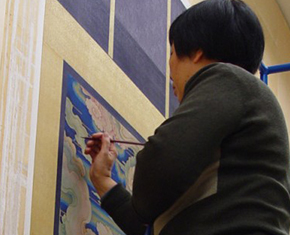 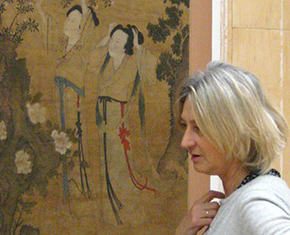 After the conservation of the Tiger Taming Arhat hanging scroll it became obvious that a paper conservator from the V&A needed training in basic Chinese scroll mounting: this would 'fill a gap' in the specialist skills required by the Paper, Books and Paintings Conservation studio. Frequent rotations within the Tsui Gallery, where the hanging scroll is now exhibited, and the forthcoming ‘Chinese Paintings’ exhibition, due to open in autumn 2013, would require some in-house conservation work. Joanna Kosek, (Head of Pictorial Art Conservation at The British Museum), was approached with the idea that V&A paper conservator, Susan Catcher, would shadow both Mrs Qiu Jin Xian and Valentina Marabini to learn the basics of scroll mounting.

Nothing prepares you for the intensity of this type of education or the many areas of conservation and culture which would be covered in such concentrated professional training: an apprenticeship in a recognized studio of Eastern conservation normally takes around ten years. Firstly, there has to be an understanding about the Chinese language, culture and basic materials. Secondly, there has to be knowledge of how to use and maintain equipment, such as the hoof knife, traditionally used for trimming the scroll edges, the various brushes including a goat hair pasting brush called a paibi and a coir wuzhou used to smooth the lining paper in place and to apply thicker paste. In this particular case, the initial teaching consisted of creating the new laminate xuan paper linings and how to remove the old ones. Xuan paper is a soft, white, flexible, Chinese handmade paper made from the inner bark (Pi), of the than or blue sandalwood tree, pteroceltis tatarinowii maxim. It also extended to the dyeing and lining of silk and methods of re-attaching the various elements into the scroll format. The training is ongoing and is carried out both in the Hirayama Studio and at the V&A, which has been extremely valuable and useful for both studios, since the transfer of information and ideas generated has enabled a dialogue between colleagues to develop (Figure 4). The most recent outcome of this training has been the work necessary to complete the Tsui Gallery rotation.

I would like to thank Joanna Kosek, Mrs Qiu Jin Xian and Valentina Marabini of the Hirayama Studio at The British Museum.