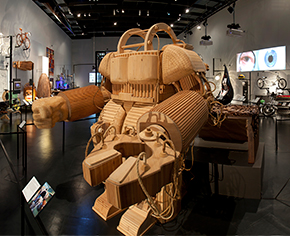 Continual, competitive developments provide endless options for improving working processes. The accessibility of digital assets has effectively enhanced the efficiency of the way we work. Two recent examples of how we are embracing new technologies are discussed in the article below. The demanding national and international touring schedule of the V&A requires the collating of information from a cross-section of departments within the Museum. Such information is generated through a large number of hard copy documents comprising:

A hard copy format, particularly when documents are legally binding and require sign-off at each venue (i.e. condition reports with added annotations) means, should anything get mislaid, there is no up-to-date back-up.

To reduce this risk, the Conservation Department trialled the use of digitally-processed condition reports via a touchscreen device, using an iPad along with PDF Expert application during the deinstallation of ‘Power of Making’  (V&A, 6 September 2011–2 January 2012) (Figure 1). The facility to import images and annotate directly onto the iPad proved intuitive and time-efficient. By saving the usual Word-formatted condition reports as PDFs, and uploading them via iTunes to an iPad, we were able to annotate the images directly on the iPad as necessary. However, annotations were mostly redundant because of the ability to zoom into the image and detect areas of concern which would have been indiscernible on a hard copy image. The advantage of progressing to image-only conditon reports is hugely beneficial when considering the number of non-English-speaking institutions to which V&A exhbitions travel.

The iPad also allowed us to upload all images taken during installation to the photo library, along with images relating to how the object was packed, and place them into individual object folders. This process provided the versatility to access all detailed images during condition checking and subsequent packing. To give an example of how practical this was: for Michael Rea's ‘Prosthetic suit for Stephen Hawking’, it was necessary to produce 150 images to guarantee all areas of this multi-part three-dimensional suit were fully recorded for compliance with Government Indemnity requirements . To have all these images in hard copy format would have required excessive amounts of paper and a considerable amount of time in preparing the images for print. Saving these images directly onto the iPad proved adequate for purpose and saved time and resources.

Following on from ‘Power of Making’, (A V&A/Crafts Council exhibition) the iPad was then used to document ‘Britain Creates 2012: Fashion + Art Collusion’, (V&A, 6-29 July 2012), a non-touring display consisting of nine pieces, each produced as a collaboration between a leading British fashion designer and visual artist. High resolution images of the objects were taken during installation using a digital camera (the inbuilt camera of the iPad 2 did not allow for such quality) and uploaded to the iPad library ready for deinstallation. These provided enough detail to confidently condition assess each object before dispersal.

However, in order to maintain a consistency with established and developing Museum systems, we realised a standard software application would not allow for the cross-platform information sharing or generating required to ensure access to all key areas of information. We are currently in discussion with the Documentation and Collections Management Department as to how this proposal could be put in place, while also drawing the necessary object information from the Collections Management System (CMS) to ensure access to all relevant information and avoid the duplication of tasks.

The V&A exhibition ‘Decode:Digital Design Sensations’, in partnership with SAP (8 December 2009–11 April 2010) continued its London success with a celebrated international tour to CAFA in Beijing, Garage CCC in Moscow and finally the Design Museum Holon, where it closed in March 2012. In total 202,770 visitors attended and interacted with the objects. 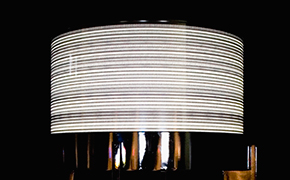 The very nature of kinetic, interactive objects, the way they are designed to be experienced and enjoyed, and the fact that they move, presents potential issues for care and maintenance. All the works included in ‘Decode’ were loaned-in objects, on the whole unique and handmade and mostly constructed for use by smaller audiences than those at the V&A. Materials used to produce the works had differing life spans which were reduced, sometimes to failure, depending on the number and subtlety of the participants.

‘Digital Zoetrope’ is based on a traditional zoetrope which displays moving images through the use of motion and light. It consists of a lacquered wooden structure with a revolving drum housing a lambda photographic print (Figure 2). When still, the print appears as an abstract image; in motion, the shapes unite to produce words describing a series of narratives.

During installation at Garage CCC in Moscow, the drum was found to have stopped rotating. Touring an object often means distancing it from its maker, who, in the case of some objects, may be the only person with the knowledge for certain repairs. Generally, it is possible to carry out minor repairs swiftly via clear communication but occasionally an object requires its maker’s understanding and intervention. The designers were contacted and the situation explained, from which they were able to identify the issue: the internal belt had snapped. Following clear advice new parts were sourced and, for safe measure, additional spares. Fortunately the venue had a good wireless connection so the designers could be contacted at an agreed time on a laptop using Skype™ video call. The laptop was moved around the work so the designer could see exactly what was happening, clearly instruct what our hands needed to do and eventually, together mend the object. This proved a very simple, yet effective way to work with the designers from a distance. The work was mended to their specification and satisfaction, they were able to see the work functioning and the venue had a fully-working object in time for the exhibition opening.

We would like to thank Eva Rucki, Conny Freyer and Sebastien Noel of Troika studio.