Research on Paintings – A New Display 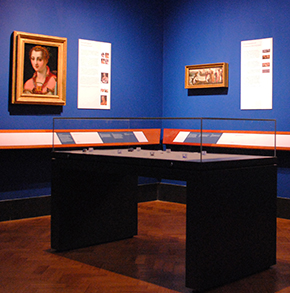 A new display, ‘Research on Paintings’, in Room 90, the Julie and Robert Breckman Prints and Drawings Gallery (December 2012 - September 2013) showcased collaborative work between paintings conservators and curators undertaking research as part of the revision of the Foreign Paintings Catalogue. Incorporating a number of paintings that had been recently examined and treated by conservation staff and interns, the display showed how technical information about the physical make up of paintings can complement art historical research.

A painting by Frans Snyder, ‘Still Life with Deer Carcass’, treated by paintings conservation interns Gabriella Macaro and Carolina Gray, was cleaned and restored for the exhibition. The artist’s signature was discovered beneath layers of opaque varnish confirming that the painting was indeed an autograph work by the Flemish animal painter (4418-1857). Gabriella Macaro was also responsible for the treatment of the ‘Female Figure’ now attributed to Francesco Morandini (Dyce Bequest, Dyce.1). Gabriella painstakingly treated the painting which had been infested with wood-boring insects, leading to some gory discoveries under the microscope (Figure 1)!

Another painting which was cleaned for the exhibition is the small ‘Virgin and Child’, (769:1-1865) attributed to a follower of The Master of Flémalle (Figure 2). The painting had been x-rayed by Paul Robins at the request of intern Marilyne Beauregard and significant overpainting and alteration to the composition could be identified. Removal of the varnish and overpainting (undertaken by the author) revealed the presence of three adoring angels playing musical instruments, as well as uncovering the true relationship between the Virgin and Child, who had been covered up with extended draperies to conceal her breastfeeding pose. The paint was reasonably soluble, and combined with the probable prudish motive can perhaps be dated to the Victorian era. The reworking of the panel gave it the appearance of a Victorian pastiche, detracting from the original passages that remained visible. 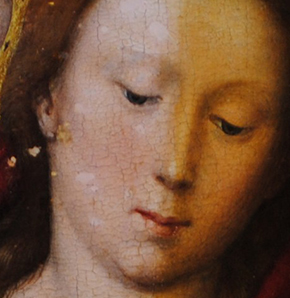 After the painting had been cleaned, its exquisite details could be properly appreciated, although the fragmentary nature of the panel was also clearly apparent. Rather than being a small rectangular painting, it seems that the painting belonged within an engaged arch topped frame which had been subsequently removed. Perhaps the painting was part of a larger object incorporating other scenes of private devotion or a donor portrait – many such multi panel objects have subsequently been separated. The painting has been reframed with a gilded slip cut to the dimensions of the surviving original paint.

X-radiography also revealed fascinating insights into the structure of another painting, ‘Head of a Boy’ (Dyce Bequest, Dyce.84), after Rubens, where the original paper support had been laid down onto panel (Figure 3). Marilyne Beauregard examined the painting and, from an x-ray image, identified further studies from the original Rubens composition on the reverse of the paper that had been patched in at the bottom corners. Perhaps this reflected a student artist’s thrifty use of paper which was then an expensive material.

Paint sampling of blue pigments used in two paintings led to a better understanding of when they were probably painted and how they would have originally appeared. The child holding a rattle, conserved by Carolina Gray, was found to contain azurite, a mineral pigment. A painting from the same century of a landscape by Philips Koninck used the alternative smalt pigment, created from crushed blue glass. Smalt often degrades losing its colour and turning to brown, and this degradation has altered the tonal recession of the mid to far distance landscape. Amongst the paintings was a display of a selection of blue pigments available to artists in different centuries. 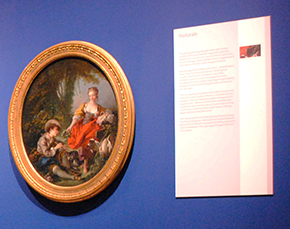 ‘The Poet Observing Nerea with Her New Lover in Her Grotto’ by Henry Fuseli entered the collection entitled ‘Courtship’ and unattributed to an artist. The darkened paint surface, with copious drying defects exhibited by particular passages, would point to a nineteenth-century British painter and, stylistically, the painting fitted amongst Fuseli’s oeuvre. Identification of a print after Fuseli showing the same subject gave further strong evidence for the attribution. After the presence of arsenic was detected by Lucia Burgio, Object Analysis Scientist, using XRF analysis, Caroline Rae undertook paint sampling and was able to confirm that the paint layers contained orpiment, an unusual and poisonous pigment that she had discovered the artist used copiously in other works. A colourman’s stamp was found on the reverse of the canvas from the supplier Thomas Brown of High Holborn, a known supplier of the artist identified by Rae.1

The painting was covered in dust and surface dirt and this material was removed by Valentina Palagi, paintings conservation intern. Varnish removal was not attempted as Fuseli was suspected to have incorporated varnish into his paint medium, a widespread practice in this period. The painting was revarnished in order to unify the surface appearance but the subject remains somewhat dark and mysterious thanks to the inherent problems associated with the artist’s choice of materials.

This display was the result of a fruitful collaboration between curator Ana Debenedetti, Nicola Costaras, Head Paintings Conservator, and the Paintings Conservation Section. It demonstrates the importance of a dialogue between conservators and curators to understand objects and also the important contribution made by interns in paintings conservation to scholarship in the museum. As interns, the educational nature of their role means that they are able to undertake research into materials and techniques that is not always possible in the day-to-day work of the staff of the department.

1. We are grateful to Caroline Rae for visiting the V&A in December 2012 to examine the painting and for considering it in relation to her research into Fuseli's materials and techniques and workshop practices (Rae, C. ‘A Technical Investigation into Selected Works by Henry Fuseli’, Final Year student project, Postgraduate Diploma in the Conservation of Easel Paintings, Courtauld Institute of Art, 2010).