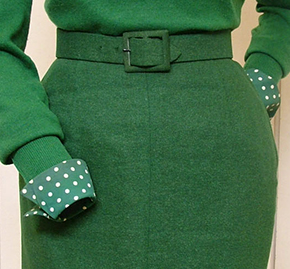 October 2012 saw the opening of ‘Hollywood Costume’, a three-gallery exhibition at the V&A which displayed over 130 costume ensembles from a century of movie-making history. The exhibition examined the work of the costume designer and their central role in the production and creation of a film character. Couture-designed garments gain status because of cut, construction and the reputation of the fashion house and designer who create them. The objects featured here have become iconic largely because of the actor that wore them and the character they portrayed. Charlie Chaplin’s bowler hat and bamboo cane, for example, can conjure an image that includes less tangible characteristics, such as his turned out feet. It was, therefore, a core aim of the Curator for the exhibition, Professor Deborah Noodalman Landis, to achieve more ‘movement’ through the mounting process then ever before, in order to bring the costume and characters to life.

It was a daunting task to create and simulate poses and interactions for this volume of ensembles, each with condition issues or vulnerabilities, a unique body shape and specific pose to take into consideration. The idea of using bespoke character-based mannequins was explored, however production problems made them unattainable for this project, due to time and cost restraints.1 To aid decision making the costumes were broadly divided into three groups according to costume style, size and desired pose, allowing them to be assigned a mannequin or dress form. Standard dress forms with a central display pole were chosen for costumes that covered the body, with two pole supports inside trousers, where possible, for stability. Full-figure fibreglass mannequins were used where a body was needed to contextualise the costume, and bespoke mannequins, commissioned from Proportion London Ltd. were required for extremely specific poses combined with non-standard costume sizes. 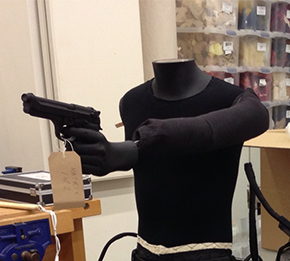 During the project, several key techniques were developed to adapt the ready-made mannequins to the poses required from the design brief. Some of these are explained here. For example, Plastazote ® 2 is extremely useful for constructing mounts and packing for a variety of objects because it is inert and very versatile. Whilst it is soft and malleable, it also has rigidity which can create shape and structure: 8mm thick sheets proved ideal to construct leg supports for costumes. The technique developed involved wrapping a sheet around a mannequin leg to create a pattern. Once removed, the seams were adhered together using hot melt glue and the legs covered with textile, which not only softened the forms and provided reinforcement for the shape, but also made them easier to dress, as well as reducing abrasion to the object interior. The supporting pole either went through the leg, or the torso was supported by fixing the stand into the small of the back. This technique was used to best effect on the mount constructed for the costume worn by Kim Novak in Alfred Hitchcock’s 1958 film ‘Vertigo’. The stance created inside the fitted pencil skirt was extremely feminine, capturing both the spirit of the character and period in an inexpensive but dramatic manner (Figure 1).

The limitations of mannequin arms, often lacking in flexibility and versatility, were highlighted during preparations for the exhibition. Although Proportion London Ltd supplies wooden articulated arms that plug into torso stands, they are only available in two sizes with distinctive hands and limited articulation. To adjust the arm, lengths of stable, but malleable, 6mm aluminium sculpture wire were attached to the basic arm fixing at the shoulder. This adjustment meant we could continue to use Proportion workroom torsos, but now had much more freedom regarding the arm length and position. It was also possible to attach fibreglass hands to the wires using a grub screw fixing, opening up possibilities for variations in finish. 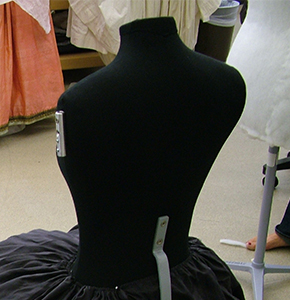 Figure 3. One of the approaches for the seated characters on low plinths with wheels, Photography by V&A Textile Conservation Studio. © Victoria and Albert Museum, London

It was important for the narrative of the exhibition section ‘Gunslingers and Blades’ that characters were not only posed in action, but the costume had to appear to be responding to the movement of the pose. This was most dramatically achieved in the display mount made for the character of Neo from the 1999 film, ‘The Matrix’ where the overcoat appears to billow. A support frame was built using a combination of bendable aluminium armature and ridged steel wires fixed to the small of the mannequin back at the opening between trousers and jersey top (Figure 2). To provide support, the wires were padded and covered and layers of net were attached to prevent the coat from collapsing between them. Although a large structure, the frame is discrete. It was covered in black fabric to match the lining and, positioned in the gallery with low lighting, it is virtually invisible.

Condition strongly influenced whether the costume could be displayed in the requested pose, how dramatic that pose could be and whether modifications were necessary to reduce the impact on the costume. This was particularly evident in the work carried out to display the heavily-beaded silk gown and jacket worn by Carol Lombard in 1936 in ‘My Man Godfrey’. 3 There was concern for this costume, typical of the period, that the weight of the beads would create stress on the fine silk ground fabric. A reclining figure was agreed with the addition of support tapes stitched to the dress interior to reduce overall tensions. The mannequin was secured at the hands and feet to a display board so that it did not rest on the object - this also simplified and reduced handling for display and travel.

A request for some characters to be seated caused concern because of creasing, crushing and distortions that would inevitably occur during display. This challenge has been approached in a variety of ways throughout the exhibition. Where the legs of full-figure mannequins are hidden behind furniture, prop trousers have been used. Original trousers and skirts are mounted onto torsos that float above the seat or plinth using a fixing into the small of their back. Soft, lightweight Plastazote ® legs and bottoms were built to fit inside the costume, reducing pressure on the object. Seated ladies with big skirts such as three costumes in the ‘Royal Romance’ section, have torsos that are attached to simple box plinths which fit inside the voluminous skirts of the seventeenth and eighteenth- century-style costumes (Figure 3).

‘Hollywood Costume’ was one of the most ambitious exhibitions V&A Textile Conservation has prepared for display in recent years. It was a really successful team effort that necessitated the development and advancement of already established mounting and packing techniques.

Sponsored by Harry Winston, with special thanks to Mr David C. Copley, with thanks to the Blavatnik Family Foundation, Travel Partner – American Airlines, Technology Partner – Samsung.