Plaster casts and electrotypes have been collected since the early days of the creation of the South Kensington Museum, known, since 1899, as The Victoria & Albert Museum. Some of the plaster casts currently on display in the two Cast Courts date from as early as 1857. The art of casting was then being developed and presented the obvious advantage of being able to increase the art historical references necessary to supplement the existing collection. The acquisition of this type of object also reflected a wider political desire to reform the training of art and design in England and to improve the production of English goods from an artistic perspective, so the country could compete more favourably in foreign markets.Plaster casts and electrotypes were consistently acquired until the early twentieth century to the point where the collection was displayed on its own in the Museum’s Cast Courts, offering a broad spectrum of examples to learn from.

The two Cast Courts have gone through several trends since they were first celebrated; later, in the 1920s, they were threatened with closure, and then refurbished in the 1980s. Up to the present day, the constant use of this collection by students and the wider public defines the Cast Courts as one of the most popular places within the V&A. The Museum has recently initiated yet another campaign to restore the two Courts, with the aim of recreating their original decorative scheme, improve the interpretation of casting processes and preserve the collection (Figures 1 and 2). Within the scope of the project, the conservation brief was to ensure the structural stability of the objects and remain minimal in its approach to cleaning and, if possible, improve the overall appearance of individual objects. This article will concentrate on the plaster casts only. 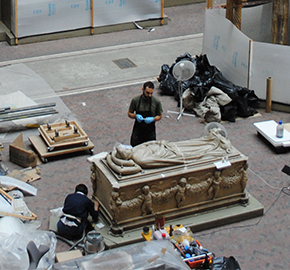 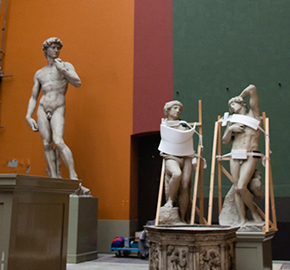 Figure 2. View of Cast Courts G46b, presently closed to the public, showing the original floor after removal of the lino and paint colour tests (green and red) on the wall following research into the original decorative scheme.  © Victoria and Albert Museum, London

As part of the project, the Museum’s sculpture conservators were therefore presented with the opportunity to assess closely the condition of these casts. In terms of past interventions, the records prior to the 1980s are generally scarce, although groups of plaster casts are known to have been, at times, the subject of a ‘restoration’ campaign, often by painting over a dirty surface in a more or less artistic manner. Attempts to clean plaster casts using abrasive methods can also be observed. Many interventions have taken place over the years to respond to the many damages, often caused by a public not always aware of the fragility of plaster.

In the first category, the casts are painted and can present different characteristics, for example, a fairly uniform paint layer that is not always well adhered to the substrate and subsequently prone to cracking or shrinking. This is often cream-grey in colour. This type of paint is interpreted as an early paint layer applied to the casts, possibly applied on arrival at the museum when fragments were broken during transportation or installation, to hide major defects. Its cleaning is only relatively successful as the surface tends to remain grey due to the irreversible effect of pollution on the paint layer.

Another type of paint, also uniform in appearance and better preserved, can be found on top of a very dirty surface. Although the cleaning level can be satisfactory, the dirt under the paint seems to show through the paint layer leaving the general appearance looking somewhat grey.

Some casts have also been painted in a muddled manner using different shades of brown to highlight the volume of the object. This is done more or less skilfully, depending on the ability of the painter.

Finally, there are objects painted to imitate the appearance of metal, such as bronze, or specific materials, such as red sandstone or polychrome surfaces.

In the second category, the casts are coated. The coatings vary in appearance from a yellowish, more or less transparent film to a clear one, giving the plaster the appearance of a saturated and polished surface.

Our general understanding is that, in most cases, the plaster casts will have been coated in some way and cases where the plaster is exposed are rarer.It has become clearer, through examination under a microscope, that some objects have been affected by the surrounding environment, which, in the past, was probably higher in relative humidity: the result is that there are areas of loss of the coating and also of the top layer of the plaster surface, leaving the plaster more exposed and susceptible to degradation. These areas have proven to be more difficult to clean since the plaster has absorbed the pollutants.

On the whole, the nature of this type of surface has allowed the conservators to use a wide range of cleaning techniques, with the aim of removing loose and deposited dirt. The basic techniques have been based on dry processes such as chemical sponges and sometimes erasers, but also on Blitz Fix® sponges lightly damped in de-ionised water and a latex-based poultice, Anjusil®. A combination of the above and adjustments in the application of techniques have been necessary to respond to the variations in the type of surface (Figures 3 and 4). 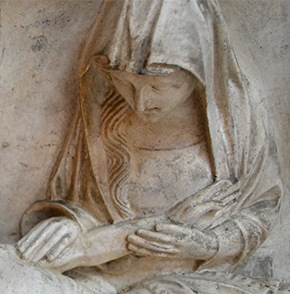 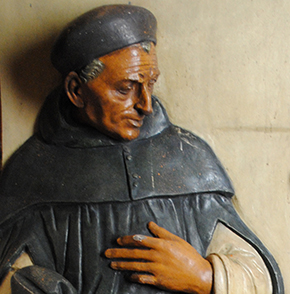 The objects displayed in these two Courts are an exceptional representation of the taste of the nineteenth century, in terms of canons of beauty and artistic references, but also, certainly, in terms of technical achievement. We are in the first stages of collating information about the actual cast makers, thirty-nine of whom are represented here. They have largely been forgotten by historians, so a better understanding of the technology they followed can contribute to promoting them and their businesses within the history of plaster casts. The scale and the meticulous work observed on these casts provide evidence of the high technological skill of the plaster cast makers at a time when processes for making things were being influenced by innovations in the industrial sector.