Are You Being Insured? 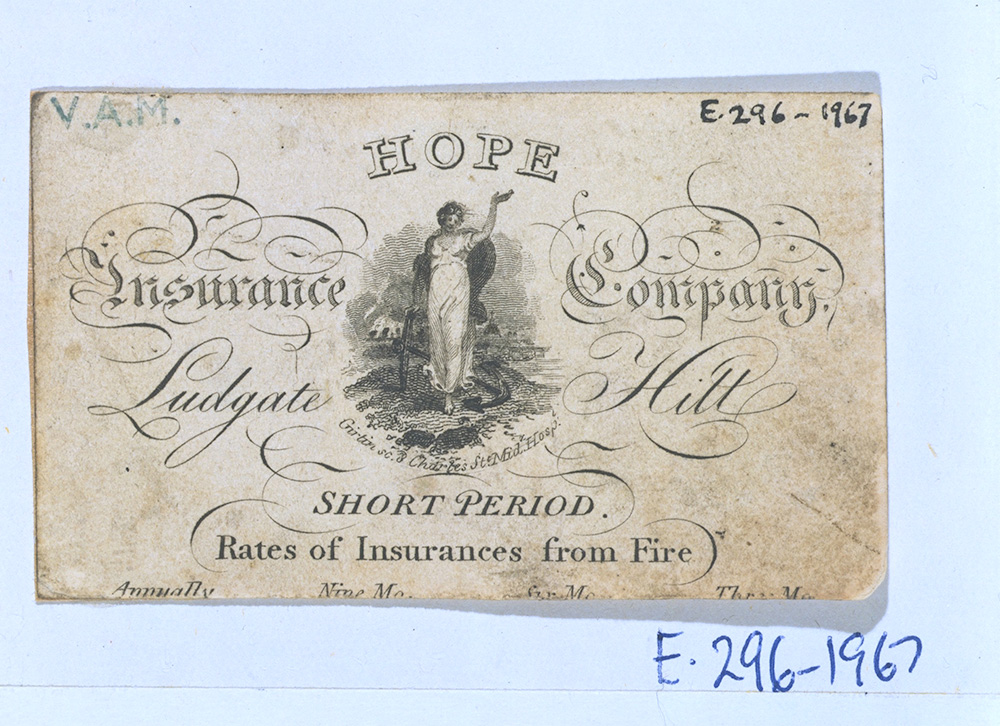 As is intrinsic to ephemera, the materials of this object – paper and ink – have no value and had only a little more at the time of its making. Once made, it was given away for free. It bears the figure of Hope, one of the three theological virtues with Faith and Charity. She and the insurance company advertised evidently correspond. The object’s combination of image and text, its shape and size, and its not-obvious purpose (it is not a form or a ticket or a receipt) mark it out as a trade card.

Trade cards can fruitfully be approached on two fronts: shopping and printing. Commissioned by traders to promote their presence and to represent their goods, their success correlates to the emergence of fixed shops from the 17th century. They self-consciously celebrate a fantasy land of the joys of shopping: the displays in the glass windows, the abundance of things, the framing of things in mirrors. The modest batches in which they were produced suggest that they were given away at sale;  they were a mark of exclusivity.(1)

On the other hand, trade cards are an example of product innovation by the printing industry. They were one of a range of everyday jobs that made a living for a small-scale business, including reams of commercial ephemera such as printed rates of exchange, contracts and insurance policies.(2)

The trade card for the Hope Insurance Company knowingly fits itself into the conventions of its genre. It uses the long-standing practice of different typefaces. There is a relationship between the illustration and the business, in this case by its name rather than its wares. The address is given visual prominence, and the products of fire insurance, however immaterial, are listed.

Yet a trade card for insurance sits uncomfortably with trade cards as a celebration of the joy of things. There is no thing to insure; rather, you take home peace of mind and a piece of paper to attest to it. Trade cards were used by other services, for example lawyers and libraries, but those businesses, like others, tended to be named after their owners. This insurance company is named after an abstract idea and after the personification and imagery of that idea.

In fact the allegory of Hope was widely disseminated by the early 19th century.  She appears across a network of paper. This network tended to the secular, the de-political, low art and, often, forms of notional value: watchpapers, banknotes, lottery tickets and trade cards for all sorts of businesses.

Like many other kinds of organisation of the time then, this company used imagery of Hope, identifiable by her anchor. Unlike other organisations it adopted the figure’s very name. This is instructive of the relationship between text and image. The image takes on new meaning when it is associated with a company. It assumes even greater power from a direct affirmation of the abstract notion behind it.

But it is not ridiculous to interject that one takes out insurance when one has given up on hope or Hope. Hope runs contrary to something one pays for. Yet, by using Hope, the company tapped into common, comfortable imagery, and a ready-made narrative. In the absence of a material product, this was especially important. Moreover, Hope is future-looking as, of course, is insurance. She has attributes of security. She aligns hope for the future with the systematic security that insurance brings. Hope is also close to aspiration. Already in this period fire insurance had huge appeal, across regional, class and gender boundaries.(3)

The company’s adoption of Hope was within the grand naming conventions of its rivals. The decade 1799-1809, which saw the establishment of the Hope Insurance Company in 1807, witnessed the greatest ever number of new insurance offices. With names like Eagle, Globe, Hercules and British – and emblems to match – all of them were selecting their names with an eye to imagery. Clearly insurance felt a need to appropriate popular but weighty ideas and construct a language that implied strength and trust.

From its beginnings at the end of the 17th century the fire insurance industry nurtured objects to compensate for its lack of a material product and, thereby, enliven its business. It showed innovation in marketing. Evocative company names such as Sun and Phoenix were often taken from their firemarks, the cast objects placed on buildings to identify those that were protected. To these names and emblems were matched silver badges, buckets, uniforms and office furniture, medals for directors, parades and promotional paper. From the early 18th century it was not unusual for insurance policies to depict scenes that displayed these branded objects. These practices continued into the 19th century. It is known that Hope’s emblem of an anchor appeared on the firemark, on the company seal, and on firemen’s buttons and badges. Over the entrance to the office stood a stone figure of Hope.(4)

Thus the combination of text and image was germane equally to the insurance industry as to trade cards. Interestingly, collections of trade cards indicate that they were not used by fire insurance offices until the last quarter of the 18th century.(5) This corresponds to a period of acceleration in the number of fire insurance policyholders and intense competition between companies. The fact that insurance companies adopted the use of trade cards during this time suggests that they were perceived to serve a purpose as weapons in the battle for customers. It is my contention that the Hope’s use of the form marked an advance on the potential of text and image. In this it was in line with the new practices of its industry: the embracing of notions rather than just objects in the selling of an object-less product.

1. Maxine Berg and Helen Clifford, ‘Selling Consumption in the Eighteenth Century: Advertising and the Trade Card in Britain and France’, Cultural and Social History, 4:2 (2007): 149.

5. The trade card for Robert Furnass, Broker, is the earliest insurance-related card that I can identify in the collections of the British Museum, the V&A, London Metropolitan Archives (formerly of the Guildhall Library) and John Johnson Collection. I date it to c.1770, based on its rococo style, a note of 1775 ‘in his favor’ and a trade directory entry for the engraver at the address supplied. British Museum, Prints & Drawings, Trade cards Heal 3.13.