The Cabinet with the Letter: Luxury and Poverty in 18th-Century Würzburg

The letter hidden inside the writing cabinet made by the journeymen Jacob Arend and Johannes Wittalm paints a rather bleak picture, as revealed in Katrin Seyler’s article in this issue of the V&A Online Journal.(1) Faced with food shortages and the impact of war, the makers turned first to drink, and then sought to leave Würzburg, their place of employ, altogether. Yet in contrast to this sombre note, the cabinet itself embodies both luxury and extravagance (figs. 1 and 2). All the surfaces, including doors and drawers are curved, whilst marquetry in a whole range of materials has been used to decorate the piece from almost top to bottom. Curtained doors, flowers, birds, lanterns and even the gallery of a house, complete with balustrade, are all featured in this elaborate marquetry (fig. 3). The upper set of doors, meanwhile, are inlaid with the arms of Von Holach, the title taken by the first owner of this cabinet, Johannes Gallus Jacob (although at the time of completion, 1716, Gallus Jacob had not yet been ennobled) (fig. 4).(2) Despite their differences however, like the letter, this writing cabinet tells us a great deal about the men who made it, and the wider cultural contexts within which they worked. 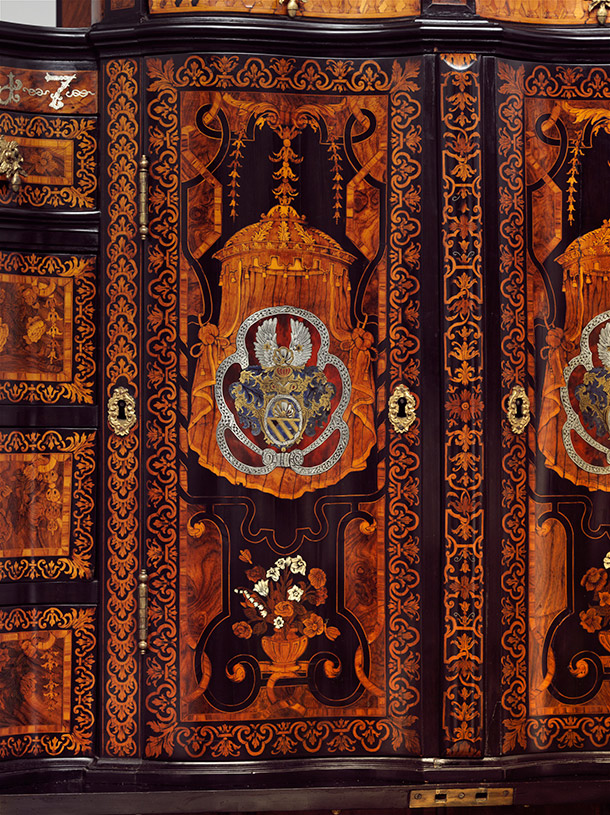 The creation of such a writing cabinet was no small technical feat, and is testament to the great skill of its makers. Boulle marquetry, used to decorate this piece, involved several stages. Before the marquetry could be cut, the materials had to be flattened and sanded down to the same thickness, whilst some of the layers like shell or horn might be coloured using pigmented fish glue. The layers of marquetry were then assembled into a packet, the design glued on top and then cut, starting from the centre outwards. Once the entire design was cut out, the marquetry could then be assembled in contrasting light and dark shapes. Panels of these designs were then glued to paper, ready to be sold.(3) Since the panels could be bought ready to be inlaid on a piece of furniture, it is unclear whether Arend and Wittalm were the craftsmen behind the actual creation of the marquetry. Yet even if they were not, we can see their technical skill in the application of the panels. Since all the surfaces of the cabinet are curved, the marquetry would have been far from straightforward to apply. Indeed, even the doors are not flat, and thus the panels would have to have been shaped accordingly (fig. 5).(4)

Where might these skills have been acquired? In the letter, Arend notes that he originated from Koblenz. A little under halfway between Koblenz and Würzburg lies Mainz. In his article on the cabinet, Ian Caldwell suggests that it is likely that Arend passed through Mainz on his way to Würzburg. If so, this can offer some suggestions regarding Arend’s training. Mainz was renowned for its cabinet-makers, and the Joiners’ Guild regulations in particular required members to produce a cabinet as their masterpiece.(5) It is possible, then, that it was here that Arend honed his skills. Indeed, the Schloss Fasanerie museum in Fulda has two other cabinets attributed to Jacob Arend, which further demonstrate that he had acquired notable skill in cabinet-making and the application of marquetry.(6)

Meanwhile, the sheer range of materials used in this piece reveals the wider contexts of trade in this period. The carcase of the cabinet is made from pine, whilst the marquetry contains turtle shell, horn, brass, pewter, ivory and a variety of woods including walnut, sycamore, boxwood and tulipwood. The mounts are in lacquered brass and the drawers lined with embossed paper (figs. 6 and 7). Whilst the woods might come from closer to home, the more exotic materials were sourced from further afield. Turtles were found in the seas around Africa, Asia and America, whilst ivory might come from Ethiopia, Guinea, or the coast near Zanzibar.(7) Not only did the use of so many different types of material indicate the cost of the piece, and thus prestige of the owner, but it also bears testament to the wider trade networks operating in the 18th century.(8) 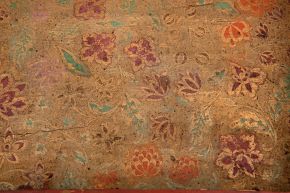 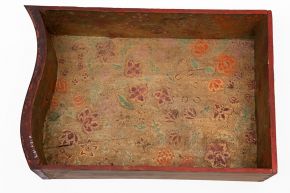 Once assembled and finalised, the cabinet functioned not just as a utilitarian object, but as a status symbol, speaking volumes about its owner and his wider cultural contexts. Writing cabinets such as these had become important items of furniture by the 18th century, occupying a space in either a study or library.(9) They displayed the eminence and learning of the owner by housing significant documents and writing materials. Indeed, their role in storing personal treasures is evident from the name given to them in German, trisur, relating to treasure.(10) Despite the prestigious message embedded in this cabinet, its owner, Gallus Jacob, fell from favour soon after its completion.(11) The fate of the cabinet immediately after this is unclear, yet over a century later, in 1843, it was purchased by the Englishman John Gibbons, and appears in the background of the 1846 painting by Charles Robert Leslie of two young women, assumed to be part of the Gibbon family.(12) Entitled The Shell, the cabinet is shown to be the storing house for a collection of shells – a new family’s own collection of treasures.

I am grateful to Sarah Medlam and the Furniture, Textiles and Fashion Department at the V&A for their help in the preparation of this article. Special thanks to the editor for her feedback and assistance throughout.

8. On 18th-century luxury goods, see: Dena Goodman, ‘Furnishing Discourses: Readings of a Writing Desk in Eighteenth-Century France’, in Luxury in the Eighteenth Century: Debates, Desires and Delectable Goods, ed. by Maxine Berg and Elizabeth Eger (Basingstoke: Palgrave, 2002), 71–82; and Michael North, ‘Material Delight and the Joy of Living’: Cultural Consumption in the Age of Enlightenment in Germany (Aldershot: Ashgate, 2008).