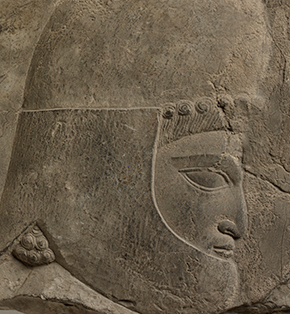 Bas-relief fragment from Persepolis, front, 5th century BC, Museum no. A. 13-1916. © Victoria and Albert Museum, London

Welcome to this year's edition of the V&A Online Journal. Our fifth issue features writing from current Museum staff, external scholars and two former graduates of the V&A/RCA MA course in the History of Design, which celebrates its 30th anniversary this year.

Allow our contributors to guide you from ancient Persepolis, through Renaissance and Early Modern Italy, to France in the 18th and 19th centuries, taking in architecture and archaeology, prints and drawings, amber and porcelain. In this issue, each article engages in some way with collecting practices and curatorial methodologies, both past and present, while new discoveries and hidden histories have emerged as the common themes. We begin with an in-depth study of the Santa Chiara Chapel, co-authored by Donal Cooper and Meghan Callahan, presenting new research and tracing the various contexts in which the chapel has been situated, from its original setting in 15th-century Florence, to its reconfigured display and latest reinterpretation in the Medieval & Renaissance Galleries. Amid questions of authenticity and the rehabilitation of historical contexts, the story of the Santa Chiara Chapel reminds us of the ways in which objects are mediated by display, how curatorial and scholarly narratives are themselves historically specific - with meanings underlined or obscured - and how objects might occupy multiple contexts simultaneously, be they aesthetic, social, cultural, religious, technological or political.

Just as the large-scale transformation of public galleries affords opportunities for new research, the vast swathe of objects in storage at the Museum is similarly ripe for new discoveries. Lindsay Allen reports on just such a find: an unassuming fragment of bas-relief with a beguiling Persian provenance, found in the sculpture store and examined here for the first time since it entered the collection in 1916. Once again, we are reminded of how the narratives we construct around objects are shaped by present day preoccupations, as Allen traces the shifting interpretations of Persian bas-relief sculpture in line with British Imperial ideologies. A shorter but significant gap in scholarship is closed in the next article, as Rachel King pursues a lead left dormant since 1985, and revisits material she initially encountered as a first year student on the History of Design MA. Since V&A curator Marjorie Trusted's suggestion, in 1985, that amber in the Museum's collection may have been sourced and worked in Italy, scholarship on amber has remained dominated by studies of Northern Europe and the Baltic region. Pursuing Trusted's lead, and using new sources, Rachel provides a fascinating introduction to the story of Italian amber.

New technology is key to our next story, one of collecting and connoisseurship in 18th-century France. Assistant Curator in Word & Image, Bryony Bartlett-Rawlings, writes of her involvement in the discovery, under ultra-violet light, of a previously illegible inscription on the mount of a sketch by Charles Le Brun. Examination of the hidden inscription has revealed details of the drawing's early history, which takes us to the heart of connoisseurship in 18th-century France. Documenting an investigation undertaken at the V&A as part of the preparatory work for a comprehensive catalogue of Mariette's collection by Pierre Rosenberg, this article points to the day-to-day efforts of V&A staff, particularly Assistant Curators, in facilitating the research of external scholars, aside from new research generated within the Museum.

We complete this issue with an intriguing object study by recent V&A/RCA MA graduate, Soersha Dyon. The object in focus, a recent acquisition to the Prints and Drawings collection, is a preparatory sketch attesting to the design and manufacturing process of a well-known Sèvres dinner service, whose constituent pieces have all but vanished. It is more often the case that finished wares survive, while the ephemeral evidence relating to processes of making are lost, but we find the opposite in this case, making the sketch all the more poignant as a rare and illuminating survival of early-19th century manufacturing.

The V&A Online Journal aims to provide a forum for research papers from scholars inside and outside the museum, in a bid to promote dialogue and open up new ways of interrogating material culture, current design practice, histories of design and all other related fields. Provided that submissions meet the academic standards set by our Editorial team and peer reviewers, we welcome articles for future issues on the history of art, architecture and design relating to the V&A's collections, public programme or institutional history; features focusing on new acquisitions or objects linked to V&A exhibitions; reflections on the educational or creative industries role of the Museum and reviews and previews of V&A publications, conferences or displays.

Further details on submission are available on the Submission Guidelines page and we can be also contacted at vandajournal@vam.ac.uk

We would very much like to thank our authors and all who have contributed to the successful production of this issue: