Although monumental in scale, this six foot tall carved wooden panel by Grinling Gibbons (1648 – 1721) depicts an intricately detailed, grisly crowd scene against a complex architectural backdrop. Gibbons' mastery of technique and composition give the piece an impressive illusion of depth and perspective.

This virtuoso piece of wood carving depicts the Stoning of St Stephen, the first Christian martyr (born about 5 AD – died about 34 AD). He was put to death after arousing the anger of the legislative council in Jerusalem with his sermon arguing for the divinity of Christ.

Take a fascinating tour of the violent and dramatic scene, and discover hidden details of the composition:

Revealing the story of the panel

The panel was conceived as a decorative object, designed to be displayed on a wall. Despite the biblical subject represented, it was probably intended for a secular context, rather than a church or a chapel. No record has survived of the commission for this piece and Gibbons may well have produced it for his own enjoyment, since the panel remained in the artist's possession until his death in 1721.

Unlike other panels Gibbons created very early in his career – such as King David and the Crucifixion – the Stoning of St Stephen is not a copy after an engraving. Instead, Gibbons took inspiration from various sources and may have added his own invention. Dating this work is difficult without any documentation. Given that he probably created it for himself as a piece to show to patrons, he may have worked on it over a long period during the 1680s.

The most remarkable element in this panel is the sense of depth and perspective that Gibbons was able to create. The grand architecture is presented diagonally using an Italian perspective method to create illusionary spaces. This was also very fashionable in theatre set design at the time. The proportions are so convincing that the buildings look like accurate architectural models. However, the edifices are not copied from real buildings, instead recalling Renaissance Italian architecture that Gibbons would have been familiar with through the prints and paintings that he collected and sold.

Gibbons was also inspired by the Roman Baroque trend of topping buildings with statues. In this panel he copied several famous antique statues which were widely known in England through casts and engravings. The Medici Venus and the Dancing Faun both crowning the loggia on the left are copies after classical sculptures that belonged to the Medici collection, today displayed at the Uffizi in Florence. Unlike the originals, Gibbons' miniature wooden figures are reversed, meaning that he must have been working from prints depicting the antique statues. He may have owned a copy of Signorum Veterum Icones, a series of 100 prints by Jan de Bisshop, containing classical sculptures from Dutch and Italian collections in the 17th century, reproduced from various viewpoints.

In 1682, Gibbons carved a virtuoso panel – the so-called 'Cosimo panel', commissioned by King Charles II and sent as a diplomatic gift to Cosimo III de' Medici, Grand Duke of Tuscany. The fact that Gibbons placed two small statues belonging to Cosimo III in the centre of his Stoning of St Stephen panel, could be seen as a subtle way to recall the prestigious commission he had completed.

Other elements of the architectural ornaments such as the balustrades and intricate acanthus whorls in the frieze, relate to Gibbons' own decorative carvings in palaces, country houses and churches. The scrolled acanthus was one of Gibbons' recurrent ornamental forms from early on in his career, but he varied it in each setting. In the Stoning of St Stephen, the acanthus motif curled on itself in a complex whirlpool form is the crowning element in St James' Piccadilly's reredos (ornamental screen at the back of the altar), carved in 1684.

The carved panel measures 185cm by 121cm and is a complex assemblage of boards of different size and depth. Some elements were joined before carving, while others were first carved before being attached to the panel. Red and ochre paint were later added, and the central group of figures were carved separately and then attached to the background. The complex structure is also visible from the side.

Gibbons was able to create an impressive sense of depth in his composition by gradually decreasing the thickness of the relief from the foreground to the background. The windows and loggias in the buildings are hollowed just enough to create the illusion of depth. Viewing the panel from above allows a better understanding of the successive layers necessary to create the composition. The elements in the foreground are carved fully in the round, while figures in the backgrounds are carved in high relief. The landscape is also very shallow, giving the impression of distance.

Despite the fact that this work was meant to be observed closely, Gibbons worked in a similar way to his larger pieces, only carving what the viewer could see. The face of the Roman soldier in the foreground, when seen from behind, has been given only a rough shape and the ear merely sketched.

The Stoning of St Stephen panel stayed in Gibbons' house in Bow Street, London, until his death, displayed in his Gallery of Pictures. It was then purchased by James Brydges, 1st Duke of Chandos, possibly at the sale of Gibbons' effects that took place shortly after his death. The Duke, who was a great patron of the arts, displayed the woodcarving in the stately home at Cannons. However, in the 'South Sea Bubble' financial crash of the 1720s, he lost a considerable amount of his fortune and his finances never recovered. When he died in 1747, the house was destroyed and all its contents, fixtures and fittings were sold at auction in a 12-day sale to pay the debts. Gibbons' carving was among them and was auctioned on the first day. It was recorded in the catalogue as: 'A most matchless carving in wood, by the famous Gibbons, of the stoning of St. Stephen, in a walnut-tree case'. It was purchased at the auction by Mr Gore and later passed to Mr Gordon Rebow who, in turn, sold it in 1898 to the South Kensington Museum (now the V&A).

Interestingly, the woodcarving – which had been highly praised in the 18th century – didn't receive immediate approval from the Museum's directors. Mr Gordon Rebow had originally asked for £3,000 for the panel, however, the Museum's director at the time, Caspar Purdon Clarke, gave a lukewarm reply, noting that, 'Although this carving is probably Gibbons' masterpiece I am not sure that you would care to recommend its acquisition by the Museum except at a much more moderate price'. This opinion was confirmed by the Director of Art, Thomas Armstrong, who, while agreeing on the carving's artistic qualities, stated that 'if it were offered as a gift I do not think it would be refused but I should be sorry to see it brought even for one tenth of the price asked'. In the end, the Stoning of St Stephen was purchased for £300, a tenth of the price originally asked.

This exceptional piece of wood carving, unique in its genre by its size and complexity, remains nearly intact after over 300 years. Comparable to a painting, but made in relief, the panel fascinates by its combination of grand scale and countless intricate details. Gibbons' mastery and invention are revealed in the sense of depth created and the variety of expressions among the many figures. The gruesome subject matter of a public execution is transcended by artistry. 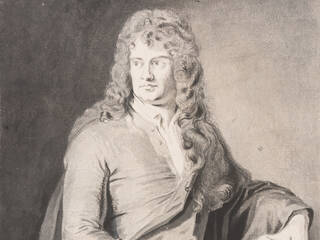