“Once these animals are turned loose, they will revert to type and waddle off into the night in search of beer and curry.”

They Say A Day Is A Long Time In Politics…

On Tuesday night, we headed to the RIBA’s headquarters in Portland Place for the RIBA Trust’s annual lecture, industry get together, back slapping bonanza, business card swap-meet and all around networking event. As director of the RIBA Trust, our good friend Charles Knevitt opened this year’s event, which had suddenly gained unexpected political significance for being the swansong for Tory MP Mr Ed Vaizey, the outgoing government minister in charge of architecture. For reasons peculiar to politics, our new coalition government has decided to transfer Mr Ed’s architectural powers to his fellow Tory MP John Penrose after only four days on the job. Consequently, Mr Ed’s final task as architecture minister was to introduce the keynote speaker to the audience gathered at the RIBA Trust annual lecture. Bravo Mr Ed!

Exit Mr Vaizey with a bow, enter Kevin McCloud of ‘Grand Designs’ fame, freshly scrubbed and showered after his recent trip to the Mumbai slums. However, the title of Kevin’s talk couldn’t have been more English: ‘Jam and Knitting in the Urban Fabric: Thoughts on Rebuilding Communities’. 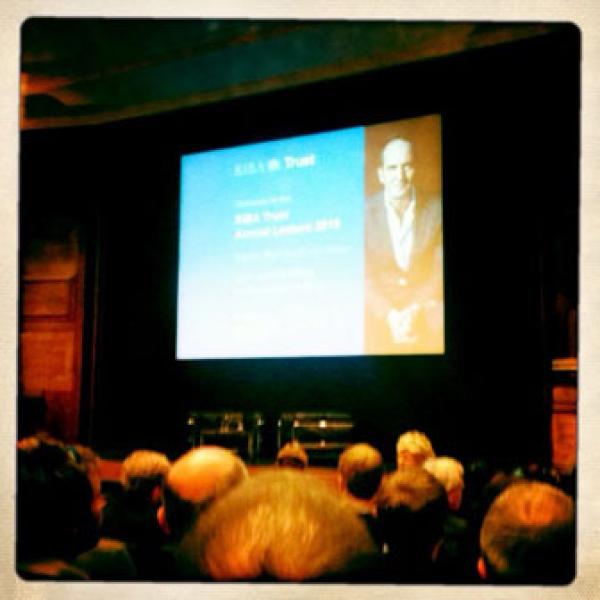 In his speech, Kevin said grand designs do not solve all the problems of cities (though we assume he meant lower case grand designs rather than his TV programme). He also suggested that true sustainability is only achieved when architects get together with local residents to make the best of whatever architecture is already in place. Basically, Kevin dislikes all the clean lines of commercial buildings and he chose to single out mass-produced contemporary housing for particular criticism, effectively labelling them un-human. “Developers don’t do ‘messy’ very easily,” he said, whereas human beings are “naturally quite messy and happen to be scrappy around the edges by nature”. Kevin believes this inherent untidiness is what gives rise to “interesting places, idiosyncratic homes and streets with that higgledy-piggledy charm”.

It turns out that Kevin McCloud prefers his houses to be sticky and messy like jam. Also, in contrast to the construction industry trend towards what Kevin called “speed, ease, delivery and sales”, he likes his buildings to resemble knitting, because it is homemade, laborious and gets done in the evening. Errrr rrrrriggghhhhttttt, clearly Kevin has never had to hand-wash a raspberry compote stain out of his favourite lamb’s wool sweater-vest.

Michelangelo and the Mumbai Slums

McCloud’s arguments about using existing architecture owe much to his experiences of the Mumbai slums, which he repeatedly cited as evidence in support of his position. And moving closer to home, he went on to mention his own housing regeneration project in Castleford, which explores the idea of public space and the factors that hold a community together. 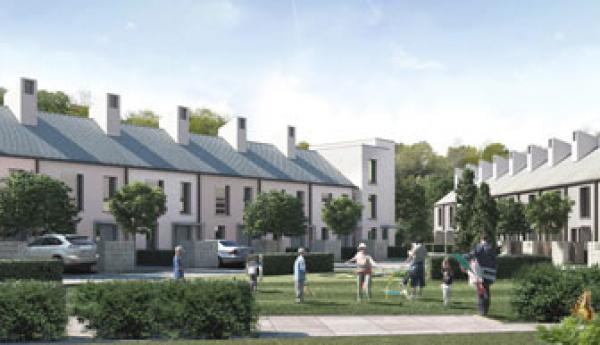 His speech also ran through a Who’s Who roll call of designers, artists and architects from past and present, including such chronologically diverse figures as Michelangelo, William Morris and Jeremy Till. Somehow he even managed to drop Burt Bacharach into the mixer. The legendary singer, songwriter and silver fox received a shout-out for his philosophical song lyric about seats: “a chair is still a chair even though there’s no one sitting there.” No one can argue with that profound statement!

What will it be, boys? Butternut Squash, BS or Both?

The first thing we saw when we walked into the post-lecture drinks reception was a roomful of RIBA luminaries knocking-back shot after shot of bright orange liquid. Irena Murray, the always well informed and level headed Director of the British Architectural Library, assured us that the orange liquid was actually butternut squash soup, so we did a few shots and wandered into the crowd, striking up a conversation with the new Barbican Art gallery curator, Catherine Ince. We talked to Catherine about an article we had recently read on the subject of students at Eton being taught how to network – an explanation for why that one school has produced a disproportionate number of prime ministers. Whether or not this article counts as good networking chat is oblivious to us. We’ve had no networking training. aberrant architecture is the product of those lesser-known schools that lacked the budget to incorporate networking on the same curriculum as English, maths and science, which is our explanation for why we had to resort to the age-old oikish tactic of slurping down a trough of red wine before we could carry on networking. Or in other words, we felt so good about meeting Catherine Ince that we immediately latched onto the nearest familiar face – Charles Knevitt – and settled in for the evening.

Ironically, Charles proceeded to compare us to the preeminent public school boys of the moment, Dave Cameron and Nick Clegg. Charles wanted to know which one of the aberrant duo most resembles Dave and which one of us resembles Nick. We couldn’t decide. We didn’t want to decide, and luckily for us, we didn’t have to decide, because the director of the V&A, Mark Jones, and the RIBA president, Ruth Reed, dropped into our network long enough to interrupt the thread of conversation. Ten seconds later Mark and Ruth made their excuses – dinner with Kevin McCloud and Ed Vaizey – before disappearing into the crowd like professional room-workers. (Aberrant might not be trained networkers but we can name-drop with the best of them. Beat that Kevin!)

Later in the evening we found ourselves in the company of ‘mantownhuman’ co-founder Austin Williams and RIBA director of learning Allan Haines. In the mantownhuman manifesto it states that the time has come to re-imagine the city. Williams wants architects to champion urbanism and view the rapid development of cities as human progress rather than eco-destruction. Interestingly, the manifesto expressly attacks the celebration of ‘alternative urbanism’ (i.e. sustainable subsistence in ‘developing’ world villages and slums), which would have made Austin a great person to be sitting next to when Kevin McCloud was extolling the virtues of Dharavi, the Mumbai slum that never sleeps. It was also a shame that Austin’s hand wasn’t chosen during the brief Q&A session, because his exchange with Kevin McCloud might have provided more edgy excitement than the other – mostly obsequious – questions that were asked on the night.

Curry and a Bevy

You can take the boyo out of the valley. You can take the geezer out of Kent. You can force them to eat butternut squash and pour red wine down their gullets like fat ducks reared for fois gras. But you should have known that once these animals are turned loose they would quickly revert to type and waddle off into the night in search of beer and curry. In our case, the night continued at The Social near Oxford Circus where upon arrival the V&A curator Abraham Thomas became all misty-eyed about the ‘big nights’ that had gone down in the same venue back in day. After last orders, our scraggly bunch of drunken architects and broken down curators tried to go for a curry. We were hungry for some ‘real’ food after ingesting a gut full of butternut squash. However, we were denied entrance by a hateful proprietor who took one look at us and declared his restaurant closed. At the time, we were crestfallen, but the following morning the health and wellbeing of the rest of the aberrant studio owed much to that one miserable restaurateur.