“The t-shirts have been designed for our street team, the vinyl graphics for the windows have been ordered, and the press releases sent out…”

All week we have been laser-cutting materials in preparation for our upcoming pop-up residency in Selfridges. 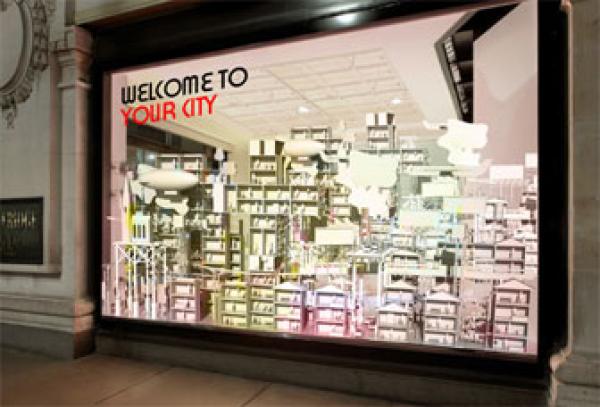 From Wednesday 15th June, part of the team will be occupying the inside of the window display, constructing the giant cityscape, pouting and throwing out some model shapes, whilst the other part of the team will be outside on the pavement, canvassing ideas from the general public, reveling in the midsummer rain showers and fighting for shoppers’ attentions with the ubiquitous green-bibbed, clipboard-carrying Antipodean charity fundraisers. The t-shirts have been designed for our street team, the vinyl graphics for the windows have been ordered, and the press releases sent out. After many amendments the roster of who is going to be appearing on the street and who is going to feature in the wonder room window has finally been thrashed out.

The Kids Are Alright

At the same time, we are still busy turning the Elephant & Castle pub drawings into cad, we had a brief studio visit from the Culture Minister for India, and on Thursday we visited Central St Martins for the foundation and first year students’ final year show. At the latter event, our task was to choose 20 projects out of the 100+ students who had submitted their work for inclusion in an exhibition appearing at the V&A later this year.

The main judging rule was that each project had taken inspiration from the V&A. In that respect, some of the work put forward for consideration was more convincing than others, although we were generally impressed by all the work on display. And we weren’t the only ones, as two thousand people had packed out the exhibition for the opening night, held on the previous evening, no doubt scrabbling and clawing at each other to see the work. When we visited the exhibition it was a far more civilized affair, and fortunately we only had to elbow The Who guitarist, Pete Townsend, out of the way.