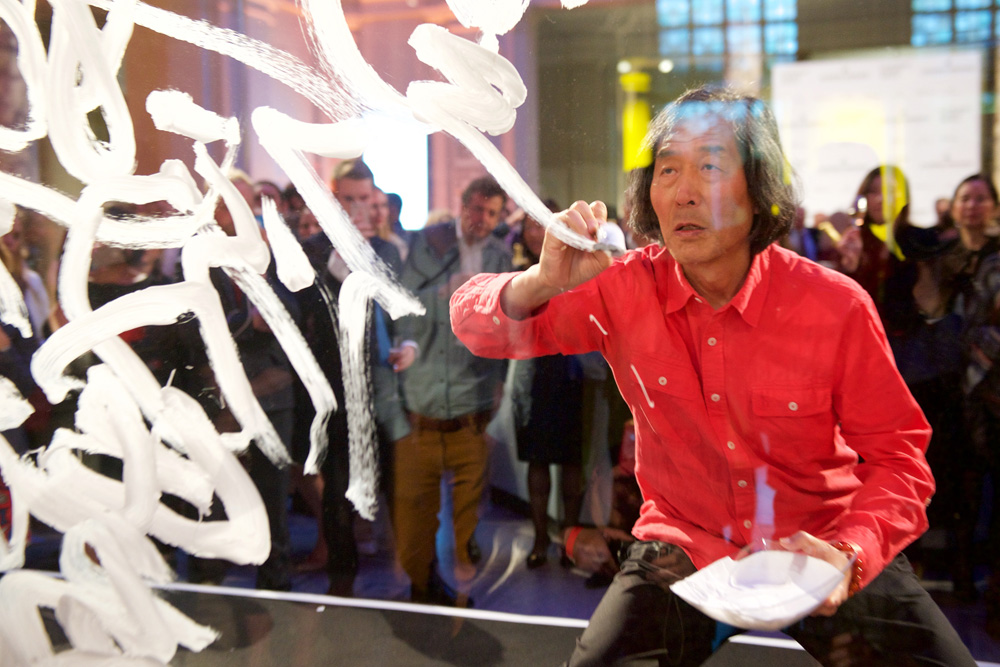 On Wednesday night London Craft Week welcomed the accomplished Chinese calligrapher Wang Dongling 王冬齡 to their glamorous launch party at the V&A. Professor Wang, who teaches at the China Academy of Art in Hangzhou, was invited to this celebration of makers and making to perform before a live audience. He took the stage with a relaxed, welcoming smile, gave the impeccably turned out crowd a polite nod, then discarded his jacket and took up his brush. Wang was here to work. Staring intently at a blank two by three meter sheet of clear perspex, he spent the next ten minutes immersed in his task. Emphatic streaks of white acrylic raced out of his brush onto the invisible canvas. As the characters emerged they appeared suspended in mid-air, illuminated by a barrage of iPhone flashes. This was going to look amazing on Instagram. The text came from the two and a half thousand year old classic, the Daode Jing, but this rendition was full of fresh life and vigour. Wang was reframing an ancient work of Daoist philosophy as contemporary performance art. While still-wet arcs of paint dripped down the transparent perspex surface, Wang generously donated his new piece, Dao Ke Dao 道可道, to the museum.

As Bill Sherman, Head of Research and Collections, noted in his words of thanks Wang’s Dao Ke Dao resonates with many areas of the V&A’s collection. Wang’s alternately controlled and kinetic actions were pure performance . The character’s sit on the border between legibility and abstraction, exploring possible relationships between word and image. Dao Ke Dao also blends archaic mad cursive calligraphy, studied in Nanjing, with abstract action painting, encountered in the USA. Wang’s work embodies the transnational tendencies of contemporary East Asian art.


Professor Wang’s choice of materials were crucial to his performance. The clear perspex surface was visible from all sides, allowing the audience to watch him in the round. As Wang’s gestures accelerated drops of paint splashed out from the confines of the characters. Thick white globules leapt onto the stage almost spattering the attentive crowd. Earlier in the day Professor Wang told me he particularly enjoyed working in acrylic paint. “It’s particularly viscous, so has a great flying white (feibai 飛白) effect”. Flying white is an historic calligraphic aesthetic that deliberately leaves the brush’s trajectory visible. The name refers to the blank spaces of paper or silk left within the splayed ink of each brushstroke. When Professor Wang applies acrylic from the stiff bristles of his calligraphy brush it leaves streaked lines that record the direction and speed of his movements. Wang translates the feibai technique from ink on paper to acrylic on perspex. This allows his process to be viewed in three dimensions, integrating an historic skill into contemporary practice.

Professor Wang wrote Dao Ke Dao in ‘mad cursive’ (kuangcao 狂草) script, racing movements of the brush developed in the Tang dynasty (618-907) by the monk Huai Su 懷素 (737-799). This is a fiendishly difficult hand to read. Deliberately so. Characters formed of numerous strokes are condensed into single undulating movements, only intelligible to calligraphic savants. During the performance Senior Curator Hongxing Zhang was able to read Professor Wang’s text by carefully following the movements of his brush. The finished work was a different matter. As Dao Ke Dao unfolded Wang began to overwrite his earlier characters. Layers of acrylic built up on previously legible text. Once finished the script was unintelligible even to Dr Zhang’s expert eye.

Mad cursive script is the historic frontline of creativity in Chinese calligraphy. Its association with uninhibited expression led many calligraphers to write it while drunk. Wang drank only water, abstaining from the free flowing champagne. Yet Sobriety did not hinder his innovation. Compounding mad cursive’s deliberate inaccessibility with his layered composition, Professor Wang’s work ceased to be a linguistic object. Words became a distilled image of calligraphic action.

Professor Wang’s challenge to the authority of language over gesture was carefully matched with the text he wrote out: the first passage of the Daode Jing. This sixth century BCE classic of Daoist philosophy begins: ‘The Way that can be spoken is not the eternal Way.’ Taking its title from this opening line, Wang’s Dao Ke Dao echoes the assertion that there are enduring truths beyond the limits of language. For Wang these truths are expressed in the craft of making.

The second line of the Daode Jing reads: ‘The name that can be named is not the eternal name’. As well as underscoring the instability of language, these words also carry a warning not to place too much stock in fame and reputation. Wang is clearly no stranger to this sentiment. While his monumental work stood drying he snuck behind it. Waving to the crowd through the transparent surface, his broad smile was framed within an age-old injunction not to take anything too seriously.