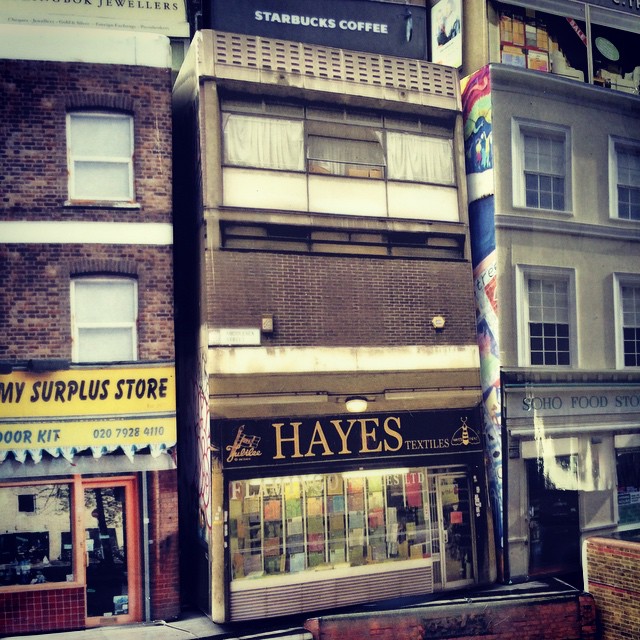 Textiles and Fabric in East London – Middlesex St, E1. It used to be called Petticoat Lane, hence the name of the market there. Spitalfields’ historic association with the silk industry was established by French Protestant (Huguenots) refugees who settled in this area after the Revocation of the Edict of Nantes in 1685. By settling here, outside the bounds of the City of London, they hoped to avoid the restrictive legislation of the City Guilds. From the 1730s Irish weavers came here, after a decline in the Irish linen industry to take up work in the silk trade. The 18th century saw periodic crises in the silk industry, bought on by imports of French silk – in a lull between the wars between the two rivals; and imports of printed calicos. The depression in the trade, and thence the prices paid to weavers, led to protests. In 1769, the Spitalfield Riots occurred, where attempts were made to break up meetings of weavers, called to discuss the threat to wages, caused by another downturn in the market for silk. This ended with an Irish and a Huguenot weaver being hanged in front of the Salmon and Ball public house at Bethnal Green. Price controls on amounts master weavers could pay journeymen for each piece were established. This removed all incentive to pay higher wages during good times. During bad times workers had no work. As the price was per piece, there was no incentive for using machinery, as master would have to pay for the machine and still pay the same price per piece to journeymen. By 1822 labour rates were so above market labour rates, that much of the employment in silk manufacture had moved to the country. Remaining manufacture tended to focus on expensive fashion items, which required proximity to court and had higher margins. 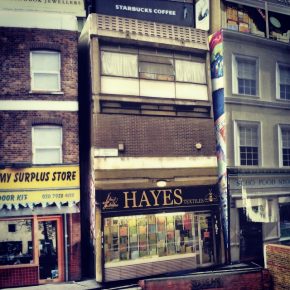 Lee High Road near Lewisham today and this fantastic looking audio shop. I think all the shop fronts portray the character and personality of the shop owner. Lewisham was most...

The Tower of Babel – Shop of the Day 179 One of my favourite shops and a place close to my heart I had my 1st small solo exhibition here in 2004. Opened in...