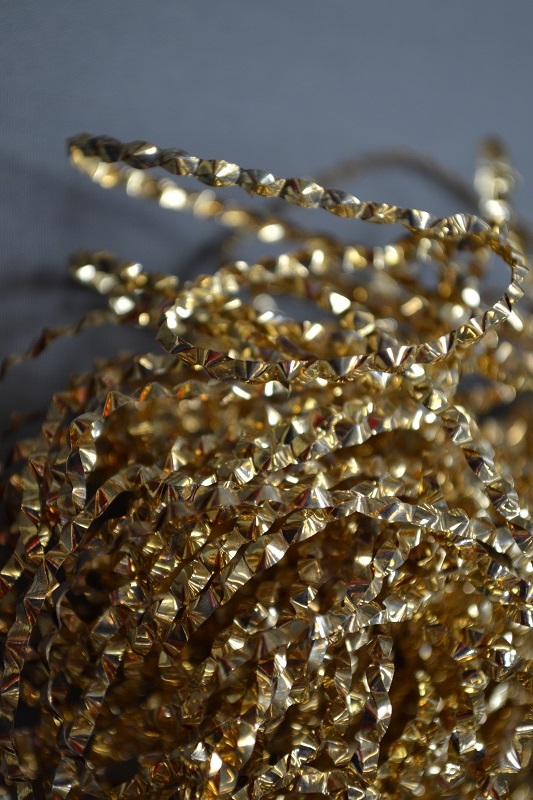 A few weeks ago Rosemary posted a blog about Indian textiles which incorporate metal or metal wrapped threads (April 23, 2015). She was very careful not to mention what the metal was because we have been in the process of analysing the composition, so in this follow up post I will tell you what we have found.

To find out exactly which metals have been used I have been taking the objects to the V&A’s Conservation Science Lab for non-destructive analysis, they use a technique called Energy Dispersive X-ray Fluorescence (or EDXRF) to identify the elements an object is composed of. Dr Lucia Burgio positions the part of the object we want to analyse under the equipment which is housed in a lead-lined room. Once we are safely outside of the room, the object is targeted with high energy photons. The photon beam causes the object to emit X-rays which are recorded and shown on a graph; you can see Lucia pointing this out on the screen. Each element has a distinctive X-ray ‘signature’ which means that we can identify the elements and get information on their relative proportions.

For example the metal strips forming the warp of the golden textile being set up for analysis were found to be primarily silver with small amounts of copper and gold indicating that they are gilded silver. This is not unexpected because most metal threads are composed of more than one metal, it is rare to find pure metals particularly if the thread is ‘gold’; it is much more economical to gild silver.

The silver textile has metal strips in the weft direction, these were analysed and found to be almost pure silver with trace amounts of copper. The results for a child’s dress were more surprising, we were expecting that the main body of the garment would be silver and that there would be some gilding found on the trimming. When the narrow strips of metal were analysed they were both exactly the same, silver and copper but not even a trace of gold! On closer inspection we realised the reason the trim looks golden is due to the bright yellow weft threads used to bind the narrow silver strips together reflecting on the shiny metal. In contrast the main fabric has been woven together with a white thread and looks more silvery.

This tinsel is made from exceptionally fine strips of metal, it is very light in weight and flexible. The analysis showed that very pure silver was the main component but trace amounts of copper, gold and mercury were also found, suggesting that the silver was mercury gilded.

All of the examples discussed so far have been flat strips of metal but metal threads come in many ingenious forms and a selection of 19th century samples will be shown in the exhibition. Below you will find a series of close up images taken under magnification so that you can see how they are made.

Flexible threads are made by wrapping the metal strip around a fibre core, which is often dyed to enhance the colour of the metal similar to the weaving of the fabric for the child’s dress. The gold coloured thread is mainly silver with traces of copper and gold. The silver thread is made from very pure silver with only a trace amount of copper.

These examples show what can be created when two flat strips of metal are folded and crimped together.

You can see how the folded metal strips are used in the detail of an embroidered panel below, along with a variety of other decorations including sequins and pearls.

Another form of metal thread extensively used in this embroidery is called ‘purl’; this is a hollow tube of tightly wound wire which has been stitched down in small sections to the base cloth.

The example below is a wrapped metal thread woven into the border of a contemporary sari recently acquired for the exhibition. The same metals are found but in different proportions to the historic examples shown above. The thread is mainly copper with some silver and a trace of gold, its golden colour is being enhanced by the high copper content.

Although there are many new innovations in the materials being used you can still find factories making the types of threads shown here so look out for ‘All that glitters’ blog part 3 on manufacturing techniques!