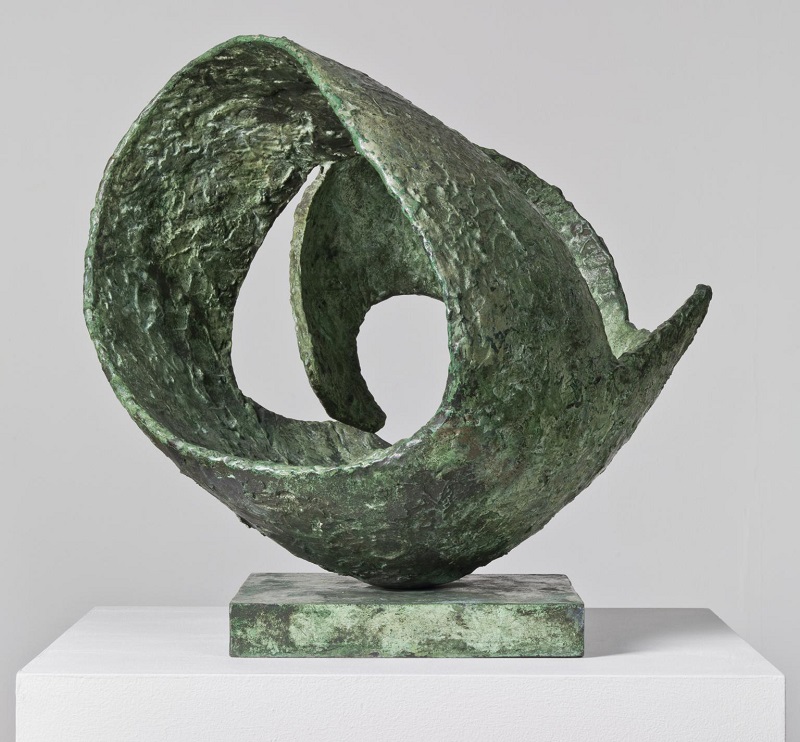 To coincide with the Tate show Barbara Hepworth: Sculpture for a Modern World we look at the sculptor’s Involute II which inspired art students around the UK in the 1960s and 70s.

In 1960 Hepworth’s Involute II was purchased by the V&A Circulation Department which was responsible for sending travelling exhibitions to art schools around the country (Circ.249-1960). The sculpture became part of the show Modern Sculpture, Sculptors’ Drawings etc (with the ‘etc’ in this case appropriately being ‘etc’hings!). Hepworth was in excellent company as the other three modern sculptures were by Kenneth Armitage, Henry Moore, and Kurt Schwitters – all small scale for ease of transport. The original sculptors’ drawings included outstanding examples by Archipenko, Butler, Consagra, Calder, Gaudier, Hoflehner, and Modigliani, together with rare etchings by Arp, Giacometti, Gonzalez, Lipchitz and Marini.

In order to engage art students, Circulation travelling shows needed an appeal that was ‘strictly of the moment’ necessitating a ‘ruthless turnover of material’, as it was put by the Principal of Birmingham College of Art, Meredith Hawes, in 1967.[1] In the 1950s Carol Hogben, Assistant Keeper of Circulation, had negotiated permission for Circulation to keep exhibition charges paid by art schools in order to fund new acquisitions. Negotiating the purchase of these ‘of the moment’ contemporary objects was a delicate process, as correspondence in the V&A Archive reveals. In March 1960 Hogben travelled to St Ives with the aim of buying a Hepworth sculpture for Circulation. After the visit Hepworth wrote from her Trewyn Studio:

Apparently my prices are all just about to be raised. I do not think therefore that I can offer more than the 10%; except perhaps in the case of Involute which is rather more than you intended to pay. (say pounds instead of Guineas)

Notable is Hepworth’s red ink underlining Involute and for ‘say pounds instead of Guineas’ (meaning an additional reduction from 21 to 20 shillings). Involute II did indeed enter Circulation as part of the education of art students around the UK, even though the work was ‘rather more’ than Hogben had hoped to pay. The work was transferred with other 20th century sculptures from the V&A to Tate in 1983 as part of a rationalisation of national collections. 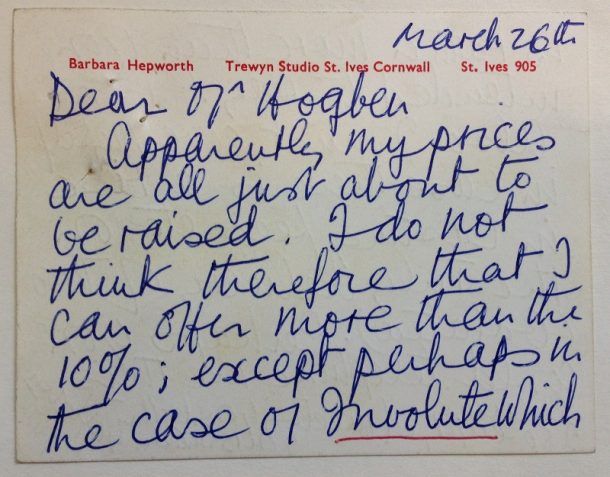