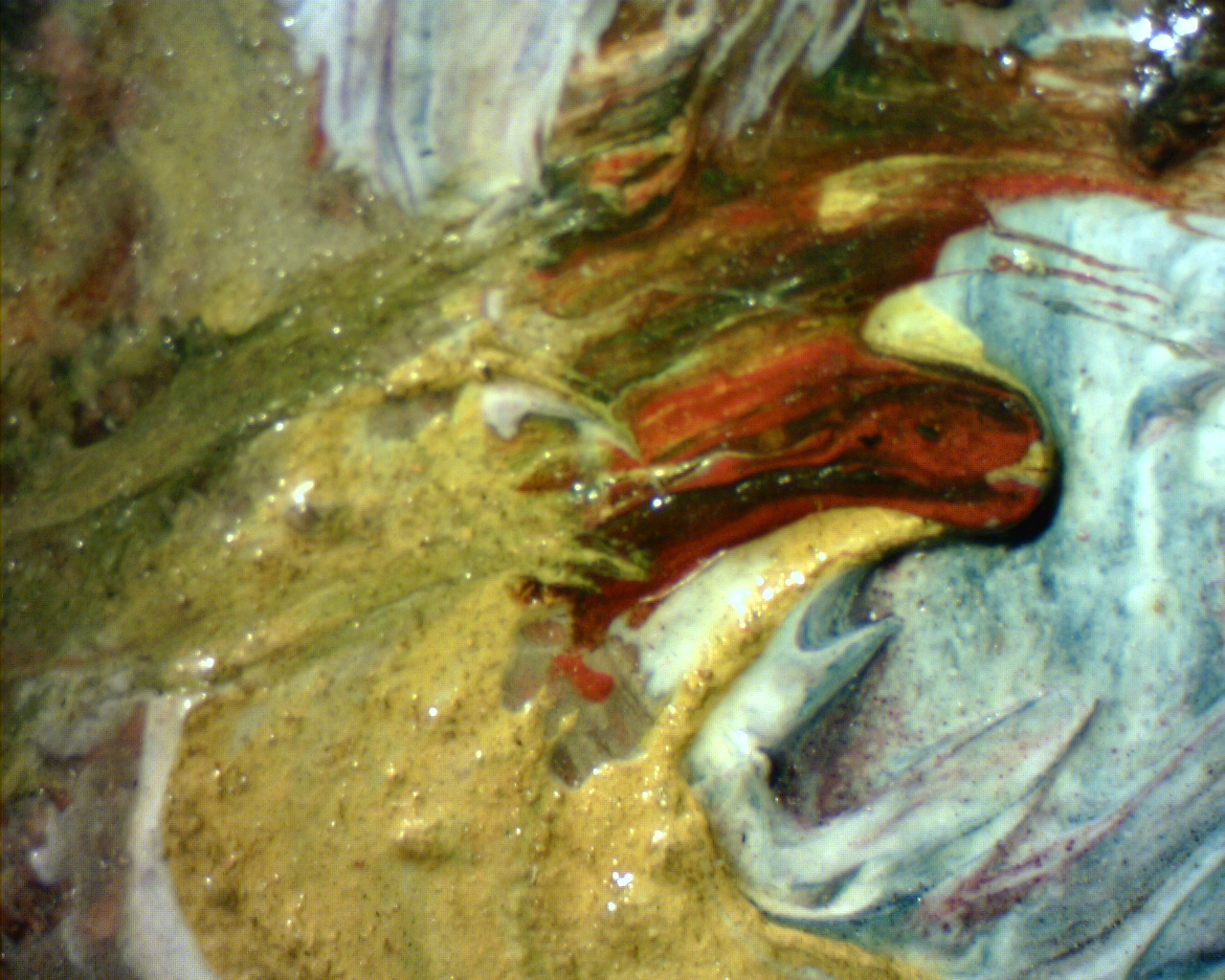 Our dynamic Paintings Conservation interns, Arabella and Morgan have been lucky enough to work on some of our Constable oil sketches this week for the upcoming Constable: Making of a Master exhibition. We’ve posted recently on our discovery of an unknown Constable sketch that was hidden by an old lining, so of course preparing the rest of the sketches for exhibition gave Arabella and Morgan another great opportunity to examine them up close, and find even more hidden secrets…

In preparation for the upcoming Constable exhibition, together with paper conservation we’ve been remounting and reframing a number of the V&A’s oil sketches by Constable. This meant a unique opportunity to examine the sketches out of their frames and mounts. As well as  routine condition checking, we were able to closely study them under the microscope and using other imaging techniques like x-radiography  (we’ll post more on that next time).

Constable painted oil sketches like the scene in Dedham above, usually outdoors. This meant that he could quickly and freely capture the ever-changing light and movement in the landscape. Later in the studio, he could refer back to these sketches as he planned out larger compositions. Constable also sketched small objects and vignettes, using the oil medium to consider subjects simultaneously through form, colour and texture. In these small paintings, which were intended to be impressions and not final works, we can really see Constable’s virtuoso ability to paint wet in wet, or alla prima, creating fresh and spontaneous illustrations of the world around him.

Alla prima (from the Italian, meaning ‘at first attempt’), is a technique where layers of wet paint are applied on top of other layers of wet paint. It is used in both oil and watercolour painting, and it demands a high level of skill since the completed work must be finished in one sitting. The technique allows a much more spontaneous approach to capturing the mood and feel of a subject in oil paint – particularly of in landscape painting – and Constable used it to great effect:

Constables oil sketches are fascinating objects to study individually and in our examination, we discovered a lot of surprises! Here are some of them:

Constable often painted on homemade paper laminates (made from two or three pieces of paper glued and pressed together). Before he painted on the paper, he applied a coloured ground to the entire sheet. We were able to see this using the microscope. The grounds often remain visible across the composition (seen through areas of thin, translucent paint), adding depth and atmosphere to his scenes.

Here is a micro-photograph of the paint surface of a Constable sketch. A loss to the paint layer reveals the pink ground underneath:

Sometimes Constable used a full piece of paper for one sketch, and other times he cut sheets into smaller sections.  On the back of one full sketch, Study of Poppies, a full sheet, we can even see how he planned out the ways he might divide a full sheet of paper.

The presence of these drawings on the backs of the sketches were known, of course, to Constable scholars. However, in our study we discovered two sketches that we could show originally came from the same piece of paper.  Not only did the paper match when we looked at the reverse, but both sketches had the same ground colour and were dated to within eight days of each other. Finally, we could place the sheets side by side, and show that the two edges fitted together perfectly, as you can see:

One of the most exciting things about examining the unframed Constable sketches was discovering unlikely surprises on the back. On the back of the sketch below, Constable describes the scene he is painting, noting the Very lovely evening—looking Eastward—cliffs (and) light off a dark grey sky –effect-background-very white and golden light. There is also the beginning of a note to his great friend, John Fisher, writing that that day had been his daughter’s birthday:

On the back of another drawing, we found what appeared to be a child’s drawing in white chalk. Could Constable have let his children sketch alongside him??

Looking at the sketches under the microscope allowed us to appreciate Constable’s alla prima technique. Swirls of colour demonstrate how he mixed the paints on the paper while sketching, blending one colour into the next, to create a fresh, spontaneous effect:

See the oil sketches in person, when they are displayed as part of Constable: Making of a Master, which opens at the V&A on September 20th.

Please explain further the “colored ground” on the laminated paper Constable used for his oil sketches. Is there a sizing on the paper or just the ground. What is the ground, a layer of oil paint. Is it diluted?
Many thanks, as these are among my very favorite paintings in the world.,
Gail Buxton