As promised in my previous blog, it’s time to show you what very sophisticated scientific analysis techniques (and the even more sophisticated brains of the scientists using them) can reveal about our Leman objects.

The V&A has a small team of scientists who deliver expert advice and services to the Museum, and take care of the collections in partnership with conservators and curators. One of the functions of the V&A scientists is to analyse the Museum’s objects and find out more about the way they have been made and the materials that have been used to make them.

The V&A Science Section has a number of pieces of scientific equipment we use for this purpose, but there are techniques we do not have available: to get access to these we usually establish collaborations with colleagues within the UK and in the rest of the world. In this instance, we asked for the assistance of Maarten van Bommel, Professor of Conservation Science at the University of Amsterdam: one of his specialisms is the analysis and identification of natural organic dyes, usually extracted from plants or insects.

The Leman silk is brocaded in two different shades of green and two of pink, as well as white, blue and cream, on a pink ground. 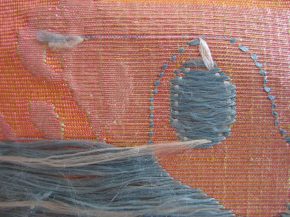 Most of the threads used are still firmly woven into the object, but there are a few loose ends on the reverse of the silk. 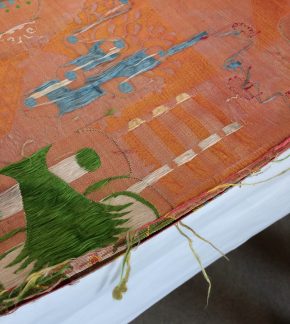 Tiny samples of these could be removed, and were sent to Amsterdam for analysis by Ultra High Performance Liquid Chromatography.

The samples were of as many colours as we could get access to.

Many traditional dyes were identified: indigo for the blues, cochineal and annatto for the crimson, safflower for the pinks, weld (with of without annatto) for the yellows, and a mixture of indigo and weld for the greens. 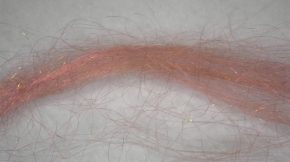 We were very pleased that indigo and cochineal were detected, because they are very resilient and don’t fade very easily. Weld is not too bad either, but annatto and safflower are very light sensitive: we must be mindful of how much light we expose our silk to…

Otherwise we’ll risk that its beautiful colours will fade!

The results of the dye analysis paint a nice picture of the trade links that London, or at least the dyers which provided coloured silk yarns to the weavers of Spitalfields (where James Leman lived and worked), had with the rest of the world: weld was likely cultivated in Europe, indigo could have originated from both Asia and South America, cochineal was definitely from South America and safflower was originally from the near East. Annatto was originally from South America, but its cultivation had already spread to Southern Europe well before Leman was active.

Leman worked in a very well connected and cosmopolitan reality!