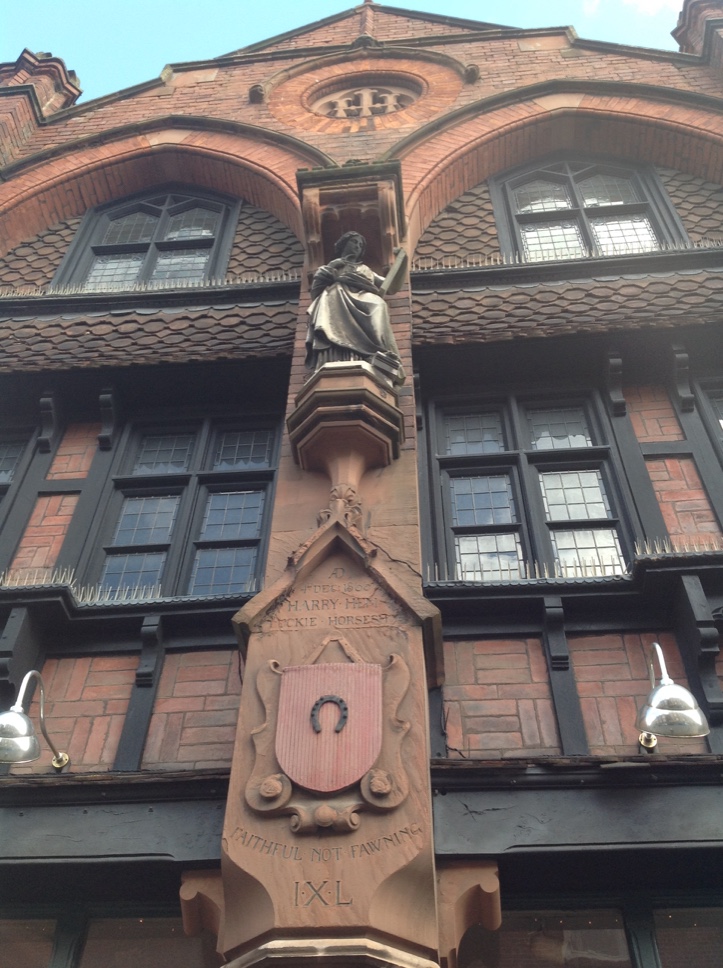 While moving a store of photographs recently here at the V&A, I came across rather an intriguing character. What led me to him was a box of 19th century photographs of ecclesiastical carvings; we have many hundreds of photographs of woodwork and stonework from religious buildings from around the world in the collection, but what caught my eye with these was that despite being in a traditional style, instead of seeing worn and darkened carvings in a church, I was seeing newly made objects displayed in a workshop…

Also in the box with the photographs was a photocopy of an article from ‘The Modern Carpenter, Joiner and Cabinet Maker’ dated 1903, by one Harry Hems of Exeter, which began to make it clear who made these and why. The author begins ‘In my opinion there does not exist a more conceited set of men than figure-carvers’ and the tone remains as bombastic throughout, though also displaying a craftsman’s knowledge and love of carving, and a strong religious feeling.

A bit more digging revealed that Harry Hems was a master sculptor and carver based in Exeter. He’d been born in Islington, in 1842, the son of an ironmonger and cutler, and after serving an apprenticeship to a wood-carver in Sheffield, he then sought inspiration in Italy. His travels appear to have ended badly, and he returned to England with no money. He managed to find work in the building of the Royal Albert Memorial Museum in Exeter, and clearly felt at home in Devon. According to his own legend, he found a ‘lucky’ horseshoe on his way from Exeter railway station, which he took to be a good omen, settling in Exeter in 1868. He married, and founded his company ‘The Ecclesiastical Art Works’.

His company soon flourished, and at its peak employed over a hundred men. By the 1880’s he had outgrown his original workshop, and had commissioned a new building from architect Robert Medley Fulford, sited in Longbrook Street, Exeter, which he called ‘Ye Luckie Horseshoe Studio’. This building still stands, and as I was in Exeter recently, I went to have a look:

His motto “Faithful Not Fawning’, along with the lucky horseshoe, is above the door:

At least some of the photographs of works by his firm have clearly been taken outside this building. You can see the front windows and central pillar of the workshop frontage here behind these oak stalls:

“Faithful not fawning” clearly reflects his strong views on restoration, in particular his aim to merge historical elements harmoniously to make new but historically rooted objects. As a practitioner of the Gothic Revival style, he was deeply inspired by medieval woodwork (which Devon churches are particularly rich in). He acquired a large collection of original medieval carving through his work, which he displayed in the workshop as inspiration to his craftsmen. This collection is now part of the Royal Albert Memorial Museum (now known as RAMM), and is noted as being of national importance.

Much of his restoration work would probably now be considered over-eager, if not drastic, but given the period he lived in this perhaps is to be expected. Notions of preservation have come a long way since his time! Whatever view you take on the work of his studio and whether his work lived up to his motto, his act to save and collect original medieval examples has certainly been a gift to us today.

Reading more about his life and character, it his hard to imagine him being ‘fawning’ about anything – he was known as an extrovert, a relentless self-promoter (perhaps explaining these photographs to advertise his work), and a workaholic. He was fined for fighting with his employees, and also avoiding tax. In a forced auction of his goods due to unpaid tax one of the lots included was a life-sized statue of St. Matthew the Tax Gatherer, and in another (where he prepared the auction catalogue himself) lots included the crowbar bailiffs had used to gain entry to his building, and some tombstones “suitable for the graves of Income Tax Commissioners or other Revenue Officials”. He also eccentrically christened one of his sons ‘Lord Archibald’.

In contrast to this less than virtuous side, however, he was also a church warden, a city councillor, a supporter of local hospitals, and benefactor of the poor, for many years holding a Christmas lunch in his workshop for local elderly people who had fallen on hard times.

His work still exists in churches and other buildings around the world, and I’ve only had a chance here to touch on his life; many sources exist to give more detail about the man and his work, notably the following:

An interesting further insight into this gifted man. He came to my attention while researching a book I am writing on St Bartholomew’s Parish Church, Crewkerne – which has some very fine work, including a reredos by Hems as well as a perpendicular tower vault. It could be there is more.

Incidentally we are regular visitors to your Museum, would it be possible to view any of these photographs or indeed works sometime?