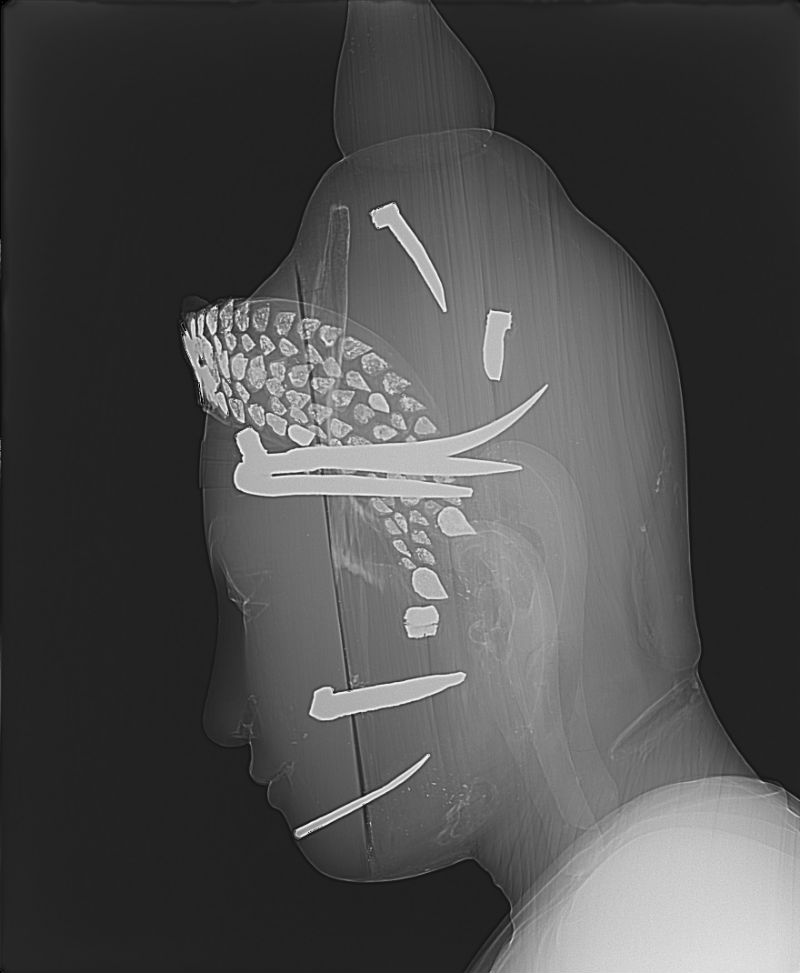 Here in the sculpture conservation studio, we have recently begun the treatment of an 18th to early 19th century standing figure of the Buddha. It came originally from the Kyaik Than Lan pagoda in Moulmein, Burma. It depicts the Buddha standing on a lotus bud, in a compassionate position, and the whole stands on an elaborate octagonal base. This will be part of the new display for The Robert H. N. Ho Family Foundation Galleries of Buddhist Art due to open very soon at the V&A.

We knew very little about this type of Burmese sculpture, so we took some time to study the materials and techniques that had been used in its creation and how they relate to its condition.

It’s impossible to know by eye how many different pieces of wood make up the sculpture, so we took some X-ray photographs of the figure so we could visualise its internal structure. The results were unexpected: we were surprised to find that the sculpture and base were actually made all of one piece of wood, with the face made from a separate more dense wood held in place like a mask with a few nails. We also found several big but discreet metal staples set in to stabilise a big crack that runs from the top of the head across the entire figure. It’s not clear whether these are original or form part of a later repair.

The surface is lacquered and gilded with decoration in the head and the base of inlayed coloured glass and mirror work. This is a traditional Burmese technique called hman-zi shwei-cha, in which coloured glass and mirror fragments are cut into different shapes, and inlayed on the surface with a lacquer called thayo (a resin from a local tree mixed with animal ashes and rice husks). The lacquer has a sticky surface when applied, so it also acts as an adhesive for the gold-leaf.

To help us understand better the original technique we have taken tiny samples to analyse the lacquer layers and to see a cross-section of these surfaces. If the cross-section shows more than one layer of lacquer this may tell us about subsequent repair or restoration.

Using a binocular microscope we could see at high magnification the condition of the lacquer layer and the glass and mirror decoration. The surface of the coloured glass fragments are covered in little dots and scratches known as pitting, which is triggered by high levels of humidity.

Further degradation is also visible on the mirrors where the tin and mercury that form the foil on the back have separated. Little droplets of mercury can be seen behind the mirror glass. We took care to ensure that the mirrors were well secured in place to avoid the hazardous mercury leaching out. For further protection we will be displaying the figure within a case.

Some of the mirror pieces and the coloured glass are cracked and others are lost, which has also caused some losses to the thayo lacquer relief.

Although the lacquer layer seems stable, under the microscope we could see micro cracks. These are a typical degradation on oriental lacquer, and can affect its future stability.

When lit by ultraviolet light, the surface glows with different colours depending on what is found: yellow areas show lacquer that has been exposed by the loss of its gilding, while a dark purple shows the areas covered by wax and dirt. These areas were very noticeable on the surface of the figure, giving it an unbalanced overall appearance.

Now that we understand better the object and its condition we can start planning the conservation treatment. We’re still waiting for the results of some of the scientific analysis but we know enough to carry out some cleaning and consolidation tests. Lacquered surfaces are very delicate and highly sensitive to certain solvents, which makes cleaning very challenging. We’ve started trialling different methods and materials, in particular to clean the surface and remove the brown stains. We’ve found that we could successfully use water-based gels applied over Japanese tissue: the wax creates a barrier layer protecting the lacquer and the gilding from the water. We have decided not to remove the wax as it is very ingrained in the original lacquer and any attempts at removal could alter this delicate layer.

The application over Japanese tissue is timed carefully to achieve the result desired without over cleaning. Once the gel is removed, the area is rinsed using small cotton swabs removing the softened dirt in a controlled manner.

We hope to recover the lost splendour of this magnificent Buddha figure as much as we can. As an example of Burmese craftsmanship it is unique in the V&A’s collection.

Wow, if we see how the Buddha statue are crafted and constructed, it won’t show much techniques in normal eyes but in reality the Burmese craftsmen must have done quite amazing work on the statues with much expertise.

The surface is lacquered
and gilded with decoration
in the head and the base of
inlayed coloured glass and mirror work.
Buddha statue
Thank you.

The ancient carvings were really astonishing. I am still trying to find a video where a lavastone buddha is crafted. If anybody has it, please help me with the link.