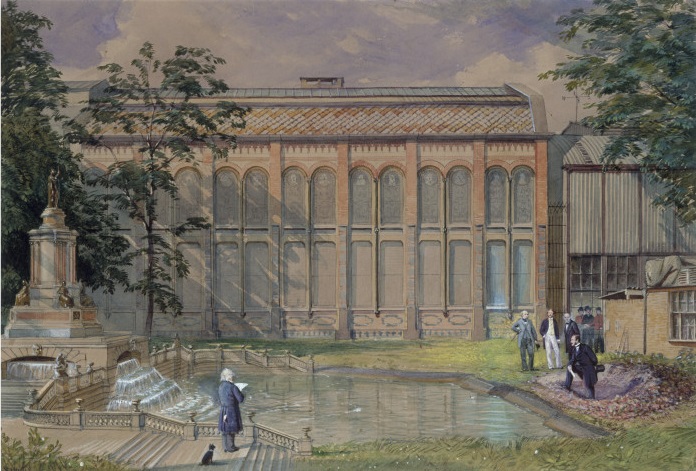 As I was flicking through a copy of Elizabeth Bonython’s King Cole: A picture portrait of Sir Henry Cole, KCB 1808-1882 this attractive watercolour caught my eye:

Bonython explains that it shows the quadrangle of the South Kensington Museum (as the V&A was known until 1899) in March 1861. Against the backdrop of the Sheepshanks Gallery, the Prince Consort inspects a half-scale model of the memorial to the Great Exhibition of 1851 as Colonel Grey, Francis Fowke and Sydney Smirke look on. Henry Cole, the Museum’s first director, stands in the foreground consulting what may be the design for the memorial.

I’m not convinced, however, that this al fresco meeting took place in March. Although Cole’s diary entry for 15 March records ‘Pr. afterwards came to Museum to see Model of ye bandhouse and Sketches for ye Fountain: resolved that Durham’s model shd be sent & fitted up with ye Water works’, no subsequent entries for this month mention a formal inspection of the model and its functioning water cascade. More promising is this entry for 19 April, which brings together most of the protagonists featured in the watercolour: ‘Quadrangle: HRH came to Gardens. Smirke directed to alter the Archway wh: was too low in the South Garden to a flat bridge as designed by Fowke. All came to see the cascade experiments in the Mus: Grounds & all approved of them. Durham quite content’.

What caught my eye about this watercolour, however, wasn’t so much the distinguished historical personages, or the statue of Britannia, complete with burbling water feature, but the small black dog sitting patiently (dutifully?) behind his master, resisting his canine instinct to leap into that rather inviting pond. 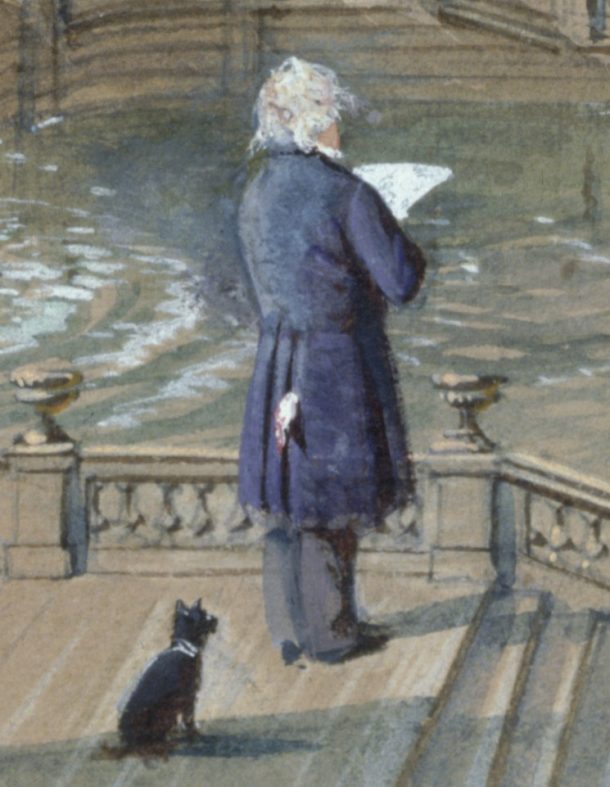 I missed this image when researching my blog Pet Cemetery: Henry Cole, Jim, Tycho and Pickle so I am pleased to be able to add another pet portrait to the album. ‘Henry Cole and Tycho are in the foreground’, Bonython observes. But can this really be Tycho?

There are three arguments against identifying this pooch with Tycho: (1) Cole’s diary proves that he belonged to Cole’s son Alan, although Cole is known on occasion to have taken him walkies; (2) there are no other surviving depictions of Tycho, of which I am aware, to corroborate Bonython’s claim; and (3), perhaps the clincher, if Tycho is depicted in this watercolour, then he would have been an impressive aged 24 at the time of his death in 1875. While not impossible, his longevity would have ranked him 8th or 9th on the Guinness World Records’ list of the oldest verified dogs.

If not Tycho then, could the dog be Jim, Cole’s Yorkshire terrier, who was memorably depicted – with front legs of somewhat dubious anatomical correctness and showing more than a passing facial resemblance to an Ewok – in an issue of Vanity Fair? 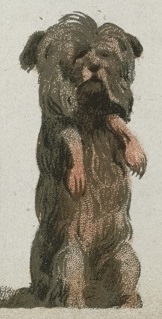 I’m not so sure. According to his memorial in the V&A garden, Jim died in 1879 aged 15. This seems consistent with his first documented appearance in Cole’s diary in 1863. Assuming the information on the memorial is correct, however, it would be stretching it to believe that Jim was alive in March 1861. Consequently, could our furry friend be an unrecorded Cole family pet? Or was Jim actually a couple of years older than Cole remembered? Or is the dog in fact a cat?!