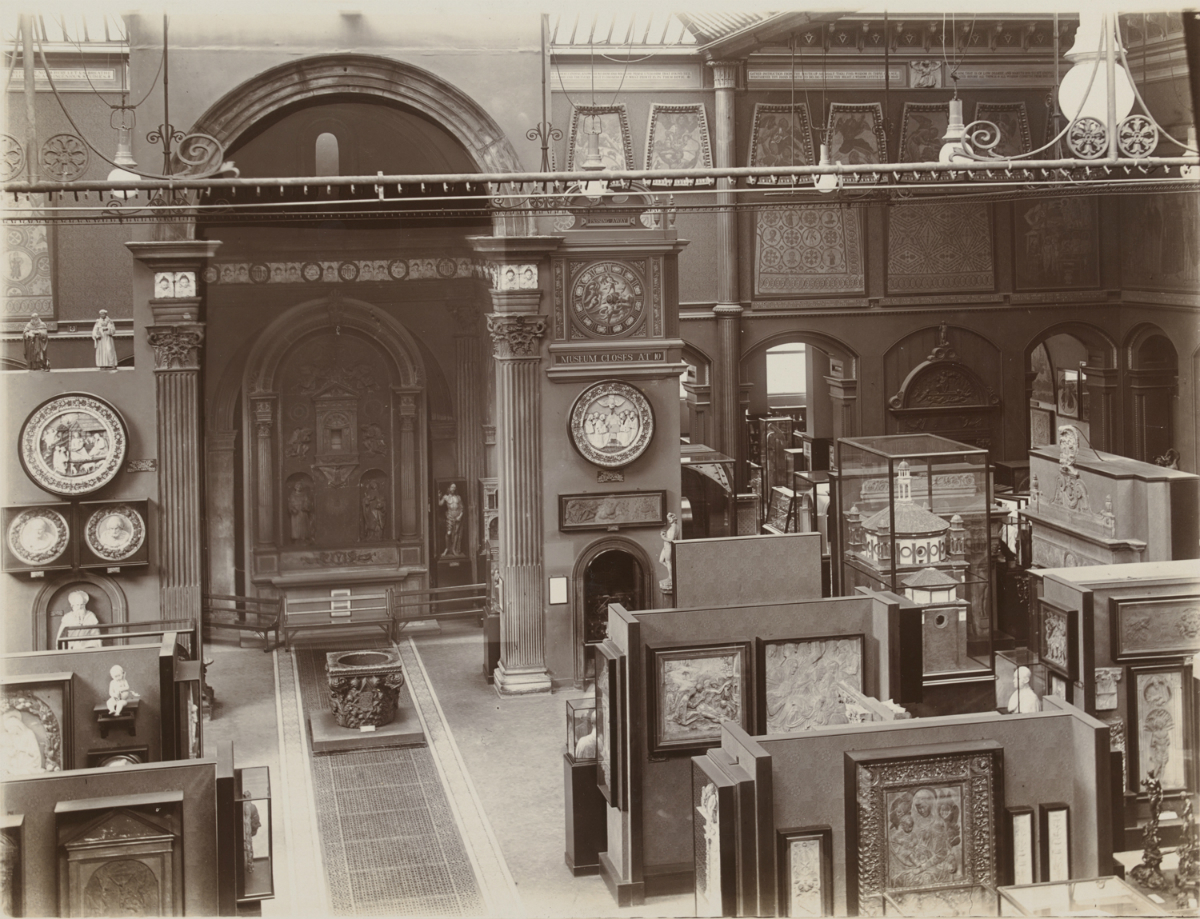 Something caught my eye in this old photograph of the V&A’s North Court taken in the late 19th century: 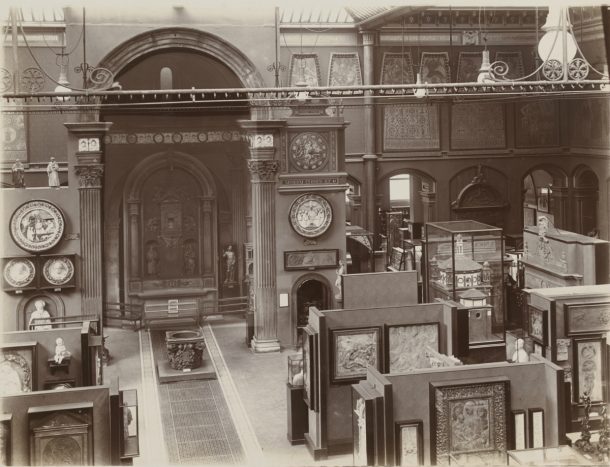 You may not recognise this space but you’ll have been in it if you’ve seen any of the V&A’s headline exhibitions over the years. The space has been boxed in and used for exhibitions since the 1950s, but as one of the earliest galleries it was an important space for displaying the Museum’s burgeoning art collection. In the photo you can see a typical Victorian clutter of objects, with some important objects visible that have since moved elsewhere in the Museum, such as the chancel chapel from Church of Santa Chiara, Florence, now the focal point of eastern end of The Renaissance City 1350–1600 gallery in the Medieval and Renaissance Galleries

So what caught my eye? Behind the array of alabasters and majolica I was interested in a pattern on the display stands. Here’s a detail of the photo:

What is this pattern, I wondered? With a bit of digging I found it is ‘Marigold’ pattern wallpaper designed by William Morris and first produced in 1875. Morris’ involvement in the development of the Museum’s collections is well known, as is the restaurant room Morris’s firm Morris & Co. designed, known as the Morris Room or the Green Dining Room, which is still in use today.

Is it possible that he was involved in choosing one of his own wallpapers for the display stands? And what colour was the paper? All I could tell from the photograph is that it is a dark colour variant of the paper. Looking for evidence in the V&A Archive of Morris’ involvement I was delighted to discover two samples of ‘Marigold’ wallpaper in one of a series of files entitled ‘Alterations, decorations and repairs to Museum premises.’

One sample has ‘this pattern’ written on the back, the other ‘Colour made with ochres’. Disappointingly the samples are contained in papers relating to decorating the Sheepshanks Paintings Gallery in 1893 and not the North Court. Interestingly the Museum’s Director for Art Thomas Armstrong, thinking it ‘desirable to have a pattern on the walls on which the pictures are hung,’ did not care for the paper’s colour, commenting that it was ‘a little too bright.’

Jeffreys & Co. Paper Staining Works, Islington, were commissioned to produce a bespoke colour, with Messrs. Morris and Co.’s permission, in ‘ochres only and ochres distressed with Vandyke Brown.’ The ground of the bespoke pattern was made on Saturday, 11th November 1893, the pattern printed on Monday and presented to Armstrong for approval on Tuesday.

The paper chosen was made up of ochres only and a note from Tuesday, 12th December confirms ‘the paper is now being put on the walls.’ Here’s a photograph from 1914 of Room 99, one of the five Sheepshanks paintings galleries, showing the wallpaper on the walls. Room 99 was also called the Constable Room as it contained the Museum’s collection of John Constable‘s paintings bequeathed to the Museum by his daughter Isabel Constable. Some of his works are visible in the image, such as his painting Dedham Lock and Mill on the right-hand side. 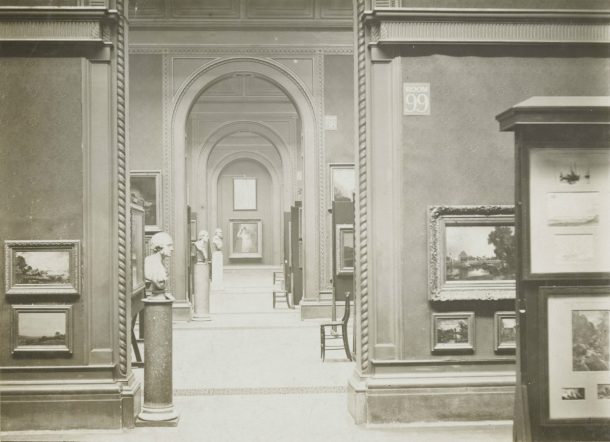 All very interesting but I’ve not been able to get any closer to discovering if Morris was involved in choosing the paper for the display stands in the North Court and when the paper was put up there. Trawling through further images of the North Court another Morris wallpaper suddenly appeared, this one called ‘Scroll’, and this time it was used on the Court’s walls. In this image from 1905 I love that Morris’ design is aggressively competing for our attention with the French cupboard‘s engraved pewter, brass and clear horn marquetry. Which one wins, I wonder? 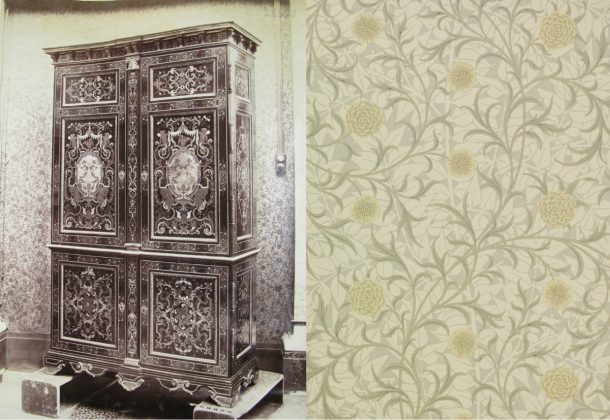 As I looked through more images of the North Court I found that a variety of wallpapers was being used there in the late 19th century. Here are two further images showing a sprig pattern surrounding the chapel doorway carved by Giovanni Gaggini and a trellis and lion pattern above the courtyard window from Chateau de Montal. Both objects are now in the Medieval and Renaissance Galleries in rather more austere settings! If you know who produced these papers please let me know in the comments section below. 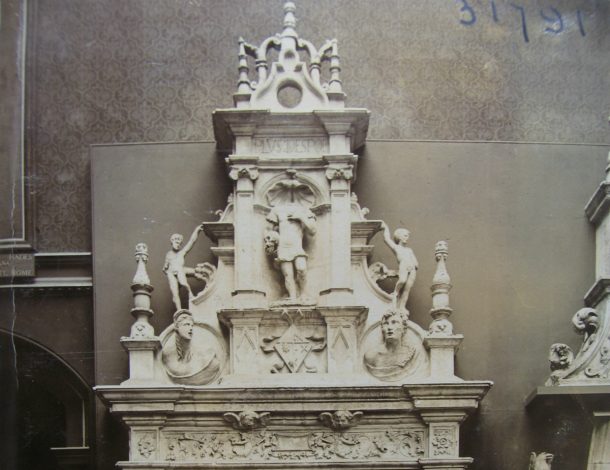 Today we’re accustomed to museums and galleries being deliberately plain, almost sterile spaces to highlight the objects on display. This was not the case in the nineteenth century and many of the South Kensington Museum (now V&A) galleries and rooms were highly decorated and seen as artworks in their own right, such as the original Ceramics Galleries (now the Whiteley Silver Galleries). Even though the North Court’s decorative scheme was relatively restrained by comparison with other spaces in the Museum, the wallpaper certainly added to the ‘visual noise’ that we tend to associate with Victorian interiors.

When Sir Aston Webb‘s new galleries along Cromwell Road were unveiled in 1909 their decoration reflected the change in taste away from the exuberance of the older galleries, with only a few accent details in the plasterwork and marble skirting boards. Compared with the highly decorated Victorian spaces these were thought shockingly bare, like ‘some immense, finely-appointed modern hospital for the analysis and dissection of applied art,’ said the Wallace Museum’s Director Sir Claude Phillips when he saw them.[1] Here’s the Central Court soon after it had opened and you can see how plain it looks by comparison:

The V&A’s galleries are now a glorious mix of Webb’s stark galleries and the restored high-Victorian settings. Which do you prefer: the ‘nakedness of the gaunt [new] galleries, [which] too much resemble Metropolitan railway stations’ (Phillips again) or the nineteenth century floridly decorated settings? Let me know which you prefer in the comments section!

Ps. Two volumes of original printings of Morris’ wallpapers were given to the Museum in 1919 by Morris and Co. and both ‘Marigold’ and ‘Scroll’ are represented. From 1909 onwards until Sir Roy Strong became the Director there was a steady erosion of the Museum’s Victorian decorative schemes. I find it ironic that examples of the very wallpapers used in the Victorian spaces were added to Museum’s object collection so soon after they’d been ripped off the walls of the North Court!