Not everything in the Prints, Drawings and Paintings collection is printed, drawn, or painted. This post showcases a few of the exceptions to the rule. One of the most popular alternative image-making techniques was cut-paper work. In the eighteenth century, cut-paper pictures were called “shades”, or “profiles” if they were portraits. Although neither term has endured in common usage, cut-paper portraits are now usually called ‘silhouettes’. Below is an example of a 1820s cut-paper picture depicting a family group in silhouette, although as it lacks distinct likenesses, it is probably more technically a ‘shade’. 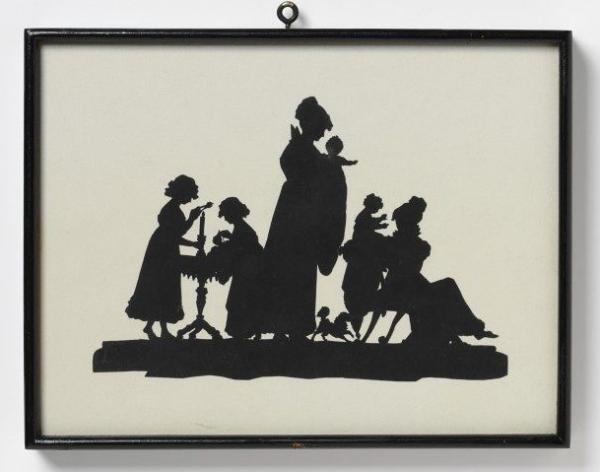 Given by the Hon. Frances M. Talbot.

However, many examples of cut-paper work are definitely not silhouettes, such as this ‘shade’ showing the Lord’s Prayer in an elaborately cut frame, thought to have been made by a child in 1786. 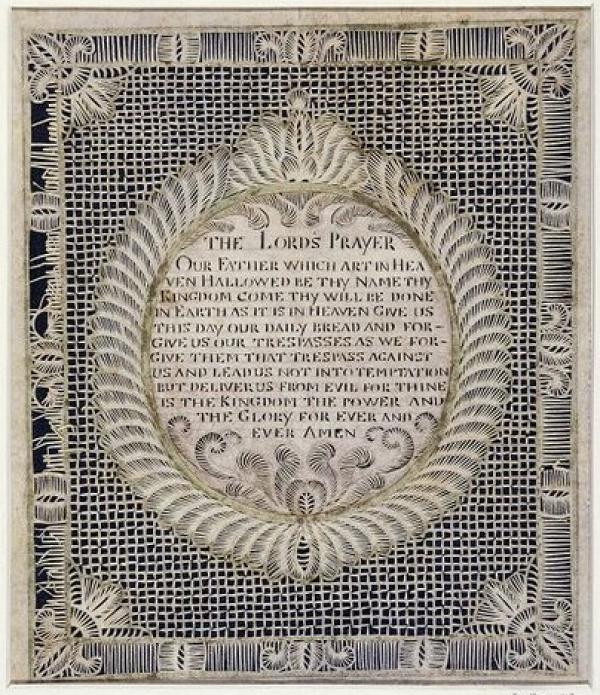 Given by H.M. Queen Mary.

On our records this shade is called a ‘papercut’, a term more commonly applied to Chinese and Far Eastern versions of this craft. The Asia Collections have a large and diverse group of spectacularly coloured Chinese papercuts which can be seen here.

One of the oldest shades in the V&A is this 1707 cut-paper picture by the seventeen-year-old Anna Maria Garthwaite (who went on to be one of the great British silk designers of the eighteenth century). It also illustrates another image-creating technique that is neither printed, drawn nor painted – collage. Before cutting out the paper, it was hand-coloured, and Anna Maria used slivers of the brown reverse of the paper to add extra texture to tree branches, autumnal leaves, roofs and flower beds. To make the detail clearer, the cut paper is laid on a sheet of pure white vellum. 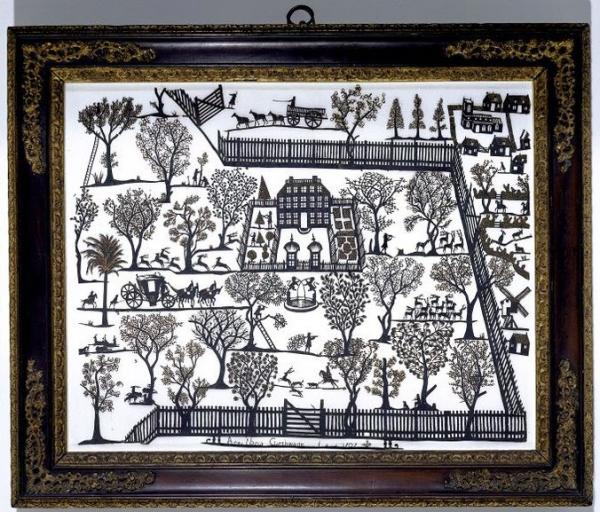 The most exceptional cut-paper picture in the Museum is actually part of the Furniture and Woodwork collections as its mount was originally a screen. Made by the London-based Irish professional paper-cut artist Nathaniel Bermingham, it commemorates the death of Frederick, Prince of Wales and shows Britannia mourning over a portrait medallion of the deceased. The image, at first glance, looks like a line-engraving, but every fine line is actually cut out of the sheet of paper. Some of the detail on the portrait medallion was created by pricking the paper with a pin. Bermingham advertised in 1740 that he could obtain exact likenesses ‘with all the shades of the face without the help of colours’. 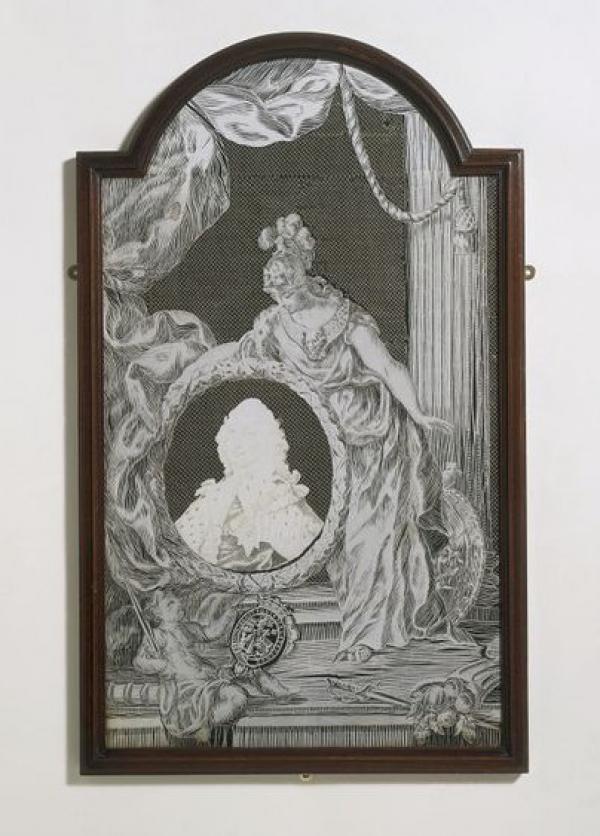 Given by  Mrs. Vanda Howden.

As with cut-paper pictures, pin-pricking was a popular hobby which endured into the nineteenth century. This pin-prick picture by an amateur artist, shows a smartly dressed man with a chair. Again, it is neither a print or a drawing, although was probably copied after a pre-existing image. 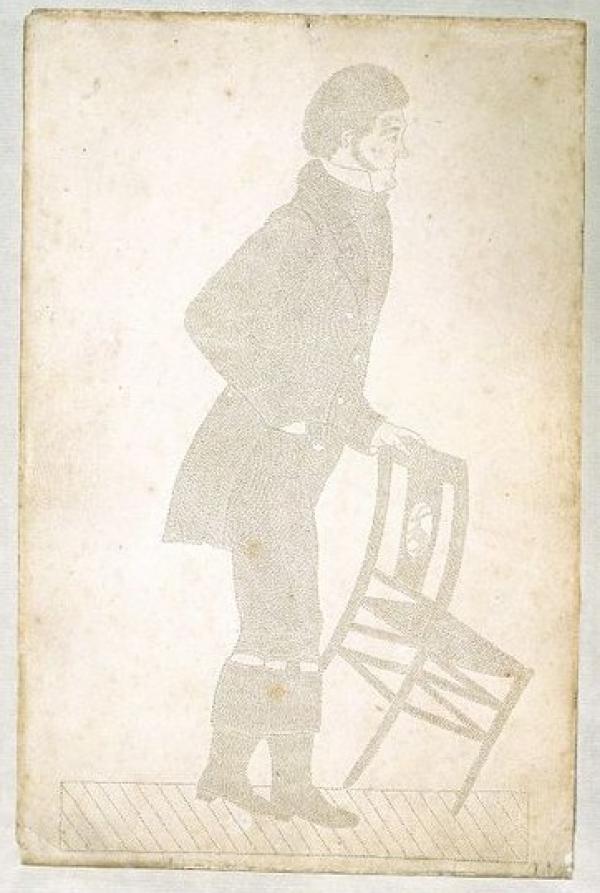 Given by  Mrs. E. Bardsley.

A possibly unexpected aspect of the Paintings, Drawings and Prints collections is a tiny group of plant material, which, at first glance, might seem more appropriately housed by our neighbours across the road, the Natural History Museum. It includes pressed flowers, late Victorian doilies made from pressed ferns and tree-bark, and this 1830s maple leaf. The dehydrated leaf has been pricked through to create a shade, suspended in the fragile network of the skeletonized veins, showing people observing a hot-air balloon ascent. This intriguing, exceptionally frail object, while neither painting nor print, and not quite a drawing, and difficult to place in context, is a fascinating piece of 180-year old ephemera. 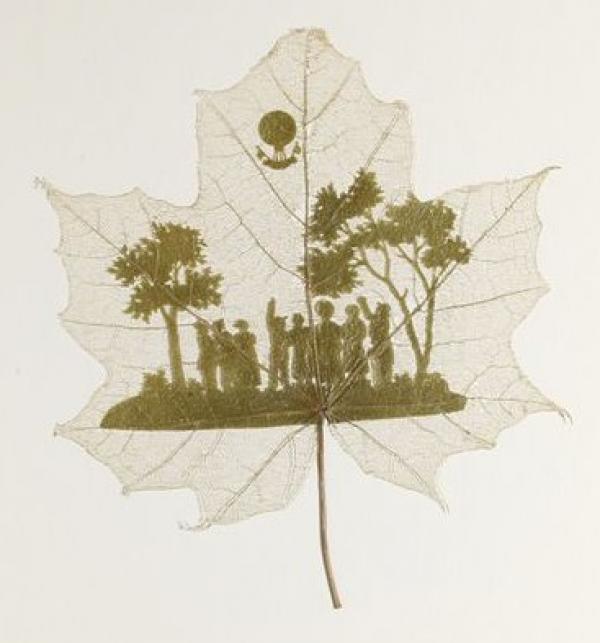 Given by  Mrs. Stafford Gresley.

Currently I’m looking to appraise a collection of Chinese paper cuttings that was left me by my grand mother. She was raised in China and this book is dated 1932. It is detailed with over 40 hand cut pictures. Some color of silk. Where might I find a reputable source of information. This is for insurance purposes. But potentially to sell at auction.

Very helpful account and I had seen some images made out of pin pricking, I also pin pricked my ex-girlfriend’s photograph for walking out on me.
I am studying art and would you refer me to some more resource material. I will definitely add your site as well . Thank you