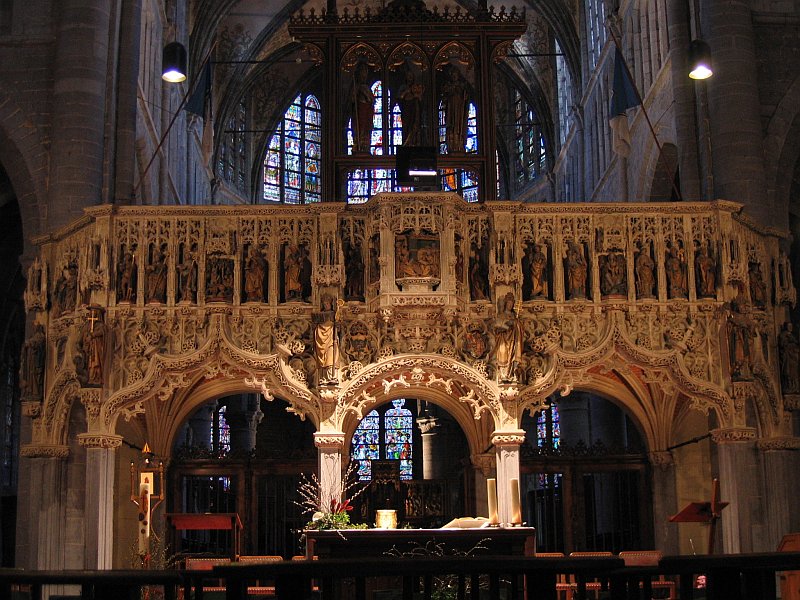 As part of my third year in the Winterthur/University of Delaware Program in Art Conservation, I had the opportunity of a placement in the Sculpture Conservation Studio at the V&A. Working under the supervision of Sculpture Conservator Victor Borges, fellow placement student Ona Curto Graupera (from the City & Guilds of London Art School Program) and I documented and treated a plaster cast of a section of the rood screen of the Basilica of St. Materne in Walcourt, Belgium.

The original object in Belgium was made in 1531.

The V&A also has in its archives letters sent between the Museum and Brussels, discussing the shipment of the cast in 1901. The letters even include a diagram showing how the cast should be installed on the wall. The same installation system and brackets are still in use today.

As part of the ongoing Cast Courts conservation project, this object was de-installed from the galleries. It consists of seventeen pieces interlocking like a puzzle and dry mounted onto a wood board, held in place with metal brackets.

Every part was carefully numbered as it came down including the different metal brackets. It was very important to draw a template with the location of the fixings and the profile of the object to be used during the re-installation in the galleries.

Each part was then photographed, examined, and treated. The object had a thick layer of dirt, and had been damaged by water in the past. Plaster is very porous and difficult to treat but this cast showed a very heavily sealed surface which allowed for the surface to be cleaned with dense, slightly damp sponges. Consolidation of certain areas showing flaking coating and powdery plaster was also needed, mainly due to water damage. Each piece was checked to make sure it was structurally stable.

The manufacture methods of the pieces were investigated visually. Understanding the structure of the object is necessary to assess its stability and make proper decisions about the treatment. There are some visible mould seam lines, and in some areas there is hessian and metal showing through at the surface. Metal bars are also visible from the backs of many of the pieces. We wanted to know how the metal armature was constructed, so x-radiography was performed by Paul Robins on a couple of the pieces.

The x-radiographs of the lowest piece of the cast revealed metal supports, as well as metal wire (the bolder white lines in the Xray image) running through much of the more delicate decoration.

Treatment of the object is complete, and it is now being reinstalled in the Cast Courts, which fully reopen to the public this December.