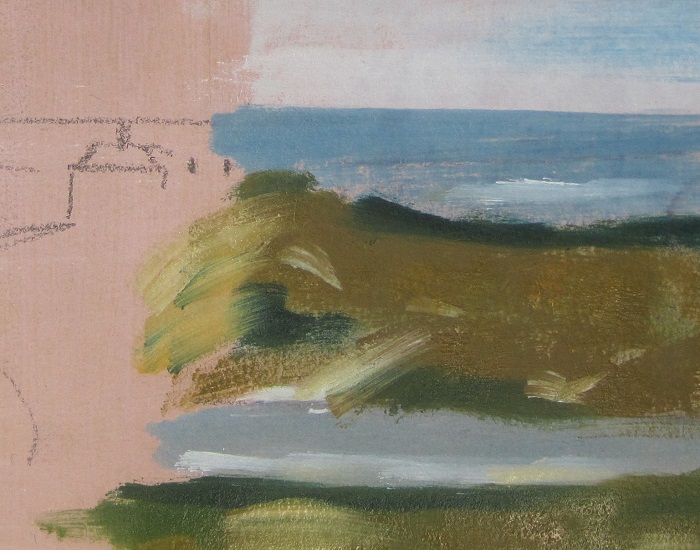 Having prepared some Constable style paper boards with Sophie Connor a little while back (read about it here), I faced the daunting prospect of trying to paint like Constable. To try to make this a bit easier I based my sketch on a painting by Constable that I had recently examined, Buildings on Rising Ground near Hampstead. I admit that I chose this picture because it is a fairly rare example where we can see Constable using drawing, and I knew I would certainly need some drawing to help me!

I used a pencil to do my drawing, and I tried to keep to the lines that we can see Constable used for his picture. I deliberately left a strip of drawing and pink priming visible and then started the oil painting. Constable’s sketches are painted quickly and directly in front of the motif, with his paper boards pinned to the lid of his sketch box. I cheated and left my paper taped to the board that we had used to prepare it.  Constable marked the time and date on the back of some of his sketches, so we know that he could complete a work in as little as an hour.

I copied my painting from Constable’s sketch and began by grinding some Prussian blue and white pigments in oil to paint the sky. Immediately I could see that capturing Constable’s effects is much harder than it looks! He uses the paint quite dry, and drags it across the texture of the paper. I was surprised to discover that the glue ground on the paper is not terribly absorbent and the paint moves fluidly over the surface. I left the priming visible as part of the sky effect.

To paint the foreground I wanted to get some more texture and the dry, dragging paint effects. I left the oil paint mixed on my palette to dry out a bit before using it and then I got much more Constable-like results. I was also pleased that I managed some wet-in-wet mixing using neat colours that I dragged together with the brush.

I was interested to see that while the paper stayed flat as I was painting, as it dried, it developed the cockled surface that we find on lots of Constable’s sketches.