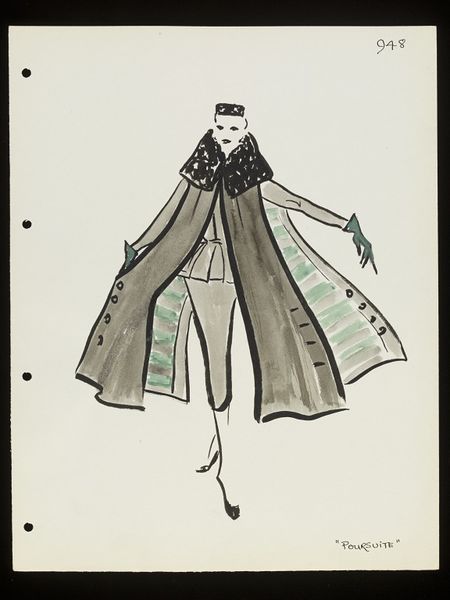 Over the last few years I have been working through a remarkable collection of over 9,700 fashion designs from the House of Paquin. Covering the period from Winter 1897 to Winter 1953-54, these designs (many bound in impressively hefty volumes) were acquired in 1957 following the 1956 disestablishment of the Paris House of Worth, who in 1953 had merged with Paquin.  For the purposes of this introduction and overview, I have chosen to focus on tailored daywear following the theme of the first and last designs to be accessioned.

This is the earliest Paquin design to have been entered into the system – a day costume from 1897, although the couture house of Paquin opened in February 1891 as a present from Isidore Rene Jacob dit Paquin (1862-1911) to his new bride, Jeanne. We do not have any confirmed Paquin designs of an earlier date than Winter 1897.  Jeanne Paquin (1869-1936) was one of the first women to head up a couture house, although not – as is often claimed – the first. The grand male triumervate of early French couture in the mid-19th century – Charles Frederick Worth, Jacques Doucet and Emile Pingat – actually had a contemporary female rival before Paquin – the house of Laferrière. Despite being just as successful and highly regarded, Madeleine Laferrière is rarely cited alongside her more prominent male contemporaries.

Jeanne Paquin retired in 1920, handing over design responsibilities to her assistant Madeleine Wallis. Wallis was particularly renowned for her creative use of fur, using it to great effect.  There are over 4,000 designs by Wallis in the collection.

Paquin died in 1936, and Wallis retired the same year. Until 1941, Wallis’s former assistant, the rather colourful Spanish designer Ana de Pombo, was responsible for design at Paquin. There are over 2,000 designs by de Pombo (not including the 400-odd co-designed with Wallis between 1934-35) in the collection.

de Pombo’s assistant, Antonio del Castillo (1908-1984) took over as head designer to keep Paquin  running through the War and the German Occupation. In 1945 del Castillo left Paquin to become a designer for the American entrepreneur Elizabeth Arden, later returning to Paris to head the house of Lanvin (rechristened Lanvin-Castillo during his time there) and subsequently opening his own short-lived couture establishment in the 1960s. There are only 10 designs identified as being by Castillo in the V&A’s Paquin holdings.

Colette Massignac headed Paquin from 1945 to 1949. She had the difficult role of keeping the house going in the immediate post-war years, and maintaining its credibility in the face of rivalry from newcomer Dior’s much-publicised ‘New Look.’  The V&A hold 228 designs by Massignac.

Between 1949 to 1953, Lou Claverie – a designer of Basque background – headed the label. His designs are lively, inventive and often show a sense of humour and wit. There are 193 designs by Claverie in the V&A.

Over 9000 designs later, the final Paquin design to be entered into the system is a suit with incorporated stole for Winter 1953-54 designed by Alan Graham. As a young, relatively unknown American, Graham was seen as a bold unexpected choice to head up a Paris couture house, particularly one with such a long standing legacy as Paquin. However, Graham’s minimalist, youthful designs failed to reinvigorate the historical brand, and the house of Paquin closed on 1 July 1956. The V&A hold only 46 of his designs.

This is not a complete run of all the Paquin designs from 1897 to 1953. Some years are better represented than others – 1900 is covered by only 20 designs for the whole year, and an entire volume for Summer 1909 appears to have been lost before it entered the Museum. The post-1940 collection (which was not bound in volumes) is fragmentary with large chronological sections missing or incomplete. At the time of its acquisition, the Worth and Paquin Archive was divided between the V&A, the Archive of Art and Design, and the Fashion Museum, Bath. The V&A took most of the bound volumes of designs, a huge collection of historical engravings and fashion plates used as reference material, and many loose designs, while the Archive of Art and Design took a lot of documentation and photographic records. A lot of photographic material and many loose designs were also acquired by the Fashion Museum, who are currently in the process of cataloguing their own holdings. It is possible that many of the gaps in the V&A’s holdings could be completed by cross-referencing with these other archives.

I plan on showing more highlights from the Paquin Archive in the near future!

Thank you Margaret! So pleased that you enjoyed the article.

Please forgive the delay in responding to you. If you have not already done so, I would encourage you to email the Textiles and Fashion Collection regarding your Paquin gown, at textilesandfashion@vam.ac.uk.

My mother just gave me a crib blanket made of silk with a Paquin label and Paris address. Also a sham. It is embroidered with flowers. It was given to her by her aunt who lived in California. I cannot find anything on this blanket. Any assistance would be appreciated.