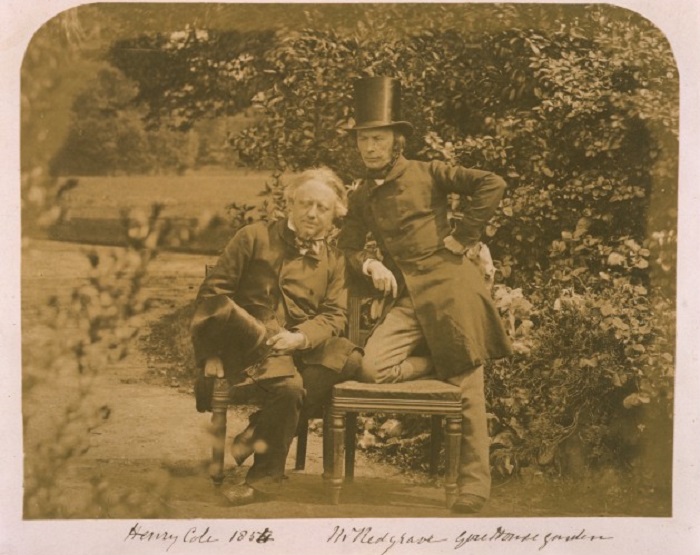 You’d think that the opportunity to travel around Italy at the Museum’s expense, hunting for priceless late Medieval and Renaissance treasures to send back to South Kensington, would have been considered by a nineteenth-century curator as one of the perks of the job. Not so with Richard Redgrave.

Redgrave was a painter and arts administrator; he was also Henry Cole’s right hand man at the South Kensington Museum. In 1859 he accompanied Cole on a tour of Northern Italy. He kept a diary of this tour, writing the day before setting off, ‘To-morrow, Samuel [Redgrave, Richard’s brother], Cole, and I hope to start for North Italy. God give us a good journey and bring us back safely to those we love’. Here we can detect, perhaps, the slightest hint of Redgrave’s dislike of foreign travel. An entry in Cole’s Italian Journal, in which he records an anecdote about Redgrave quarrelling with a French waiter because he thought he was being over-charged for wine, leaves us in little doubt that Redgrave must have been difficult travelling companion. In fact, Cole noted wryly that even ‘S Redgrave got out of humour at his brothers obstinacy & stinginess’.

The diary extracts of the 1859 Italian tour reproduced in Redgrave’s printed Memoir make no reference to shopping for objects; they are concerned almost exclusively with his impressions of paintings and, to a lesser extent, architecture. ‘I was not much struck with Turin, or with the art there’, he declared flatly, ‘the pictures are ill-arranged’. By contrast, of the Benozzo Gozzoli murals in the Campo Santo in Pisa, ‘I am struck far beyond all my expectations. The individual characters of the heads, the just and well-considered attitudes, the expression, the action, and, in many cases, the drawing of the hands, as well as the natural disposition of the draperies, delight me’. This emphasis on Redgrave’s art historical connoisseurship is certainly an editorial decision rather than evidence of a lack of involvement in purchasing objects for the V&A.

In fact, evidence of Redgrave’s shopping activities can be found among Cole’s papers. In 1860 he returned reluctantly to Italy, this time in the company of J. C. Robinson and Charles Drury Fortnum: Cole recorded in his diary, ‘RR grumbling as usual: & disliked going to Italy he said’. Cole also noted that he had ‘arranged with Robinson and RR that South Italy must be visited before purchases in the North are decided on’, presumably because he and Redgrave had plundered this part of the country the previous year. Once in Italy, Redgrave found plenty to complain about: he wrote to Cole from Naples about a ‘continual sirocco’ that had resulted in visitors experiencing ‘bilious attacks’ while he himself had suffered a fall that had left him ‘very stiff and sore’ (1).

In this letter to Cole sent from Florence on 24 October 1860, Redgrave reported that he had received a tip-off regarding ‘an object of great importance’, this altarpiece commissioned by Jacopo Bongianni in the 1490s for a now desecrated chapel near the Pitti Palace. Redgrave dashed off a sketch to give his boss an idea of its design.

In the official report that he submitted on his return to the Department of Science and Art, Redgrave wrote:

“Went to see an altar in a desecrated chapel near the Pitti Palace. It is a circular-headed altar under a recessed arch, the period later in the 15th century (quattro cento). The style is very different from that purchased last year from Fiesole, perhaps the whole less enriched and not quite equal in workmanship. The fittings of the whole chapel, which are of the same material as the Lavello purchased last year, and the style of the school of Brunelleschi, may be had with the altar, perhaps without increase of price.”

Redgrave, however, clearly did not find this aspect of museum work particularly enjoyable or edifying. He wrote to Cole with stoic resignation from Florence that ‘the looking over heaps of dust-covered articles, in the hope of discovery, is unendurably tedious, and wearying, but it is business and must be done’. This aspect of curatorship he regarded as a necessary drudgery. Nor were the practicalities of travel any more appealing: in his personal diary, Redgrave complained about its hardships, ‘in a twenty-four hours’ journey [we] never stopped for food’. I think we can sympathise with him on this occasion!

On 10 December 1860, Cole noted in his diary, ‘RR suddenly appeared from Naples’. Redgrave’s private notes, however, leave us with the distinct impression that for all the suddenness of his appearance, he couldn’t get back to London quick enough!

What a different world it must have been 150 years ago! i was wondering if this archive is publicly accessable. I would be very interested in connection with a project I am working on regarding Italian art.

I really like this historical account. It brings to mind current holiday makers who complain and grumble when visiting a foreign land. I suppose that for Redgrave, Italy was just for business