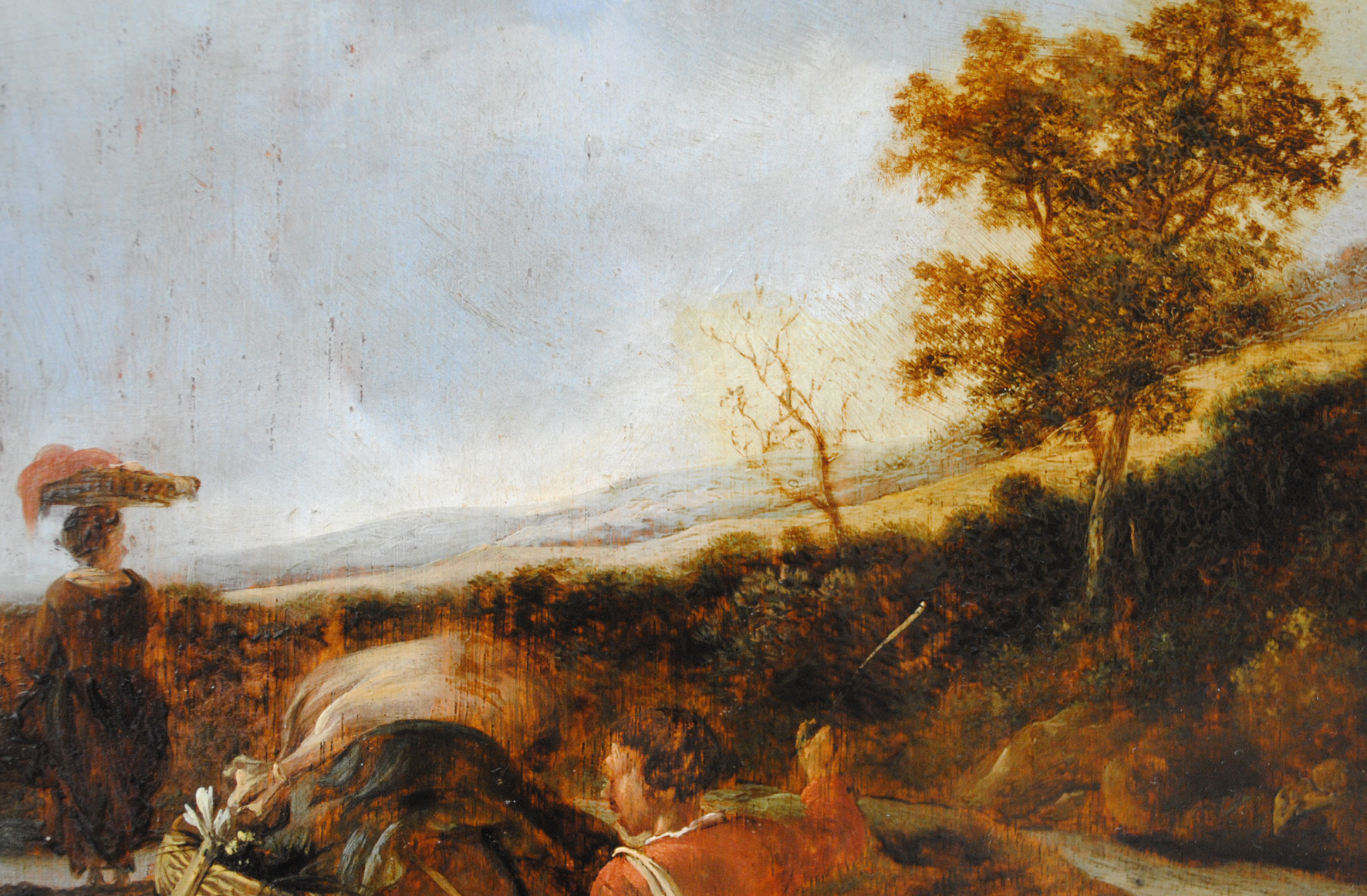 Conserving paintings often leads to interesting discoveries, but what I found during the treatment of this painting was a little more (and less) than I expected! The painting in the pictured below,  ‘A peasant driving a laden mule’, by Jan Both, ca. 1645, museum number CAI.81, is undergoing conservation to prepare it for display in the paintings galleries. I proposed to remove the discoloured varnish, as this was making the clouds appear yellow, and hiding the delicate brushwork of the foreground.

As I cleaned the picture, using an organic solvent mixture, I could see the details of the painting much more clearly, and also the colour of the wooden panel shining through the brushstrokes.  The wood grain is partly visible through the paint film, as the paint becomes more transparent over time.

To investigate the paint structure, I took some tiny paint samples and mounted them in polyester resin to look at them in cross-section with a microscope. With assistance from our Science Department, I could see that only layers of paint and no white preparatory ground layer are present, which is fairly typical for seventeenth century northern European panel paintings. The image of the paint cross-section below shows the paint mixture used for the sky (bottom layer: lead white and smalt), as well as other brown and orange layers which belong to the foliage.

But the most interesting discovery actually concerns the wooden panel support, rather than the paint layer. As I examined the painting out of its frame, I was surprised to see that this picture is only half a painting! Instead of having a tapered bevel and thinning at the edge, the right side of the panel is thicker, and has remnants of glue down the edge. On the reverse, further glue residues are also apparent along this edge, probably from a fabric reinforcing strip adhered across the join between two boards, as can be seen in the image below.

From this evidence, it’s likely that there had previously been another board adhered here, indicating that this small panel was probably once part of a larger painting. The painting was bequeathed to the Museum in 1900 as part of the Ionides Bequest. The picture can be seen in the image below hanging in the home of Constantine Alexander Ionides at 1 Holland Park (at the top left in the image below). He purchased the painting from Christie’s on 20 March 1882, so the V&A picture and its other half must have parted company before then.

I would be fascinated to find the missing piece of this painting. The composition is interrupted at the right edge, so the other part is probably a landscape, but in a vertical or ‘portrait’ orientation because it’s likely to be of a similar size and format to the V&A half of the picture. Our Science Department took an x-radiograph of the painting for me, and this can be seen below. From this x-ray, we can see the distinct pattern of the wood grain, and it’s likely that the missing piece has a similar grain pattern. It would also be unlikely to have preparatory ground layer, in keeping with the layer structure of the V&A painting. Can anyone out there help find the missing piece?