This is the second in a series of blogs following the treatment of an object for the new Cast Court Interpretation Gallery, which will be opening to the public on the 1st December. This object, Repro 1868D-138, is one of four copies of the Milton Shield, and the original is currently on display in Gallery 122 in the British Galleries. This object is possibly one of the most copied objects made in the19th century, and for more information about the original please see: http://collections.vam.ac.uk/item/O71163/milton-shield-shield-morel-ladeuil-leonard/ 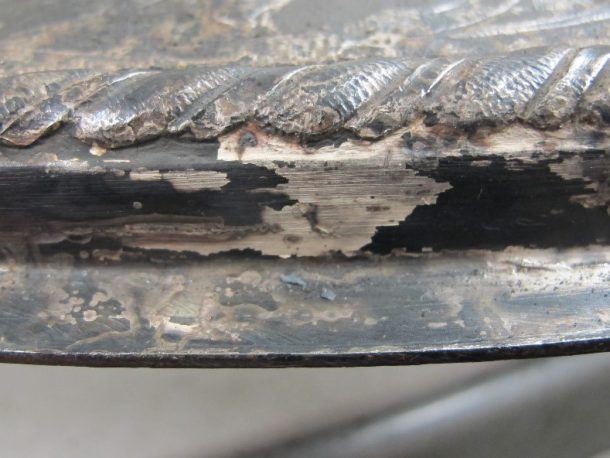 In some areas on the shield the deliberately darkened surface has continued reacting and the finish has thickened so much that it has peeled off leaving a matt white silver surface underneath. Occasionally on very old objects you can see where this has happened several times over the centuries and the surface ends up looking a little like wood grain. Although pure gold does not tarnish, if used with silver the silver tarnish can creep over the gold surface.

We never use chemicals on deliberately oxidised surfaces as it is easy to over clean and remove the colour. All the tarnish on the Milton Shield electrotype was removed using mechanical means, such as brushes and silver cloth followed by wiping with a solvent to remove any traces of grease.

After 65 hours of work the Electrotype Milton Shield is finally finished. All the parts have been cleaned, degreased, reassembled and lacquered with a cellulose nitrate lacquer. Areas where the darker oxidised surface has worn away have been retouched with conservation paint so that the design can be more easily seen. The shield is now ready for it’s starring role in the new Cast Court Interpretation Gallery which will be opening to the public on the 1st December 2018