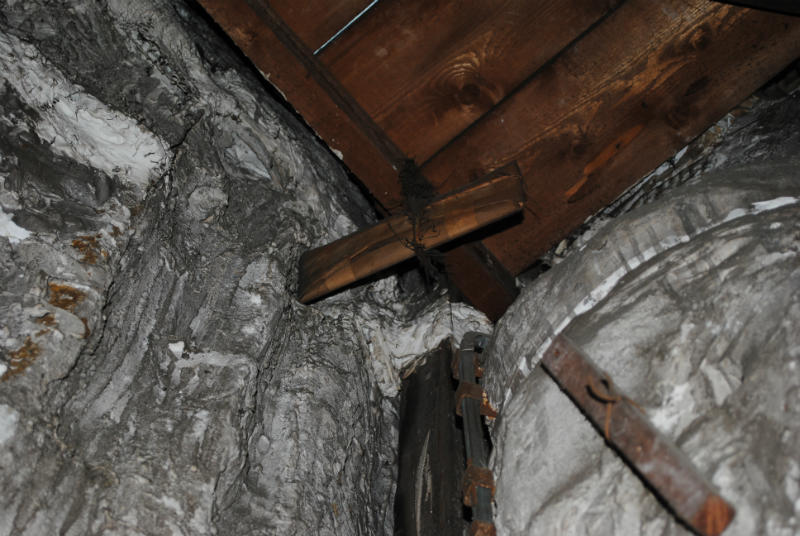 The secret parcel and other discoveries from the Weston Cast Court.

In my previous post I described some of the surprising items we found in the museum’s Medieval & Renaissance and British Sculpture galleries. The things that we found were type of messages from the past left by the people who worked in the museum long time ago. They were the unknown craftsmen who left us small clues of their existence from a long gone era. These discoveries, small as they are, have taken us on journeys back in time and we have learned a little bit about the life of our predecessors.

During the three year period while the Weston Cast Court was under renovation we had a wonderful opportunity to study and conserve the collection of hundreds of 19th century plaster casts. The job was a real challenge as we could hardly find any information about the casts in terms of their conservation history, or the individuals who would have looked after them. We noticed that most casts had been cleaned, coated and repaired a number of times and I was also told that various craftsmen with different skills who would have cared for the collections in the past. Even the British Army looked after them during the war and it may be may be that the cast makers who had a workshop in the museum’s back road might have also restored them occasionally.

During the time the Weston Cast Court was under renovation, for the first time in decades, the casts that were against the walls, were taken down or made accessible so we could evaluate their condition. While cleaning the insides and backs of various monuments and other casts we began to find interesting things concealed under dust and debris.

While working on a copy of a mosaic panel, which now hangs on the West wall of the Italian Court, directly above the Giovanni Franchi’s electrotype copies of Gates of Paradise, I discovered some faint writing on the back of the object. After looking closely I noticed that the people who had built the wooden support for the panel had scribbled their names onto the wood.

Then more discoveries started to emerge. While inspecting the cast of Nymph of Fontainebleau, made by a famous Parisian cast maker Leonard Desachy, who also created Moses, I discovered again signatures at the back panel. They had  also noted an important event on the back; ‘30 March 1889, Oxford Cambridge Boat Race, Cambridge won.

I was beginning to hope that the people from the past would have hidden something more substantial somewhere in the gallery, but where? Then one late summer morning I stumbled upon something exciting. I was working away trying to stabilise flaking paint on the surface of the poor Nymph. The cast had been taken down from a wall and it stood in front of a Tomb for Cardinal Ascanio Sforza, to the left of Michelangelo’s David. I got up to stretch my legs and decided to take a closer look at the tomb monument, which was my next job on the list. I noticed a small door on the left, which for some reason I had missed before. (Many of the monuments in the Cast Courts have doors leading into the insides and these spaces were used to store equipment. Apparently some of the workmen used to have their cigarette breaks inside the Trajan column and smoke could be seen drifting out from the top.)

The door was open and I quickly grabbed my torch and stepped inside the monument. Part of the wall which it stood against had still its original decoration that had survived undisturbed throughout the 1980’s refurbishment.

On the floor was a contemporary model of the Cast Court. I had a really good look at the core of the monument hoping to understand how it was put together, but I was also secretly wishing to find something, a note, a signature or a dead mouse perhaps! Suddenly I spotted something unusual hanging right above my head. It looked as if it could had been a piece of wood, but after staring at it for a minute or two, I realised that it was an old parcel, hanging from a small piece of string. How was it possible that it had gone unnoticed? I asked my colleague to help me to take the the parcel down and after immortalising the historic moment with our camera we opened the parcel.

Inside under the wrapping paper we found a Daily Mirror dating from Thursday May 13, 1937. It turned out to be a special coronation issue dedicated to George the VI. On the bottom of the page read;

The moment of Majesty; ” Archbishop taking the crown from the Bishop of Westminster, places it reverently upon the King’s head. At the sight whereof the people, with loud and repeated shouts, cry, GOD SAVE THE KING.”

Inside the fragile newspaper we found an envelope which read; ‘On His Majesty’s Service’. We opened it carefully and pulled out a letter.

The letter described that the monument had been brought to the museum from from the Crystal Palace exhibition, which was destroyed by fire on the 30th November 1936. The letter was signed by the people who had erected the monument. I took the parcel and its contents to our studio and consulted the museum’s paper conservation and curatorial department on what to do with the contents. Senior Paper Conservator Victoria Button cleaned, pressed and wrapped the items in acid free tissue and melinex and placed them in a box. Once they were packed they were taken to the curatorial archives where they are currently hidden among other important documents.

High up on a wall on the West side of the Italian Court stand propped up against a wall, three spandrels from Italy. Their side panels were removed so we could get access to clean the backs. Tucked inside one of the spandrels on the far right, buried under mountains of dust, was a wrinkled up newspaper. After our paper conservator’s immaculate cleaning regime, I was able to see what the newspaper was about. It turned out to be from an old Daily Telegraph, dating from 1882.

Tea time is any time

As if we hadn’t found enough items hidden behind the objects, there was more to come. One day when I was clearing our tool cupboard I found a bag full of wrinkled up bits of paper. I have no idea where the items had came from or who found them, but I took them to my desk and called Victoria to discuss which pieces were worth treating. We decided to conserve the most valuable items, including a bag of ‘Brooke Bond coffee and chicory essence’ with a lovely poem written by a schoolgirl about drinking tea.

A bag of folded newspaper articles which the museum’s technicians found under a relief Virgin and Child with Saints made by Salviati and Co.

After handing over the dirty, wrinkled up bits of paper to Victoria, she carefully cleaned them with chemical sponges, which are widely used in conservation for dry cleaning various surfaces. Many of the papers were either in bits or crumbled. She then sprayed them with water to relax and unwrinkle them, where she could. Sometimes she gave them a wash by immersing them in water and then aligned torn pieces while slightly wet, as it makes it easier to manipulate them back in place. Finally she pressed them between blotting paper and bagged them in melinex.

The amazing finds are at the moment sitting on my desk, but we are aiming to put them all in a box and send them to the museum’s archive. Meanwhile, I’ll be on a lookout for more discoveries, especially when we start working on the other Cast Court gallery.

I would like to wish my warmest thanks to Senior Paper Conservator Victoria Button for her help in conserving the finds.

I think that these finds are amazing, and I’m so glad that you looked for them and have preserved them. I do hope that, in turn, similar time capsules are being placed inside the items now.

It is very cool to see behind the scenes. I love seeing those time capsule glimpses into the past. I especially like to see the “accidental” pieces when workers forgot to take something with them.

Hello, Is there anyway I can contact Johanna Puisto? I am a student at the University of Leeds and would love to email about career advice on her role in V&A.