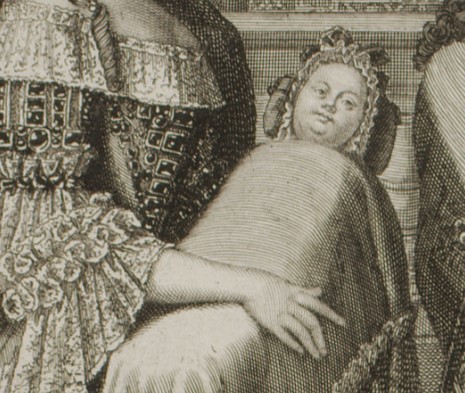 Images of Louis XIV played an important role in celebrating, commemorating and promoting his power. Many survive on decorative objects, charting his life from cradle to grave.

Almanacs (a type of calendar) were often used to depict the heroic exploits of Louis and his family with illustrations and verses depicting wars, royal weddings and births and important political developments that had taken place the previous year.

This almanac was produced for the year 1705. The upper section shows Louis XIV presenting his new-born great grandson, the duc de Bretagne, who was born on 25th June (today!) the previous year. It will feature in the Louis XIV display in the Europe Galleries.

Prints Curator Frances Rankine has explained that almanacs like this were relatively inexpensive and ‘would have been sold as popular prints in print shops and hung on a wall in an interior for reference to important feast and saints days.’ Printed in Paris by Antoine Trouvain, it is likely that this would have adorned the homes of numerous Parisians.

It is inscribed in French:

‘Heaven’s blessing on the descendants of Louis the Great at the birth of Monseigneur le Duc de Bretagne on the 25th June 1704 and the public rejoicings, with the conquests made in Piemont and Savoy by Monsieur de Vendôme and Monsieur de la Feuillade’

Frances Rankine has further described the role of almanacs in promoting Louis XIV’s image and power:

‘From 1661 until his [Louis’] death in 1715, as many as five hundred and twenty different almanacs were published. About ten of these prints were produced each year.

It appears that deciding the subject matter of these almanacs was not the sole responsibility of the printmakers and publishers of the Rue St Jacques and there was a degree of collaboration with the Court. Jean Baptiste Colbert, the King’s minister, who implemented a systematic organization of the arts in France between 1661 and 1666, used the potential of printmaking to promote the image of the King, and would have demanded a degree of control in the subjects to be portrayed.

Apart from their practical use as calendars the aim of these almanacs was to portray the actions of an illustrious monarch and publicize the semi-divine character of the King. This engraving demonstrates the importance Louis XIV attached to family and to the Bourbon dynasty.’

In a manner comparable to recent magazine coverage of 2015’s own recent royal birth, the baby is depicted surrounded by key family and Court figures.

To the left of Louis XIV, the baby is held by Charlotte de la Motte Houdancourt, governess to the royal children. Between Charlotte and Louis stands the child’s father, the duc de Bourgogne. As you can see, a lot of effort has been taken to depict everyone’s clothing with meticulous detail, helping to really ‘show-off’ the rich, splendor of Louis and his court.

The new-born’s mother, Marie Adelaide of Savoy, can be found in the background looking rather tired and perhaps a bit forlorn. She is lying in a state bed which creates the suggestion that she has only just given birth. Although named in the print’s title, I think it is interesting that, unlike those in the foreground, she is not directly identified by engraved text. Perhaps it was simply thought unnecessary (as she is the one lying in bed) but it does add to a sense of her being pushed into the background, as Louis’ male lineage is celebrated.

The lower part of the print features vignettes showing various public rejoicings of the birth, such as fireworks and illuminations in Paris and Versailles.

The calendar was printed separately on two sheets, in red and black letterpress, which were then pasted either side of a depiction of the Duc de Vendôme. Below, you can see how it gives the phases of the moon for each month along with listings of important Saints days and public holidays, some of which are highlighted in red.

Dear Martha,
In order to prepare for the opening of the Europe 1600-1800 galleries we’ve had to transform the Museum’s basement gallery spaces – a substantial and complex undertaking. We have stripped back the outdated 1970s interiors and have successfully completed work to increase available space by a third. The Museum has remained open throughout and disruption to visitors has been kept to an absolute minimum.
All major building projects are likely to involve new and unforeseen complexities that arise once on site. In this case, it became apparent by mid 2014 that in order to complete the project to the highest possible standard, we would need to allow more time. We amended our schedule in light of this and having continued to monitor progress carefully, have made the decision to move the opening to later in the year. A new opening date in late 2015 is shortly to be announced.
Best wishes,
Dawn