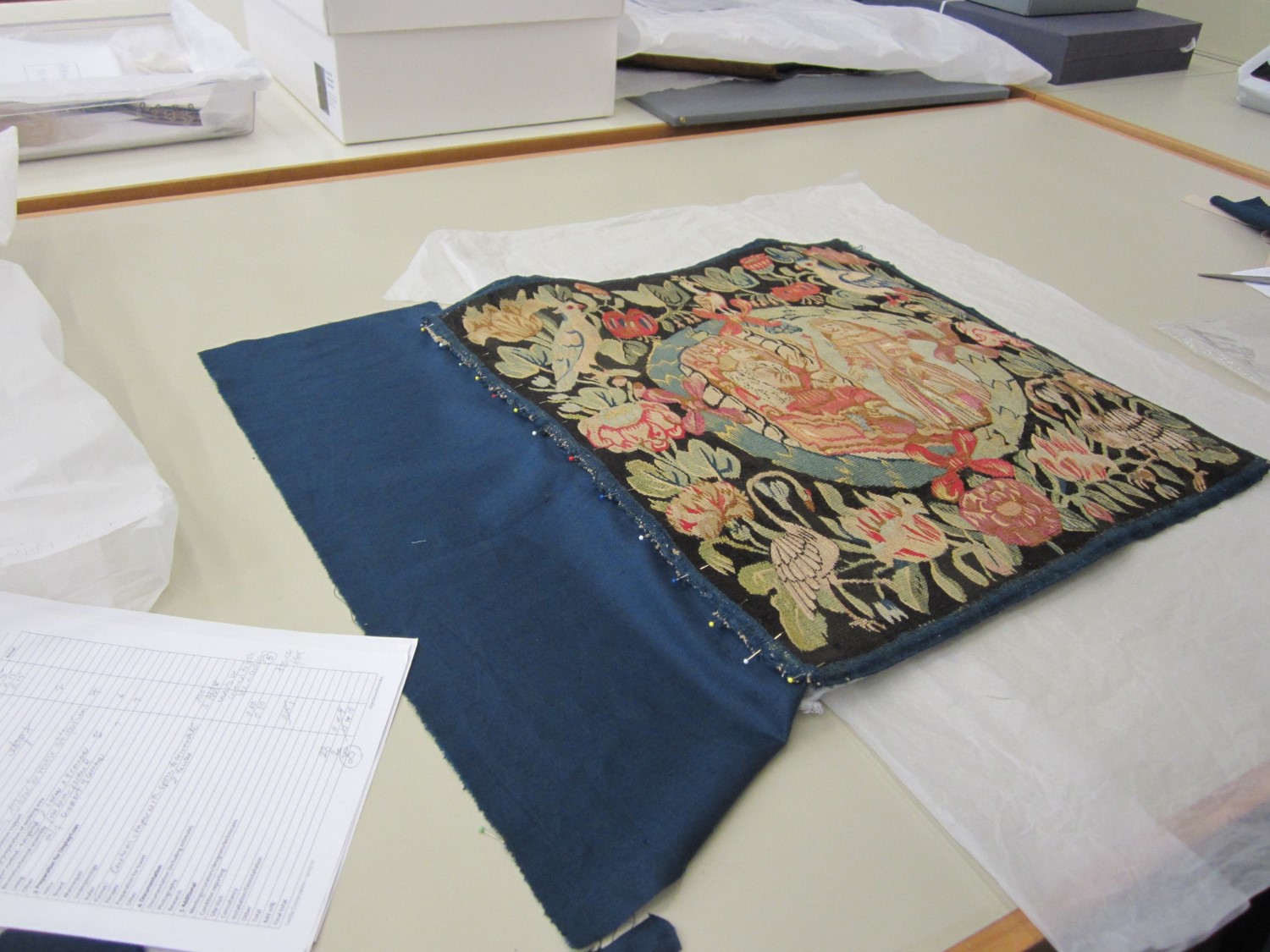 With the weather getting that bit nippier out there, it’s rather nice to turn our thoughts to home comforts. However in this case it is the home comforts of a 17th century Dutch household.

This tapestry cushion cover will feature in our Dutch Domesticity display.

In 1648, after a long military struggle, the Dutch Republic was recognised as an independent state, free from the political and religious domination of Catholic Spain. The new Protestant republic was the most powerful trading nation in Europe. The economy prospered and many people came to have more money to spend on domestic comforts, particularly textiles.

This cushion cover depicts a scene from the Old Testament story of Esther and Ahasuerus, when Esther intervened to prevent the massacre of Jews in the Persian Empire. The choice of this story may reflect the repression of Dutch Protestants when the Netherlands were under Spanish rule.

This same scene can be found depicted elsewhere in the Museum’s collections.

Esther was the wife of  the King of  Persia. The King allowed his chief minister to order the massacre of all Jews in the Persian empire. Esther, who was Jewish,  risked her own death  by approaching the King unbidden, to intercede with him to  save her people. The scene on the cushion shows Ahasuerus seated on a throne under a  canopy, extending his sceptre to Esther standing before him, to indicate his  approval of her request.

The dating of the cushion was partially guided by the clothing worn by the figures. Esther is wearing fashionable dress of the 1650s to early 1660, so the cushion cannot be earlier than this in date. However, it may be a little later, perhaps produced by someone working from an earlier print source.

I have to admit that, at first glance, the areas of re-weaving on their faces did lead me to entertain the idea of a story involving a bearded lady and a king with the face of a bulldog! – This image has really stuck in my head, so I hope its suggestion doesn’t ruin anyone else’s enjoyment of it.

But let’s return back to the subject of comfort.

This whole post was prompted by the fact that a few months ago I received a call from one of our textile conservators asking for advice on ‘how fat the Dutch liked their cushions’.

As you will have seen in the photographs at that start of this post, the object is a ‘cushion cover’ but only consists of the ‘top’ decorative side of the cover. To help clearly convey that its original purpose of it was not to simply be a flat textile, we decided that it should be displayed in a manner that suggested how it would have appeared as a cushion. This meant that our textile conservators needed to attach the cover to a backing, with ‘stuffing’ to create a more three-dimensional form.

But just how stuffed should it be? – did the Dutch opt for pleasurably plump cushions or thin slabs more concerned with the display of designs than practical comfort?

This led to my carrying out some detective work, with the help of numerous paintings of Dutch interiors from around the middle of the 17th century, such as the examples below.

The tassels on the cushion above are interesting, particularly as our cover has two multi-coloured tassels attached to the back.

The exact function of these tassels is not clear as they are not at the corners of the cover and are attached in such away that they would not be fully visible if a backing were attached around them. Perhaps they were previously attached to two corners of the cover’s original backing and when that backing deteriorated or was removed, the tassels were also removed but then reattached here for safe keeping.

Having supplied lots of contemporary guiding images of stuffed cushions to our textile conservators, it was a joy to next see the cushion when it was brought out of their studios for use in a display mock-up a few weeks later with its new ‘wider waistline’.