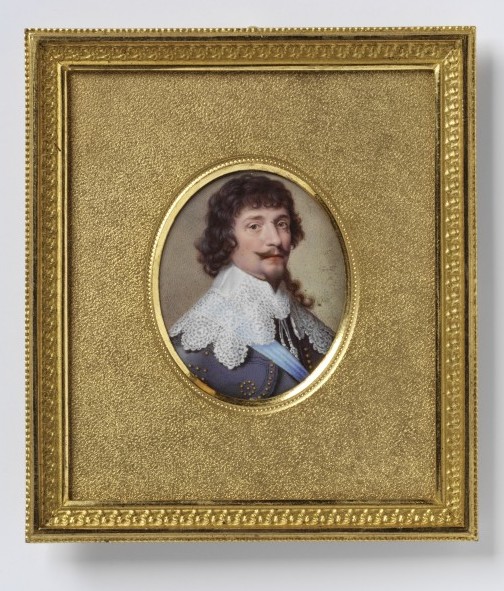 Given the attention I paid to his wife’s birthday last week (‘The Winter Queen’ Elizabeth Stuart, Queen of Bohemia), it would be rather remiss of me to not note that today marks 418 years since the birth of Frederick V. He will be gracing us with his presence in the Europe Galleries in the form of this bright enamel miniature.

He may be most well-known for his short reign as King of Bohemia (1619–20), for which he is often nicknamed the ‘Winter King’, but having done some reading up on his life, what Frederick’s name now conjures up for me are images of the wonderful garden he commissioned for Heidelberg Castle (Germany).

The Hortus Palatinus, or Garden of the Palatinate, was a Baroque garden in the Italian Renaissance style which Frederick commissioned for his new wife, Elizabeth, in 1614.

After their wedding, Frederick returned to Germany ahead of his new bride and started work to renovate his palace. He created an ‘English wing’ for Elizabeth – clearly a gesture to encourage her to feel ‘at home’ in her new abode. What caught my eye was that features of this ‘English wing’ included a monkey-house and menagerie. The renovation work included the development of a new garden in the Italian Renaissance style which that was so popular in England at the time.

The garden was designed by Elizabeth’s own drawing master the French hydraulic engineer, garden designer and author Salomon de Caus. Frederick had met de Caus, along with the English gardener Inigo Jones, during his time in England – perhaps this was when discussion of ideas for the garden had first begun. De Caus was renowned for garden designs featuring magnificent waterworks and other mechanical features. He was fascinated by machinery and experimental automata and in 1615 wrote Les Raisons des forces mouvantes (The Principles of Moving Forces) in 1615.

De Caus became architect to the Palatine court and began work on all of the palace’s gardens around July 1614. The work was extensive and one major challenge that the gardeners and engineers working on the gardens faced was the mountainous terrain surrounding the castle which all had to be restructured into a vast multi-leveled terrace.

Between 1614 and 1619, numerous new elements were created in the gardens, including an orange grove of mature orange trees which transferred to the garden using methods devised by de Caus. The gardens came to populated and furnished with numerous statues, grottos, plants, flowers and large trees.

A variety of exotic plants form the recently-discovered tropics were included and often displayed in a lay-out reflecting their geographical origins. Other dramatic features included mazes, a water organ, musical clockwork automata birds, and a recreation of the legendary animated statue of Memnon. These rather theatrical elements resulted in an impressive Baroque garden within an Italian Renaissance style framework.

In 1620 de Caus published Hortus Palatinus, an illustrated essay on his work at Heidelberg. It proved to be one of his most influential works.

The Hortus Palatinus became famous across Europe for the innovative landscaping and horticultural techniques involved in its design and it was often referred to be contemporaries as the ‘Eighth Wonder of the World’. However, the garden was to be one of the last works commissioned by the prince electors and was never completed.

Heidelberg and the gardens suffered a rather unfortunate time during the Thirty Years War, with the ornate gardens at times being used as an artillery base for attacking the city. The parterres, hydraulic machinery, musical devices and other games and tricks were all destroyed. Today, some remaining landscaped terraces and other remnants can only provide us with hints of the awe-inspiring scale of this ambitious gardening project.